Summary and conclusion from meeting about the future of Blivande and The New European Bauhaus, 2021-02-11

Also posted on the Blivande forum.

Summary and conclusion from meeting about the future of Blivande and The New... 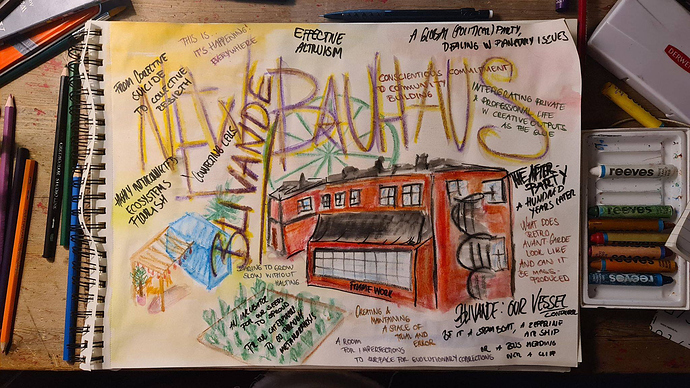 On February 11, 2021, House Blivande hosted a seminar to discuss how to create beautiful, sustainable and inclusive ways of living (formulation taken directly from the New European Bauhaus explicit intentions), partly with a wish of mapping out challenges and visions for our own community building, and partly to discuss what that could mean in connection to The New European Bauhaus. The discussions were based on a template offered by The New European Bauhaus, but adapted to our own needs and the size of the group, and was conducted through a mixture of moderated talks in the big group, and in smaller break-out rooms. The participants were asked to bring with them an object or an image/photo that represents for them Blivande and The New Bauhaus with its present and future ecosystem according to their experience. These objects/images were the basis for the discussions.

The seminar started out with the moderators making a brief introduction of Blivande as an initiative and movement, and some explanations to how the New European Bauhaus-project is defined by the European commission. This was followed by discussions in four smaller break-out rooms where every participant had their chance to talk about their personal and professional relation to these concepts, with a moderator asking questions based on the template given by the New European Bauhaus. Finally, we ended the seminar with a summarizing group discussion in the plenary.

The seminar was open to anyone, and the invitation was spread throughout the community around Blivande. It included around 20 participants, consisting of artists, entrepreneurs, philosophers, engineers, architects and community organizers among whom some were closely connected to the core activities at Blivande, and some rather with a strong interest and/or curiosity about the initiative. 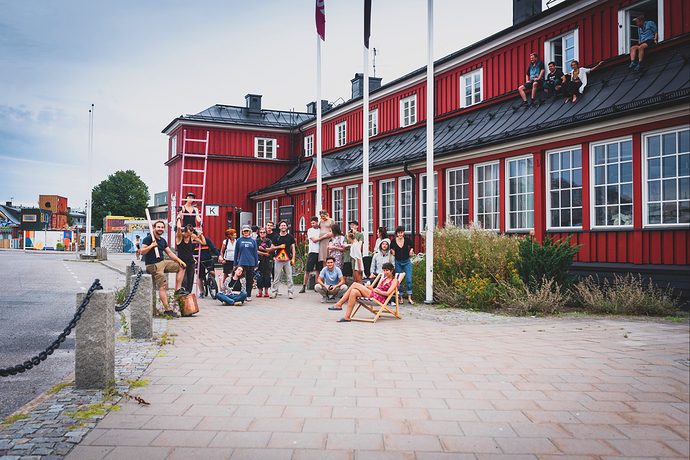 Blivande was founded in August 2018 with the explicit purpose of renting and maintaining a house for participatory culture and art. We believe that building networked ecosystems of creative people emerged in the principles of participatory culture can help meet challenges in society as a whole, and that the cross pollination, solidarity and tolerance that is required for diversity is cultivated through the ethos of participatory culture. Today, Blivande is based in a 1000 m2 house in Frihamnen, Stockholm, including maker spaces and studios for artists and artisans, venues for events, and a vivid open office-space for creative entrepreneurs, adjoint by Frihamnstorget, a square and container park where we hold events, make space for experimental art, and whatever fits the current projects of participants of the community. Circulating around Blivande, there is now a loosely knit but loyal community of around xx to xx people from a wide array of different disciplines and professions, from artists, artisans and creatives to engineers, organizers, programmers and much more. Through this cross-disciplinary foundation, a multitude of different enterprises and projects has emerged, such as the Plato Project (digital tools for participatory placemaking and collective stewardship), Babel Between Us (an experiment on co-creative writing where 18 authors from around the world is writing fiction together in a forum) and Noden (an independent association organizing participatory events for members). 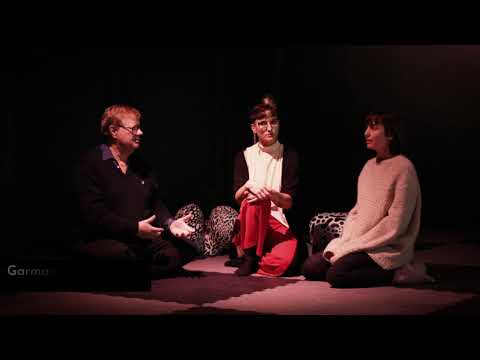 The New European Bauhaus is a project recently initiated by the European commission that promotes interdisciplinary, co-creative and sustainable communities where art and culture in combination with scientific research and engineering are an important part of creating a better future for society at large, and for the people living in it. The intention is to connect co-creative and interdisciplinary communities who can stand as examples of alternative ways of living and working together from all around Europe, in an attempt to illuminate visions for a better future. We at Blivande would like to explore what we could gain from including ourselves in a network of this size and ambition in terms of contacts, grants, knowledge sharing, and whatever else.

Discussions were held in smaller break-out rooms on personal experiences, based on the objects/images brought by the participants. The discussions in the smaller groups were quite diverse, but some red lines are traceable throughout them all.

For example, there seems to be a general desire for constructing systems and forums that enables and triggers real encounters and connections, both between people on a personal and creative/professional level, but also on a communal level between different communities and cultural hubs. There is a problematic tendency in contemporary society where we build isolated silos of like minded people which can be traced in everything from algorithms in social media to city planning. What we need is a cross-political overlap and the right formats to heal this divide. One participant noted that this can even be seen in the concrete way that our cities are built, where a mono-culture is created and people are isolated from each other in a very physical manner. This disenables real connections. Another participant pointed out that it’s not enough to just have a physical space where people meet; we need to find out what actually triggers the real encounters between people that enables a co-creational cross-breeding between different skills, disciplines and art forms. Blivande has the potential of setting an example for all of these things.

A friction in all of these reflections is the inevitable question of how to maintain a closely knitted yet diverse community that is at the same time growing in size, without the connecting elements between the people within it getting watered out. This is an issue that needs to be taken seriously while moving forward.

One participant also pointed out the difficulties in creating something new, something that does not have a clear place within the existing structures and infrastructures, which will lead to a paradox between the creativity and inspirational aspects of being in the forefront, while at the same time having to deal with pragmatic compromises to make it work economically, and the judging eyes from a rigid system that doesn’t understand what you are doing.

It is also quite clear that a lot of people see the community at Blivande as both an inspiring place to work, and as a place where one can find emotional support. There is an important aspect of the community building process here where the private and the professional gets intertwined in a way that is quite unique in comparison to, say, a normative office space. One member stated that she found, at Blivande, a community to help her believe in herself “and the possibility of a world in which [her] ideals, [her] mental health, [her] livelihood, [her] professional and private development could actually happen.”

Another clear tendency in the discussions were the historical references to community building and co-creational practices in the past, for example the Bauhaus group, but also to the Black Mountain College in the US. There are also interesting parallels between the political environment of Europe today, compared to the 1930s with growing populistic movements and quite a harsh political climate for cultural production.

One participant concluded that Blivande has a model that is quite unique and that she has not seen anywhere else in Sweden, due to the fact that it didn’t start up as a publicly funded initiative, and that the enterprise does not rely on the annual rounds of applications. This allows it to break free from the “brahmin-caste” of the Swedish cultural establishment, and to create something truly new.

Summary of the concluding discussion in the plenary 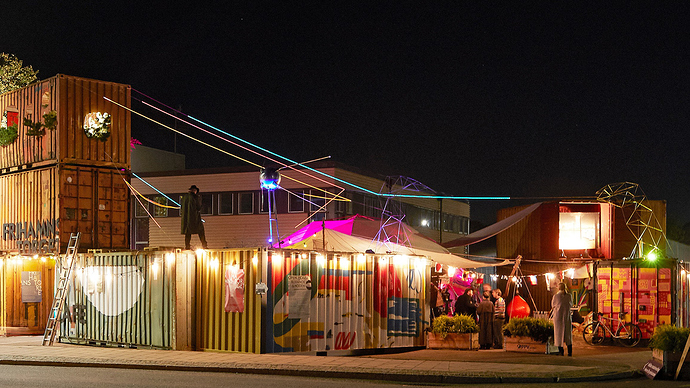 A recurring struggle for Blivande and similar initiatives is that you often have to compromise with the new-ness of the project to fit into existing structures (naming, governance, metrics of success, etc) enough to get access to opportunities and funding. The external infrastructure can become a hindrance to ambitions and radical internal ideas in the movement.

On the other hand, it was noted that for communities like ours, the future challenge is not “how should we be and create differently together” (we are already doing that), but rather “how can we expand what we already do in society as a whole”. There’s an issue here where we need to figure out how to prototype new ways of being for society and for the community around us, but at the same time safeguard what we have. How can we expand while staying healthy and alive as a community? This issue entails the struggle to spread our visions and ambitions into a broader society, without losing our original complexities and concepts. One way to expand lies in inclusion, to include people into the community. Another way is to actively spread the word of the community, to become self-replicating, fractal. One participant described Blivande as fertile, that we need some type of sexual organ that allows for replication and spreading.

It’s quite clear that we are good at creating a feeling of “home” for people who come to us, and that participants often find that they want to stay. But we will also need to pay attention to the factors that allowed us to become what we are today, to tell our story from the perspective of the people in it. We need to build the struggle to always go out of our bubble into the DNA of what we are doing, and to keep bringing gifts from out of our context. But while spreading, it’s important to keep the familiar feeling, to accept people in need and to accept the lonely, the emotional and the vulnerability of that familiarity.

The Bauhaus movement was forced to leave what they had built, which in consequence resulted in those ideas being spread all around the world. How can we achieve the same effect without the traumatic experience of getting the core taken away from us? Bauhaus also promised a “reunion of humans with nature through healthy living” as they had nature as a constant reference point. But today, it’s impossible (and not desirable) to ignore technology, and we must build with technology instead of against it, but with a healthy living as a remaining paragon.

@elch running his CNS plasma cutter to refashion old metal pipes into beautiful steel columns for our raised dome.
1 Like
Coming up: a meeting with FEBEA and DG GROW on the New Bauhaus
2021 Science Fiction Economics Lab - Keeping track