The brainstorming session at Solvay Business School: what happened and what's next

On Tuesday 12th November, the Sci-Fi Economics Lab ran its first session of brainstorming around writing papers for the new economics that the Lab is about. About 15 people participated in the meeting: among them, @matthias, @irene_1, @jean_russell, @fjanss, @teunvansambeek, @JasonCole, @Stef-Kuypers, @Jorge and others who, I think, are not (yet?) registered on the platform. Here’s what went on:

We then went over what we think 2020 looks like for the Lab. Things are still in flux, but we hope to do three things:

Mapping “hot topics” for the Lab

We spend most of the session discussing hot topics, defined as what people are actually working on. I started by attempting a very rough grouping on the basis of the replies I had received to the Call for co-authors; but there were several people in the room who had not responded to the call and, conversely, several people who had responded were not in the room. So Jean and others coordinated an effort to do that, in order to map possible collaborations. The results was the following list:

The exercise also mapped individual interests in the room (as people not in the room were not there to speak for themseleves) to these topics. The result was the following graph: 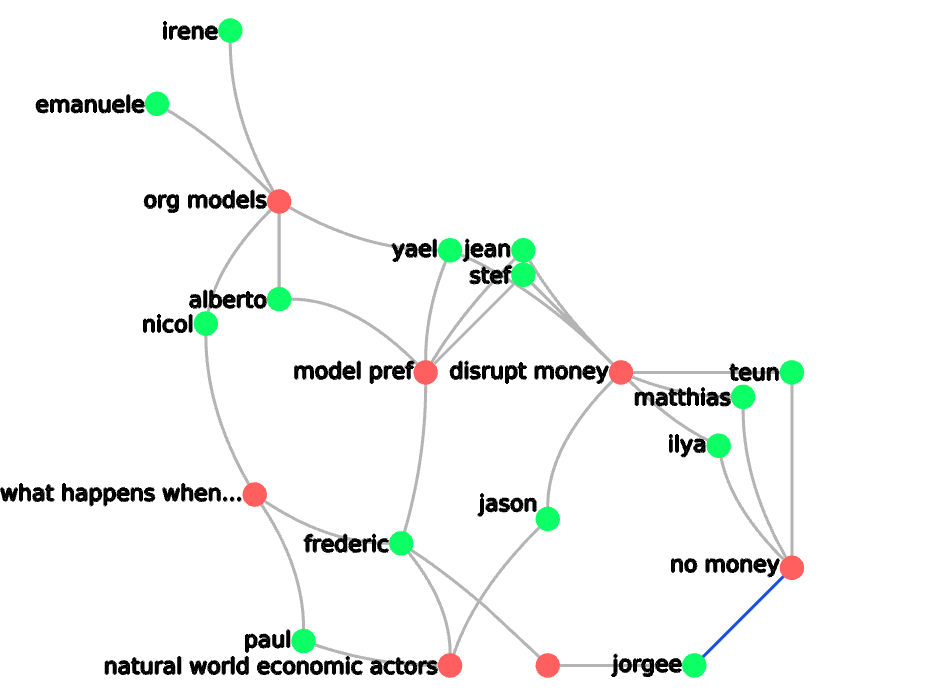 Output format and the role of science fiction

We are not yet sure what format the Lab’s output will take. At least two are possible:

We could even edit an anthology of papers + stories. Ideas and feedback welcome.

Thanks for the write up @alberto . Looks like it was a lively discussion, wish I was there!

Maybe it has been covered in the session but, sci-fi or not, papers such as the ones you describe need to captivate people’s imagination in order to be effective. Besides that, the only requirement I see is for the papers to be rigorous - after all we want to start a discussion and the material needs to stand up to scrutiny. I think there is an opportunity here, for papers not likely to be published in mainstream conferences/journals, to make an impact.

Same as you, I would like to get more doers involved. My ideal path to publication would be:

I like the topics you identified. If you keep updating the graph, you can put me under “Models for organizations and corporate governance” and “Computer modeling”.

Oh, and I would very much like to have Jean on board for the Org Models topic too

How can I make it happen? Name your price @jean_russell !

Thank you! We did talk about some of the people in the group being interested in writing sci-fi, the possibility that a story would be in parallel to papers, and that some people were more likely to write code than papers or stories. These output differences didn’t seem like a way to subdivide, although they were useful to be aware of. Hopefully those cross-pollinate.
Happy to participate in some work on Org Models. It is the topic I was considering writing a book on (though mostly focused on models that transition us to a commons-centric economy). And we can negotiate a value exchange but I prefer to avoid a price.

Pricing is in crisis.

Nice! Then let’s see what we can make of it - hopefully there will be an ‘offer you cannot refuse’ ™ somewhere in there

I would also like to see it cross-pollinating too. And if we add a useful take-away (perhaps in paper form?) to stories, we have fables right there

We did talk about some of the people in the group being interested in writing sci-fi, the possibility that a story would be in parallel to papers, and that some people were more likely to write code than papers or stories.

I stand corrected. Yes, I was taking it for granted. Editing the post now.

So, where are we at now? Next steps?

Lab-level: set up a minimal infrastructure (of which this group on Egderyders is the first building block); fundraise; strategize.

Lab rats level: collaborate on pieces of new knowledge (econ papers, or SF fiction, or both), discuss results, iterate. Here is a process that starts from a pre-paper contributed by one of us (@mstn) and is moving towards a first online seminar. I think you, Jean, have an email with a proposal from Frédéric, no?

Yes, I have an email from Frederic and a plan of action on that, but it is not a proposal for this group/action. Thanks @alberto

I have an email from Frederic and a plan of action on that, but it is not a proposal for this group/action

Would you consider also organizing a seminar on what you are working on? If we get the culture of doing that going, then we have (hopefully) some good thinking and content production. If this happens, I think the lab level will take care of itself.

That said, if you have ideas for the lab level I am listening! What could we do? Today, for example, I wrote a short document for a possible participation of EDGE to a research consortium and added a possible role for the Lab:

Edgeryders’ Sci-Fi Economics Lab fosters research on fictional economies, economies that do not exist, but could, as they are internally consistent. Its main goal is to imagine, and provide theoretical support for, radically different economic systems, as opposed to minor tweaks to the system we have. If it is useful, we could engage the Lab on generating and analysing transition scenarios, that could then be put to the online community for discussing (therefore helping to generate content). This would of course be a radical, almost utopian, characterization of the proposal.

I am sure you and others can think of other stuff…

but it is not a proposal for this group/action

And, breaking news, @nadia has accepted to lead the Lab’s development into 2020. So, Jean, if you have ideas there is the added benefit of going through them with her, who is far smarter than I.

I snort at you both @alberto. Nadia is differently abled. And @nadia I am at your service. Be brutally frank with me about what you want. If you see something you want facilitated, for example, let me know.
Currently I am making a game-like interface for creating Ostrom principle based governance for data commoning. Prototype coming shortly.

I’m also available to do some work for the Lab. I can help put together some projects and help shepherd some of the activities if it would help.

Currently I am making a game-like interface for creating Ostrom principle based governance for data commoning.

… for example, this is a great idea, and it would be more fun with some SF baked into it.

I’m also available to do some work for the Lab. I can help put together some projects and help shepherd some of the activities if it would help.

Yes, it would. Are you good at compiling information? The next thing is to document gracefully the material we already have, trying to return an idea of where the Lab is at the end of 2019. Also, our wiki on economically inclined SF work can always use a little extra love.