The long road to digital anthropology

The Liiv Center and UNESCO have published a new report on digital anthropology, Innovation for understanding humanity. In it, both Edgeryders and me personally are described as example of institutions and researchers working to break new ground in “digital anthropology”. 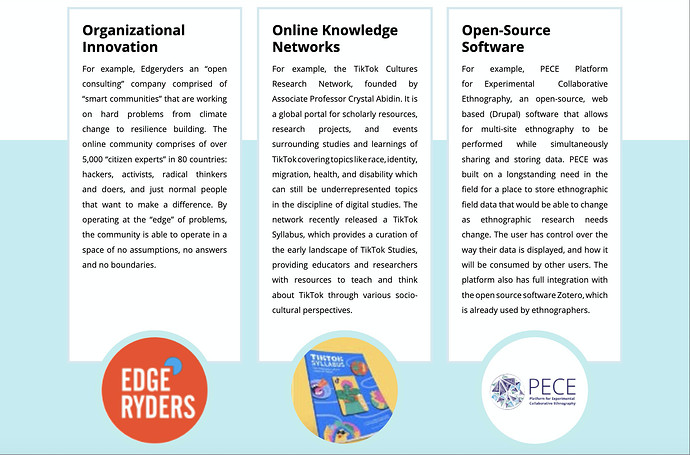 This is an emerging field: I understand it loosely as the space where anthropological research collides with advances in quantitative methods brought about by cheap computing and the increased availability of all sorts of data. People are still wrapping their heads around it, and it is tempting to project all sorts of personal quests and dreams onto it. I, for one, long for a social science that ventures into the messiness of social phenomena with rigour, humility, courage, and the determination to leave the world a little better than we found it, or at least to do no harm. This longing is so strong that I contributed to inventing a fictional social science called Aethnography (all hail @yudhanjaya for inventing the name).

Despite this, digital anthropology seems to be coming of age: this is great, because I believe we need it in order to do cutting edge social science research. I am an economist by training, and did my studies in a context of dominance of neoclassical econ. I received zero formal training in field research: economics was a mix of (utilitarian) philiosophy, math (mostly calculus) and statistics. In this context, “evidence” was statistical data.

Neoclassical theory provided the framework to interpret the data. Data, however, were never allowed to falisfy the theory. Steve Keen has written a vitriolic critique of this state of affairs. Of course many economists provided some alternative viewpoints. For example, I was trained by people who were Cambridge-trained, and were exposed to Sraffa, Robinson etc. Plus, some sub-disciplines, like development econimcs, simply could not assume “perfect information, perfect competition” – it would have been too unplausible. So I read Hirschman, and became fascinated with the “organized messiness” of the real world. But, for most people, neoclassical econ was the only game in town, and the only way to a career in academia.

In 2008 I was hanging out with a group based in Italy, and led by a Santa Fe Institute veteran, David Lane. In the SFI tradition, he was boldly interdisciplinary, so he invited Michael Agar to give a seminar. It blew me away. Agar was a methodologist of ethnography, author of “The Professional Stranger”.

I became fascinated with the epistemological agility of ethnographers. Here were researchers who treated everything as “evidence”, from casual conversations at a party to clinical data or patterns in art, and could integrate different types of data into a coherent whole. This enabled them to walk into the field knowing very little, often with little more than a research question. They were happy to discard even the question if they discovered something that pointed to a more fruitful frame. This made sense to me, because I believe that the social world is fundamentally messy. Only rarely can you state a clean hypothesis and proceed to falsify it by good quality data. Normally you proceed more as an explorer, drawing sketchy maps as you walk the land.

In the same period, social media were coming to the fore. They clearly were, in some sense, “real voices frm the field”. They felt authentic. David, I and others, inspired by Agar, started wondering if they could not be used as data for ethnographic inquiry. At the time, I worked for the Italian government. I was the instigator (in 2008!) and first director of a project called Kublai (Italian), an online community launched by the Ministry of economic development. The idea was to engage young people in lagging areas in conversation, and learn what stood in the way of starting companies, or NGOs, and contributing firsthand to societal and economic development and tailor policies to remove those obstacles. I wrote about that experience in this paper.

The Sante Fe liaison gave us access to the nascent science of networks; and I, as project director, had admin access to the Kublai data. My first foray into social media-as-ethno-data was simply network analysis. That was so interesting that I did my entire PhD (still called “Economics”) on network science (see). But that was still not enough: to get to the meat, we needed to engage with qualitative data.

And so, with my Edgeryders colleagues and others – including networks scientists like Guy @melancon and anthropologists like @akmunk and @amelia, we developed a method to use social network patterns to help validate qual data: https://journals.sagepub.com/doi/full/10.1177/1525822X20908236. This quest feels important, because it dovetails with an impending crisis of trust in science, especially the social sciences. Anne Beaulieu has written about this. My own take is here: https://doi.org/10.5281/zenodo.5807215.

To gain trust, researchers need to show how they know what they know, and this needs to be understandable to users of research. Ethnographers have an advantage here, because their very epistemic agility means they are aware of their own biases (“positionality”), and they have developed methods to account for it. This makes for wholesome epistemology: as a researcher, you should abandon claims to objectivity, and instead focus on making your reader understand how you went from data to conclusion. And this is The Work now.