"The Ministry for the Future" is an important book, anyone up for a discussion on it in a few weeks?

Just a heads up: I am currently reading Kim Stanley Robinson’s The Ministry for the Future. I am far from finished, but I think it might be an important contribution. In a sense, the book that I have been waiting for.

Would people be up for a book club kind of discussion at some point? Ping especially @yudhanjaya and @Joriam, but really everyone in this group. We will then add the book to the wiki. 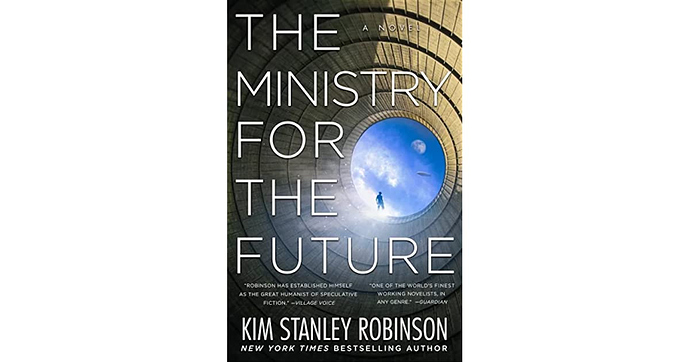 Maaaan, I already bought it and it’s the next one on my list

gotta say I’ve been reading quite slowly these days, so I guess I’ll need a bit more than a few weeks, but I’ll get there — and happy to discuss it afterwards!

It was already next in line for me, so count me in!

Not sure how fast I’ll finish it, but I’d be happy to participate anyway…

First post to say: count me in! Are you thinking to discuss the whole book at once, or in parts?

Hello and welcome, @argotechnica! I was thinking all of it, but I am only about a third in, and may have overlooked important things. Do you have any ideas as to how to do it?

@Joriam, @Alessandro: well received! Looking forward to it, the book is really exciting. Though disturbing, and uplifting too, in the way that I imagine having a serious go at climate change.

Meanwhile, I found a very grim review by Cory Doctorow. But really, read the book.

Did you see the Crooked Timber seminar on the book?

I did, in the sense that I know it exists. I will read it when I have finished the book itself.

I am now at the final stretch of the book – 85% in. It’s not really a novel, more like a fictionalized social science book. It is an attempt to sketch a credible path from here to a future where climate change has been tamed, without introducing Deus ex machinas (miraculous technologies, divine/alien intervention, suddenly everyone starts to care, and so on). What needs to happen? Quite a lot, it turns out.

I am eager to write more, but I want to finish reading it first. Would like to recommend it to the economists and social scientists in the room – @petussing, @kevin_carson, @lidiazuin, for example – but also to business minded people (@richdecibels, @lasindias) and, of all people, to @matthias.

I have looked at Doctorow’s review of KSR’s book. He writes ““It is easier to imagine the end of the world than the end of capitalism,” variously attributed to Frederic Jameson and Slavoj Žižek.” I find this perspective problematic. I accept capitalism, not because it is the best system, but because it is so deeply embedded in humans that to root it out has so far required that we effectively lobotomize humanity. This is especially a shame because the project of ending capitalism has somehow so occupied the minds of so many creative and forward-thinking people for the last century and a half that we cannot somehow get those people to think, creatively, but realistically, of how to actually solve the actual problems of humanity in ways that do not make things much much worse – in reality, not in the imagination.

And so, by accepting people, as they are, I get told effectively, and often nicely, that I am backward-looking, in favor of an evil ideology, etc. If so, then what I sincerely believe such people are saying, in effect, is that they find human beings so irredeemably evil that they cannot bear to consider ways to envision a path forward for human beings - and so they must fantasize some other species to replace us. I am Jewish on my mother’s side – I am VERY aware of the right wing’s use of the term “replace us” – I am using it deliberately in order to point out that even the reprehensibles will stay. They are part of us. We are they. I think that only if we can find a human situation in which even the conservatives, even the reprehensibles can find a place to live, we will not have accomplished our goal of creating a society better than our own, with a place for the humans who live in our world.

This does not at all mean that we should not modify the structure of current capitalism. There is a perspective among some in the United States and Austria and other places that the best approach is unrestrained capitalism – this is an ideology, and as such is not helpful. Ideology generally is a way to try to force humans to fit into the boxes into which humans do not fit well – none of us fits easily into any box. Modifications to existing structures would do well to take this into account. “Nudge economics” or Behavioral Economics is a good beginning to explore ways to remedy this.

This book is on my reading list, but I’ve been watching some of Robinson’s talks in the meantime. Would love to hear people talking about this and if I’m not mistaken some have started a discussion about this book at Envisioning’s Slack channel.

I also read two books that might be of your interest: Multispecies cities is a Solarpunk short stories anthology with some views about a post-climate change world and some stories do investigate technological roundabouts, others are more fantasy-inspired, but still great. The second book is Invisible Cities, an anthology of Chinese sci-fi short stories. Still reading it actually, but already loving their views. Both books are mostly focused on the Asia-Pacific region, so they might be very illuminating for those (like me) who are not so familiar with what’s happening there and want to give a try to more optimistic sci-fi but nonetheless very critical and mature.

I am currently most of the way through the book and would love to join a book club about it. Doctorow’s twitter thread about it is very useful for references around the various ‘solutions’ proposed by KSR https://twitter.com/doctorow/status/1392502304167784448 would be very interested in a conversation around those as well

would be very interested in a conversation around those as well

Agree. That thread (link on Doctorow’s blog) points to the Crooked Timber seminar on the book, mentioned by @danohu above. For the book club thing, we will encourage people to look at that.

We also need some sort of cheatsheet, because Ministry is quite a big beast, and not everyone can afford the reading time.