I have a hunch there is something to be learned by looking closely at what patterns form as we go. I do not have hypotheses to test (yet?), but I like to look closely at raw data. Today I made a plot of the number of posts per week of the two projects. The non-public workspace discussions are not included. It looks like this: 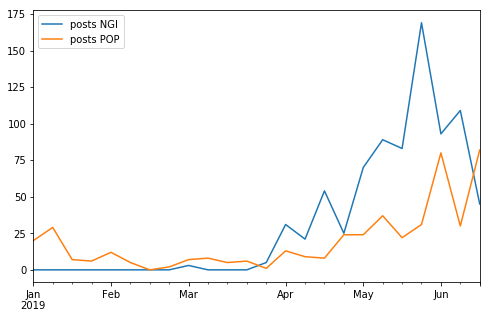 Some interesting POPREBEL conversations had already started in 2018 – I assigned those to week 1. So POPREBEL had a head start. An official POPREBEL platform space was rolled out in March, when NGI was still dormant; at the beginning of April NGI also kicked in, and grew a bit faster than POPREBEL until the past few weeks. At the time of writing, we have:

Notice how the number of posts per topic is lower in POPREBEL (5.0) than in NGI Forward (9.8). POPREBEL also has many more topics with only one post, and no replies – maybe something for @noemi and @natalia_skoczylas to look into?

The pairwise interactions row refers to the number edges in the respective social networks. Both graphs are similarly dense, with average degree = ~3.

The new version of the networks looks like this: 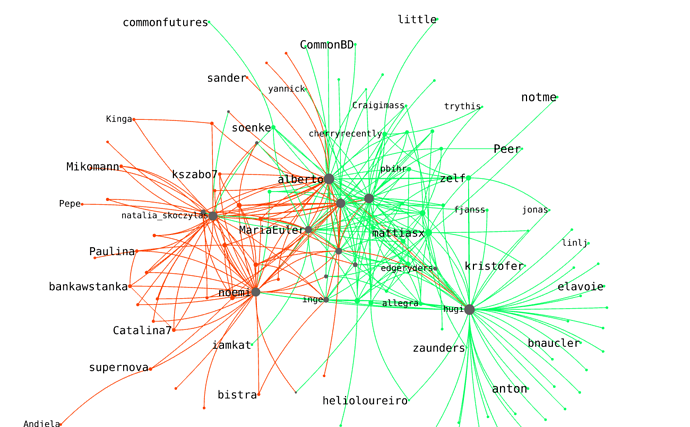 Red edges represent POPREBEL-related interactions; green edges NGI FORWARD-related ones. Gray nodes represent people who are involved in both discussions. They are 16 in all. The graphs show me two things:

A lot of the network is still kept together by community managers and engagement folks. Here is what happens if I drop just 8 users, that is ('nadia', 'noemi', 'alberto', 'hugi', 'johncoate', 'natalia_skoczylas', 'MariaEuler', 'mattiasx'): 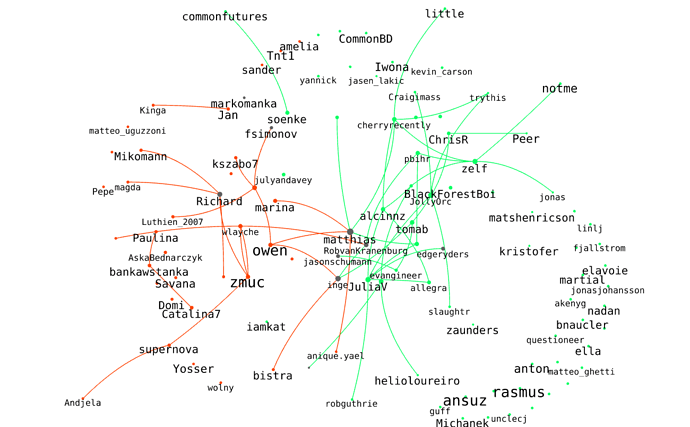 Only 109 out of the original 402 edges remain. Still, what remains is still a small world network, made up of about 65 users that are either free-floating or part of small components with only two nodes; and of 46 users that are connected in a giant component. This is encouraging for the future developments of the conversation.

POPREBEL also has many more topics with only one post, and no replies – maybe something for @noemi and @natalia_skoczylas to look into?

Very much aware of this - I believe it’s a function of a slightly different approach to community building: we are mostly relying on making visible the rewards for contributors as a first incentive to participate - a call for financially compensated stories and call for local connector. Cultural differences, a different target population and stepping into a new language territory: discussion about basic needs and system failure in the lived lives, more than at the meta level; more down to earth experiences shared rather than projects to fix them; normal citizens rather than energetic doers. All of this might delay the interactions betweeen participants themselves. It is a different learning curve, and it will be interesting to see how it unfolds.
On our end, we will be relying on local connectors and local events a lot to compensate for the barriers.

It is a different learning curve, and it will be interesting to see how it unfolds.

Great explanation, thanks. Indeed, it is great to be experimenting with different approaches.