I met Sabine in May 2018 at a conference on feminism. She easily convinced me to join Webrussels, a movement to empower citizens to build the city they want. A few months later we ended up organizing "Fearless Cities" a 2 day festival on local democracy. During the festival, she said something that remained stuck in my mind for quite a while

Hearing the story of Sabine. 20 years in Brussels and still has a feeling of not belonging here. We need to include diversity in public decisions #fearlessbrussels @fearlessbxl pic.twitter.com/jQ4KjEpAKt

Today she shares the same opinion, "It is very easy to live in Brussels for a while and have no clue of local, regional or national politics. Expats can live here in a world of their own and not connect with anything. When you come here as a foreigner you are so preoccupied with your career (and maybe with your family life), that there is no energy left to engage in citymaking . But I think that, for long term happiness, it is essential to feel that connection: to feel part of society in the city.

Much later, in October 2019 I met her and her partner Malcolm at a bar in Etterbeek and we had a nice discussion on housing, sharing and communal living in the city. 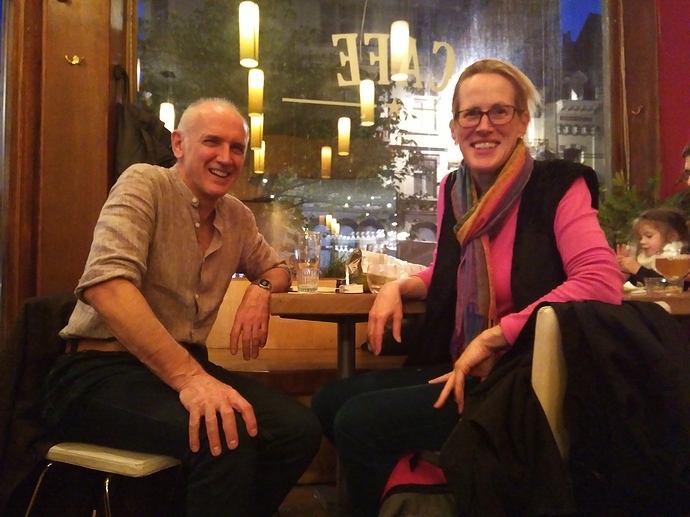 IMG_20191018_1926374096×3072 3.6 MB
Malcom and Sabine own a house in Ixelles and live with their 2 children.
Sabine is german and works for an international NGO dealing with climate change issues. Malcolm is from UK and teaches math and physics at the European School.

Experience at the university of Durham

Malcolm: I remember our experience at Durham University where I met Sabine at a residential college of academics, I liked the aspect that one had privacy and personal space but one could come together for meals, sports facilities, common rooms to enjoy each other’s company and then withdraw again. We used the space to initiate social gatherings and also to facilitate professional academic interactions.

Connecting with the city

Sabine: I think this Reef project could help for connection. Especially in situations like Brussels where a lot of people come here from abroad and do not have family networks. The Reef could be something to replace that.

Eating and music bring people together

Malcolm: Common themes in my life that bring people together are eating, drinking and music. Music has been pretty much a glue that allowed me to join and unite thriving communities.

Malcolm: A garden, a greenhouse, a pool room, a swimming pool. We would also like to have a clothes drying space. We used to have a roof where we could put the clothes to dry outside. it was covered when it was raining and used to dry very fast when sunny. it was energy efficient. Now we have a tumble dryer. I hate this as an energy efficient person unless the reclaimed heat would be collected and used in other places. We are very lucky we have a music room, a study, a workshop for makers, but we don’t have a garden.

Some sort of agreement that goes beyond pure logistic arrangements

Sabine: I was never in a situation where I could choose a community to live together. I had different shared flat experiences during my university days. Those ecosystems were rarely designed but in my case it was more by commercial coincidence (they were looking for someone to join their apartment). If you were lucky you could end up in a context where people liked each other and we ended up doing things together.

During those University days it used to work better when there was some explicit conversation on how one wanted to live together. What one wanted to share and what rules one wanted to adhere to: how and what to clean, who would shop and who would take the rubbish down. Without those basic agreements of communal living, conflicts would arise and not a solid basis to deal with those conflicts.

What I would look for today is something that goes beyond the domestic arrangements, where there is the possibility for social engagement, common social life, common activities and maybe common cause around something: A contract to get involved as citizens in our neighbourhood.

I don’t want social control, I want a communal way of living. And what I want from that is a place of discussion about life in the city. And how the people that live in the community want to implicate themselves in the building of the city. Also join together and decide on some form of action, to be political beings to be citizens together.

Housing communities they have to be self selecting

Sabine: They have to like each other and make an agreement on how to live with each other. But we should be careful not to be elitist projects becoming a same socio-economic group of similar wealth. I don’t know how to solve all of the issues but there should be some social inclusion and material solidarity in a community housing project.

On how expensive is to build environmentally friendly houses

Malcolm: We have a typical Belgium house. Narrow and tall. Spaces are distributed across floors. Very inefficient. We wanted to do radical environmental “things” to expand the rooms but we could not afford it. The project would be too large. It would be cheaper to destroy the house down and build a new one. I believe those saving could be done by normal people buying structures together.This makes it possible to have shared facilities that everyone can use. Making a high standard of living available to ordinary people. Environmental technologies should be not just for rich people.

On the burden of social life organisation

Malcolm: There are economic attractions to live together: saving money or reducing impact on the environment. But the actual administration of communal living takes time: minutes, meetings.etc As a young guy I would be happy to throw my assets in there without thinking too much. But with my age, I have to be careful on dispersing capital to a project like the Reef because the risk of losing it all is big. The trust that has to be defined is Trust with capital T.
Sabine: Time spent on living is reduced with my job. I love my job very much. I work a lot. I am aware that goes beyond the legal working hours. And sometimes I miss some communal living: more political decision making together with others (political design). But this requires time. Maybe living in a space like this would be an easier more efficient way to access that communal living that I miss.

Is this topic is interesting?

Would you like to discuss it in a real physical event in Brussels in November 2019? Here are 2 upcoming events (Facebook links).
14 Nov

Guter Zweck event by Edgeryders and ALLEE DU KAAI on Donnerstag, November 14 201915 posts in the discussion.

What a great interview, I love that you made it into a duo!
I met Sabine and Malcolm last week at our first Reef workshop, and I thought their maturity and wisdom was exactly what the group needed. I especially remember Sabine mentioning that she aspires to be in a more politically engaged community.

A contract to get involved as citizens in our neighbourhood.

I don’t want social control, I want a communal way of living. And what I want from that is a place of discussion about life in the city.

There is a fine line here, if you ask me, because the mix of people self selecting to share a house will be both 1) social animals and 2) political animals. I think we need both because too much of 1 makes for less learning and too much of 2) makes for a civic collective/ organisation/ even a sect. I guess it is a matter of a healthy mix, and that is so important. Especially for 2) more activist people, their/our job is already to make a change, which means that coming home after work should allow for rewinding and not more work. I dont know… Does this make sense to others…?

Is this a good moment to ask (again :-)) @rmdes to share his co-living story? Or a few things to keep in mind on the side of making change collectively?

If you guys want a story about how NOT to co-live and work, then my story and alongside the story of more than 60 kids is something you could be interested to document

If you guys want a story about how NOT to co-live and work,

I’m reading previous post and realized this would be a writing process here in the forum… But this is exactly the hardest thing to do for me : writing about it. It’s hard for me enter into the writing process, even for myself (I’m attempting to write a book about this since 2 years) but I find myself in front of a blank page syndrome… I’d rather have a dialog with someone, or interview.
It’s just easier to speak about it for me…

Yes, I was actually wanting to offer an interview.

Are you free on the 12th November afternoon/evening or 13th November morning/noon?
So looking forward to this,

I’m based in St Gilles but work in Yser, I guess the easier would be to do it at my place ?

Super, we’re close then! DM me your address?