@marc, I am thinking about something called the unMonastery Sustainability Plan (coming soon, I am building it here – feel free to request access) and I was thinking: is there any way we could actually deploy solar, maybe your solar tracker itself, to produce energy for unMonasterians to use in the building? The whole point here is to reduce dependencies to improve sustainability.

From cursory research, it seems that solar (photovoltaic) outputs 12-24V DC, which should be good for most electronics after voltage transformation. What about thermal? Energy storage? Would it run on solar by day and on the power grid at night?

We need rough figures for:

This does not need to be thoroughly research, a guesstimate will be more than enough.

@ben, @ilariadauria, work with me on this one.

This is really interesting and maybe this could be the main goal to achieve during this 4 months project.

Like you said the first thing to do is to estimate how much electricity we estimate we’ll use. Then it will give you how many solar panels we need (it also depends on the size of each panel which will determine the power of the motors).

The prototype I’ve brought is for demonstration purpose only it can’t be really used in a production environment (solar panel is too small motors are probably two weak for larger panels). That’s why I think having this project with students (I mean building a solar tracker from zero) is a good idea beacause we could dimension it so that it matches unMonastery requirements.

Unfortunately I don’t have any experience in thermal panels.

For power storage we’ll need a lot of battery so it might not be a good idea. I think a good starting point is : “if there is sun just take the produced electricity, if not take it from the grid”.

Numbers on the fly

[Marc], you are a hell of a guy! You always give intelligent answers in record time. I am loking forward to meet you in person.

Ok, but look: could you just put together a couple of rough numbers? Example: the electricity bill in my home (4 people) will be about 100 euro a month. In the unMonastery, with 10 people, it might be about 250, that’s 25.500 a year. Suppose solar saved us 25% of that, it would be about 6.100. I just need the order of magnitude to be right for now, then you can work on the problem in the coming months.

Could you do just a quick search on thermal? Or would someone else be able to scribble a rough number that makes sense?

The first thing is I think we should reflect in terms of kWh consumed / produced rather in terms of money (because the price of electricity depends on the country you live in).

I found this interesting document evaluating the consumption of a 4 persons family during the year (it’s in french so feel free asking me if there is something you don’t understand).

It turns out that a four family person consumes 6800 kWh in one year. So for ten people it would be about 17000 kWh per year.

If you want to produce 25% of electricity using solar panels, you’ll have to make 4250 kWh per year. Then to know the quantity of solar panels to install it will depend on :

So for Matera with a 2.4 kW installation (eight 300W solar panels) you would produce 4690 kWh per year using solar trackers. To estimate the PV production you can use this site.

Of course this is an average value for a year. During the the winter it will be significantly less so you’ll have to adjust according to the season.

So to evaluate the costs of such an installation you’ll have to consider other things :

I don’t know if this englightens your questions…

I think this is worth creating a wiki about all these reflections.

Not sure if it is helpful in this context but…

Less Than $1 A Watt Diy Make Your Own Solar Panel 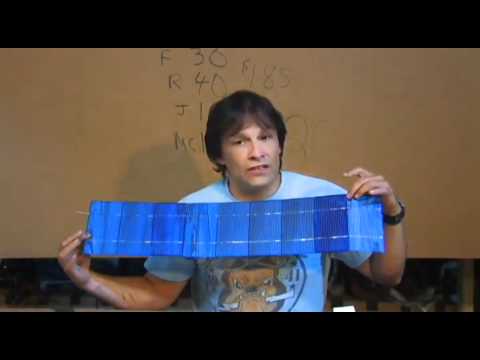 Yes this is interesting (DIY is always interesting :-)) even if from that what I understand a fully pre-manufactured solar panel doesn’t cost much more.