What does it mean to make a human-centric Internet, and who is doing it?

Earlier this week, we had a long meeting in which many important things were said. One thing from @mirkopresser stayed with me: something like

the Commission feels a mismatch between who they are talking and the pioneers of this new human-centric Internet.

As I considered this, I realized that it is not at all clear (not to me, at least) what “a human-centric Internet” actually is. @RobvanKranenburg (at the London meeting) and @katjab (in this article) have spelled out the NGI Forward vision as well as I know how:

But things don’t have to be this way. Between Silicon Valley’s corporate-led internet and the Chinese model, where the government is in charge, can we come up with a third narrative, where citizens and communities are in control and can determine their own future?

In other words, for now all we have a is a big question mark. This opens a lot of room for “mismatches” like the one described by Mirko. Who is it the Commission have in mind? Who could be a good metaphor for a human-centric Internet builder? A Creative Commons lawyer? A Siemens R&D employee? A startupper drawing exponential curves in a PowerPoint file?

As I mused about these things I chanced into a discussion on Scuttlebutt, (like @hugi and @matthias, I try to keep some tendrils in the indieweb, probably not as seriously as they do). To see the whole thing, if you use Scuttlebutt, use message ID %u0fnmwUQTBcL9S8HP3uYCdBgnssu4GIyWSuo5XLYvPs=.sha256, but the title says it all: “Deprioritizing first world problems”. The back story is this: an often-repeated feature request of Scuttlebutt is to provide for a multi-device account. The author of the original post has this to offer:

Multi-device management is by definition a problem experienced by people who own multiple devices , and those are probably by definition not the underconnected world […].

It turns out that if you pick first world techies as your target audience, you’ll be dealing with people who perceive tiny inconveniences to be major showstoppers. Moreover, if you keep on catering to them, you’ll be empowering privileged people more than the underprivileged (one example is that if you build apps to be online-only, you are privileging the privileged with good internet connectivity and ignoring the underprivileged, widening the inequality gap further). Meanwhile, underprivileged people are less demanding and more welcoming to almost any progress. In other words, it takes 100h of work to make a privileged audience satisfied, while it takes 10h to make an underprivileged audience satisfied, because of low-hanging fruits and less demanding attitude from users. And the underprivileged are often excluded from target audiences because they aren’t economically viable customers. But that’s when you’re running a business, and with Manyverse I’m not. It takes a tech giant or a VC-funded startup to build polished apps for first world techies, while it takes just a reasonable amount of free time from open sourcerers to build decent proof-of-concept software for less demanding audiences.

This gave me a bit of an “aha” moment. The builders of Scuttlebutt started from the sort of human community they wanted to build: open to the underprivileged, solving basic social connectivity problems while staying away from surveillance capitalism, etc., and on those basis they are making all their technical choices, right down to the editor. As they do that, they discover and exploit sources of economic efficiency (“underprivileged audiences are less demanding, easier to serve with open source tech”). They ended up with a very different product from the ones they are seeking to replace, and with a very different community. Diaspora still feels Facebook-ish: Scuttlebutt feels completely different, to me at least. See the video below if you want a quick intro.

So. Human-centric, check. Technical innovation, check. Social innovation, check. Are communities like these those we are supposed to engage in NGI Forward? If so, I am afraid the narrative will have to change in depth to make space for that much diversity in the conversation… Those guys might engage, but they will come asking some deep, probably unsettling questions. “If the purpose is serving humans, it is not a given that we should be even giving business a say. By your own definition, business is only relevant if it serves humans”, and so on.

5 Likes
Event Outreach Campaign Content
Humanity has two existential threats: our disregard for the environment and our disregard for eath other
Hackathon for Ethical Solutions to Unethical Problems - Berlin
hugi March 6, 2019, 2:31pm #2

Absolutely, I think you’re spot on. Communities using and building things like Scuttlebutt (also known as SSB), DAT, IPFS, Beaker and Mastodon are a great starting point for exactly these reasons. These are the first groups I want to engage with. We have a huge reservoir of themes to draw upon that these communities are already discussing: resilience, environment, alternative energy, wellbeing, social issues, decentralized institutions for solidarity and many more. Through our good friends at Enspiral, we have direct access to the heart of the Scuttlebutt community as the main developer Dominic Tarr is from New Zealand, so it’s a good place to start.

Someone made this map of how the user-base and culture of various social online technologies map on to the political compass. I don’t know who the author is, and it is obviously to be taken with a pinch of salt, but there is some truth to it. It corresponds broadly to my own experience with these communities. 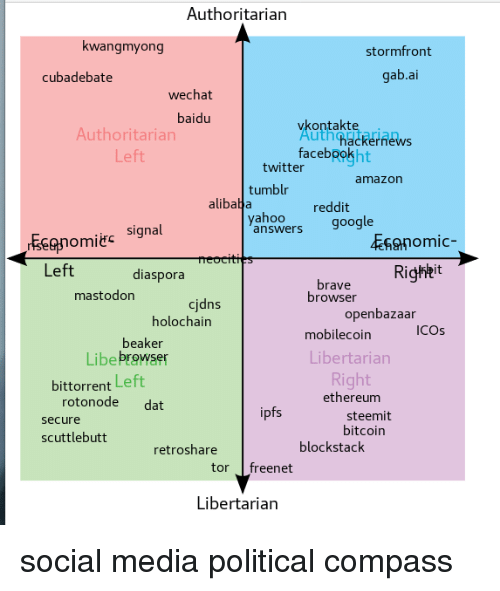 Engaging the communities on the two libertarian quadrants to engage in the NGI conversation is crucial. To do so, we will need to give them incentives. Access to funding through calls, and some guidance for how to apply, is one incentive. Creating high-profile invite-only events that cater to their tastes is another. That said, there are smoother ways that invite-only to get to the right people, which is essentially to make the communication specific enough in flavour that only the right people understand why they should go. One event using this strategy is Data Terra Nemo, which I will be attending in May.

As a side-note, Scuttlebutt developer Dominic Tarr has quite the story to tell. He is an extremely productive author of open source libraries, and has written hundreds of modules that are being used all around the internet. He has never been paid a dime for this work, and gives the code away. Obviously, he can’t maintain all this code, so when people come along to take over maintaining old modules he is has written ages ago, he is happy to hand over the reins. This created controversy as it was discovered that control over one of those modules had ended up in the hands of a thug who inserted malicious code into an update, which was then pushed out to thousands of servers all around the internet. Its intended target was a single Bitcoin wallet platform called Copay which was using the module, and the perpetrator could then harvest account details of any account with more than 100 Bitcoin. Dominic caught a lot of flack for not doing due diligence on who he hands over code to, but his response was that as long as companies are not paying maintainers of the modules they use or maintaining the modules themselves, they had themselves to blame.

You are right, this is quite the story! Its morals are clear: if you go with the present economic model for the Internet, “human-centric” will remain an aspiration, rather than a description. The Internet’s economy post-1993 pulls in the opposite direction.

One event using this strategy is Data Terra Nemo

To do so, we will need to give them incentives.

guys can we make this thread public?

This thread is now public.