What we'll do together in 2014, and why we think it will work

I hope this post finds you well and looking forward to a 2014 of peace, love and shared prosperity. This period of relative calm seems like a good time for reflection, so I wanted to touch base and share some thoughts.

To my sisters and brothers in South Africa I wish to extend my condolences for the loss of your beloved Madiba. The world was lucky we got to keep and learn from him for as long as we did. We are going to need to remember those lessons as we move into a year of rising intolerance, populism and discontent all over the planet.

While Mr. Mandela’s passing may mark the end of one generation’s struggle for liberation, all is not well. The new generation of activists is faced with different struggles: societies failure to come up with credible responses to systemic crises and the growing empathy gap in a time of growing economic inequality and social distance. The good news is that there are a lot of creative responses happening at the edges. Network bartering algorithms to ease consequences of liquidity constraints on local economies. New kinds of infrastructures for plugging gaps in innovation support systems. Re-engineering water supply and food systems to bolster food security. New p2p funded encrypted services and digital infrastructure to safeguard user privacy. And these are just a few examples from the Edgeryders community. I come across incredible initiatives everyday, built by people acting far outside structured R&D processes of corporations and university laboratories.

The bad news is that these efforts to innovate our way out of social-ecological, economic and political crises are increasingly coming under threat. To anyone who has tried to gain acceptance for a novel idea or approach, the fact that people are biased against creative ideas comes as no surprise. While some social rejection can foster resilience, it seems our societies are becoming less tolerant of our young innovators like Pirate Bay spokesperson and Flattr co-founder Peter Sunde and the now deceased Aaron Swartz, founder of Reddit. Intolerance and authoritarian extremism are on the rise, on the streets but also in the corridors of power. Examples include excessive surveillance and governments attempts to curtail protest rights or push through international trade agreements like ACTA and TTIP without democratic debate.

Whats going on, have policymakers and legislators suddenly turned evil? I don’t think so.

It is clear the current generation of leadership in business and politics is not equipped to navigate the new techno-social realities within which they operate, no matter how well-meaning they are. A recently published report called World in Transition: A Social Contract for Sustainability highlights the importance of “fringe change agents” in shifting paradigms (The report was produced by a think tank that advises the German Federal Government). They’re still future-shocked by globalisation and the unprecedented degree of connectivity. They need our support.

So how can we help them adapt? One way is to build bridges between the centre and the edges where radical innovation is happening. This is not a hopeless battle, it is what we do everyday. Edgeryders is fostering the diffusion of new ideas, perspectives and behaviours from innovators at the edges to decision makers at the centre. On top of Edgeryders’ many achievements listed below, my nomination for candidacy to the Swedish Parliament in 2014 is one of the many signs we are making progress. 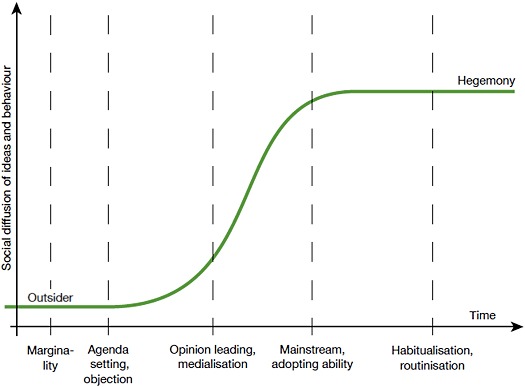 Phases of social diffusion of ideas and behaviours, and the roles of change agents in the transformation process. Source: German Advisory Council on Climate Change (WGBU)

Along those lines I would like to suggest we do something ahead of April 27 when South Africa reflects on its past 20 years of Freedom and Democracy. Let’s take this opportunity to rally behind our young in their future building exercise, without judgement or demanding that their dreams of future be an extrapolation of the status quo. Edgeryders is getting behind Lindy and others’ efforts in building infrastructures to support change in South Africa and beyond. Since my visit to Johannesburg:

There is still a lot to do, but with your support we’ll all get there faster and better. You can contribute to this work as a community member, mentor, partner or founding client. We founded the Edgeryders organisation in May, what have we achieved since ?

See you in 2014 and may it bring us all more love, net peace and shared prosperity.

Nice and optimistic. It also makes sense! Let’s do it.

Last days of the year can be used to do a little bit of clean up in your life, thinking about the dos and the dont’s for the year to come. Edgeryders is something I want to keep in my life, give my time to and use my mind for. Thanks for making this happen.