When mass protests can barely begin to solve it

Whether here or not, you probably have seen the recent street outbursts following the tragedy of over 30 45 people dead and a hundred awfully injured in the fire of club Colectiv in Bucharest. There are no words to describe the kind of emotional response and solidarity shown these days by everyone. No matter the many versions of who bears the responsibility for losing such talent and youth, the place, like many of our generation’s underground cultural spaces, was really ill equipped to deal with any incidents and had been nonetheless approved for business (only one exit, no fire extinguishers, and highly flammable materials covering walls). After shock and excruciating pain, we’re in an awakening of sorts, since this was a tipping point after a previous accident where politics contributed to loss of human lives. For the last days we’ve been gathering, marching and demanding resignation of public officials and change of government, political class, system change, #changeeverything basically.

Our PM resigned yesterday, as well as the mayor of the sector (Bucharest districts are called “sectors”) where the club was based. Clubs and cultural venues everywhere are closing for fear, or being shut down as we speak. We’ve moved from a sense of collective guilt in the first days to cashing in on years of crappy politics. 70K people yesterday on the streets they say, craziest mobilisation in decades. 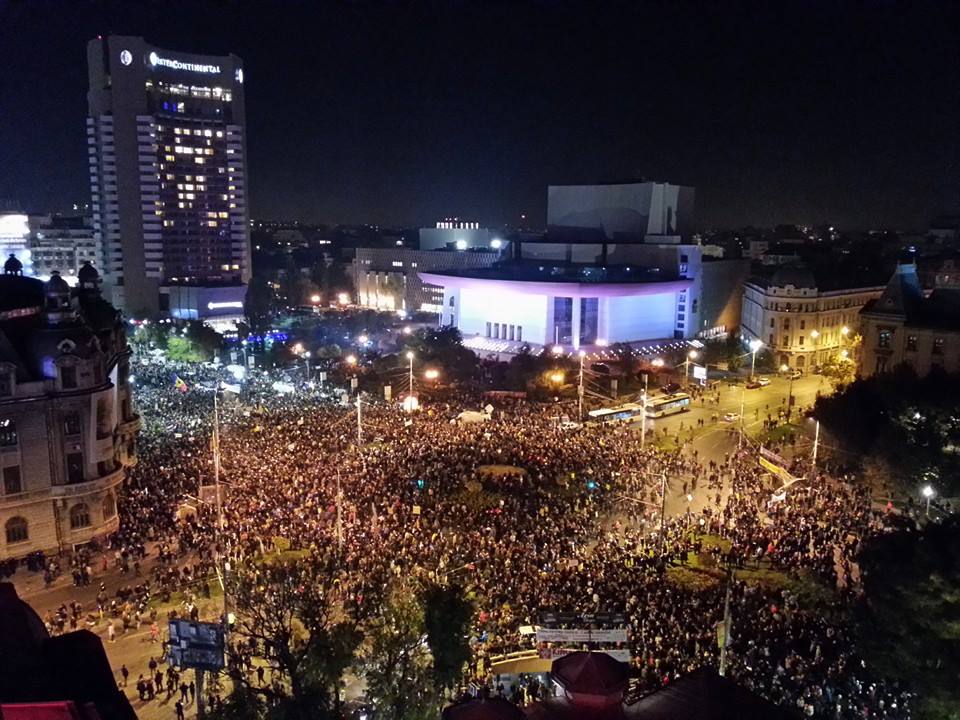 But what does the future hold and can we do something about it? Well, I don’t know about others, but I for one try to…

…navigate the noise. The streets are full of infiltrated agitators, competing political groups (even new ones or youth wings of current ones) trying to push their own agenda to cover the vacuum, and of course stupid radicalism spicing things up.

…keep an eye on where alternatives can come from. Some civil society groups have sent in list of demands (technocratic government, leftist policies etc) while others are more laid back or radical. The street movement is said to be leaderless and powered by the facebook generation, asking at a minimum to stop corruption and strip politicians of their privileges. There is a discussion group called Changing Romania - list of nominations with real time name dropping of who are those who should run the country (9000 members in less than 48hrs). Reading its live feed is somewhat painful, as you can see people trying to self-organise massively with no plan or rules whatsoever, and most of those proposed have no political competences, for good or bad.

Some elite groups that I know of are sitting on the sidelines, non-committal in so far as building a new political movement is concerned. They seem to know that whoever speaks first is discredited along the lines of “only he who is not interested in governing should govern”. Maybe there’s not enough will, capacity, and too much realism about all that can go wrong.

Then there is you, me and everyone else who is not too young or naive to eat crap, not too old or cynical to stay home, but clearly part of a generation who cares enough to be willing to go the extra mile and back a political alternative if needed. My friend Zoli says it well “If people who protest do not get involved in politics, in 2 years we will protest again against the Government and the PM, which will be formed of current Opposition. The establishment needs to be changed, not the government.”

…have patience. From where I’m standing, there is a pretty sophisticated understanding of the opportunities and odds among the crowds, but navigating this level of complexity takes time. Individually, we win when voting with our feet. Collectively, we can fail or we can be part of an incremental change.

3 Likes
The Cytostatics Network seen through the eyes of a member
Rethinking Leadership
alberto July 31, 2017, 6:38pm #2

This is really touching, No. Angry and wise. With your permission, I am promoting it to Edgeryders’s main blog. Hang in there.

eDemocracy platforms up and running

Doers at work: already there’s a couple platforms set up by grassroots gaining traction where we can upvote proposals.

http://schimbaromania.com/guvern - for Gov and Parliament nominees and crowdsourced demands

https://cevremcolectiv.yrpri.org/ - for crowdsourced demands; modeled on the Icelandic platform Your Priorities

It is always good to see people finding their voices. But I wonder how many people on the streets have never paid a bribe? I hope the protesters examine their own consciences alongside demanding change without.

Welcome back, @George. It’s always nice to read you on Edgeryders.

I think of anti-corruption movements in terms of evolutionary game theory (Wikipedia). If corruption is widely spread, chances are it is an evolutionarily stable strategy. This is a particular mix of behaviours such that any deviation from the norm punishes the deviant. To make an extreme (and stupid) example, imagine an evolutionary prisoner’s dilemma. You have a population consisting of individuals who all play prisoner’s dilemma with other individuals around them. All individuals playing one of two variants of the famous tit-for-tat strategy:

The evolutionary stable strategy of this game depends on two parameters: how attractive is defecting when the other player is cooperating and, critically, how many individuals use Variant 1 vs. Variant 2. If everyone starts by defecting, the system gets locked in, and everyone keeps defecting forever. This situation is an evolutionarily stable strategy: it is “uninvadable”. If one lonely individual decides to switch to cooperating, she will be pay a high price because everyone she meets is a defector, so that there is no way she can benefit from a cooperative attitude.

However (for certain values of the “attractiveness of defecting” parameter), if you inject a sufficient number of cooperators in the population at the same time, the system will gravitate towards an evolutionarily stable strategy where most individuals cooperate most of the time. You can try it yourself: download NetLogo, call up this model (part of the standard NetLogo model library) and play with the parameters.

Now imagine that “defectors” are people that ask for (and pay) bribes, and “cooperators” are people who refuse to do so. The payoff of both corruption and integrity depends on the percentage of the population that is corrupt: the more people are corrupt, the stronger the evolutionary pressure to also become corrupt. These movements, I believe, can be seen as attempts to coordinate a critical mass of people into switching behaviour at the same time. If successful, such a switch can in principle be self-sustaining, because corruption becomes much more attractive if much fewer people are doing it. So, a person can very well have lived with corruption in a corrupt system, but be willing to forego corruption if enough people do the same.

Sorry, that was long and nerdy.

Ciao @Alberto, it’s great to be back. I, too, was touched by Noemi’s words. Thanks for sharing the above; long and nerdy is much appreciated. I am once again reminded that Edgeryders is a great space in which to learn. I fully subscribe to the idea that widespread disruptive action can change history. I hope the shared ambition and identity forged during the protests transforms into the critical mass of people switching behaviour at the same time that you reference. I also hope that those who chose to resist corruption when the ‘evolutionary pressure’ was against this behaviour inspire others during the long-term work for social change that starts once the streets have cleared.

Thanks for reading and for raising this @George. When I wrote that the crowd has a sophisticated understanding of change I meant just that - how different things converge in this moment and people seem to be aware of them. For me this sophistication is the greatest point of observation and pride. Of course, I’m looking more at change makers and opinion leaders not at shouters. I’m very keen on mentally mapping the key voices and channels that are message carriers of entire groups.

So it’s not your usual down-with-government, just pointing fingers protest. Because of the emotional trigger (tragedy), because this trigger works across generation (parents everywhere are hurting), because 25 yrs after communism a new generation is indeed coming of age and showing some maturity, and other probable reasons, this all converges into time for deep reflections and looking inwards. Below are two messages recurrent in the streets showcasing more than politics.

The only question remaining I think is how long in approaching critical mass? 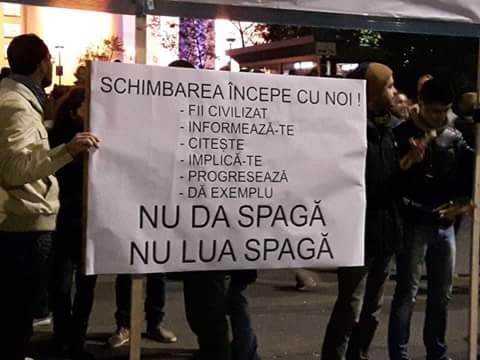 transl: "Change starts with ourselves! Be civilized. Be informed. Read. 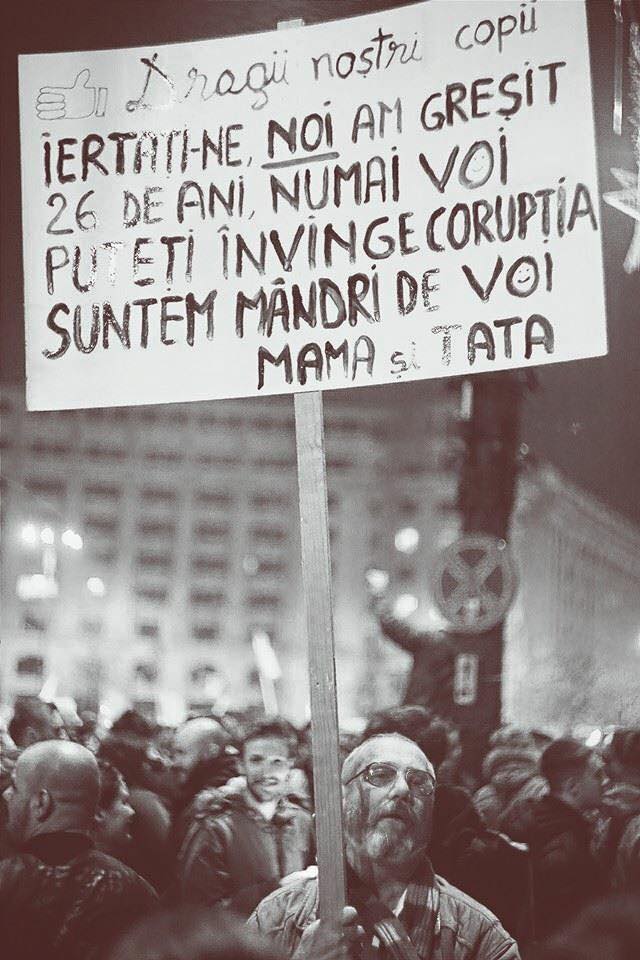 transl: "Our dear children, forgive us, we did wrong for 26 years.

Only you can beat corruption. We are proud of you

This is inspiring to read @Noemi, especially the last photo. Thanks for sharing!