When was the last time you really learned from failure? 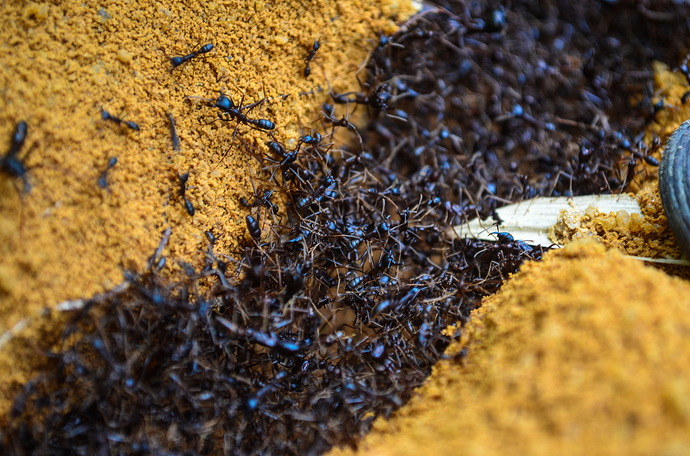 Under normal conditions, it would be humming along, growing, deploying soldiers to nurture its queen. But this particular anthill is under attack. Something is disrupting it – maybe a predator, or a stream fed by a recent rain. It has taken damage, but is far from dead.

In the center, close to the queen’s chambers, activity goes on as normal. You might not notice the threat at all. Out in the war zone, it’s chaos. Soldiers wander around in headless chicken mode. Many are dead. Many more will soon be.

In a way, we are like that anthill. We have built a complex, successful  civilization. We have welfare systems and Bretton Woods institutions. We have advanced democracy and free, compulsory education. We have market regulators and central banks and human rights and knowledge economies. These are no illusion. Stand in the London Stock Exchange, or under the Eurotower in Frankfurt, and revel in the might of the West.

Yet we are struggling, and we might be failing. A many-sided crisis  – financial, environmental, ideological, societal – eats away at our system. We all feel something’s not right, and the feeling is strongest in the European Union. Look at the graduates without a future, leaving en masse Italy and Portugal and Romania. Look at the many Greeks who have lost their right to health care along with their jobs. Look at the many migrants and refugees seeking to make a new home in Europe, and at Europe being unable to cope. Look at the malcontent, the tensions, the loss of hope.

Now take another look at our anthill. See? There is no sharp line dividing the two zones. The behaviour of individual ants in the center is different from that of their sisters in the war zone: that’s obvious. Yet, it is not clear just where war zone behaviour kicks in. There is a transition zone, where ants are neither at peace nor in chaos. They see the threat, but they are far enough from immediate danger for panic not to be the only option. They can, and do, try to respond, warn their sisters, coordinate.

Welcome to the edge.

Transition zones is where most edgeryders live. It is there, we believe, you will find the key to successful societal adaptation. Why? Simple: because only there do you find both the incentives and the capacity to drive change. In the center, the élites have little incentive to adapt – they are not on the firing line. In the periphery, the dispossessed have little capacity – staying afloat is a full time job. But on the edge it makes complete sense to try long-range, radical stuff out. And we do: we try co-living, sharing economy, crypto currencies, open source everything and stuff that does not even have a name yet. Some of this stuff will succeed and go mainstream, shaping the world to come.

But most, of course, will fail and go extinct. The edge generates a lot of failure: it’s just how things work. What if we could turn all that failure into information? What if we made that information into a common resource we all can learn from? There’s an opportunity here.

That same sensed opportunity drives Antiheroes, aka Irene and Kira. They organize Fuckup Nights Bruxelles, where people gather to hear stories of failure by the people who did the failing. I attended some of them, and left quite impressed. Stories of failure are rich, and drive storyteller and listeners to build alternative worlds. What was the cause of X? What could you have done (but did not do) to fix Y? How could you not see Z coming?  And there is an added bonus: you can’t talk about failure without being candid. You have to stop pretending you are brilliant and successful and on top of things all the time. This creates an environment low on hustling and strong on truth. Learning ensues. So do human compassion and fraternity, because – guess what – everybody fails.

So, Edgeryders teamed up with Antiheroes to produce our next community event: Living On The Edge 5 – fail/unFail. It will be community-driven and no-spectators, like earlier LOTEs. It will focus on failure, like Fuckup Nights. As always, it will welcome everyone, especially the Edgeryders and Antiheroes communities.

LOTE5’s program is still in development, but it already lists cutting-edge activities and participants.

See? We’ll be failing – and learning – in style.

More is coming. Much more, because we all build LOTE5 together, and, as always, no one gets away with being a spectator. New people will show up, and they will bring their wisdom to the search, and their energy to the party. Everyone is welcome, and we have work to do for everyone. Give a talk or lead a workshop, help run the kitchen or be our Tweetstar, everyone is important.

What will you do? We hope you will join us. Click here to find out how to.

What a great metaphor.

Our global society as an anthill is beautiful. I know you have been using biology previously to explain social change phenomena, and this too is inspiring. I even read the post to some of my non-edgeryders friends and they now understand the edge, in normal words and all.

Looking forward to Brussels! I realize it would be great to consciously make room for supporting each other as humans, across the different fields of work. Diversity will work its magic for sure, but in a way, I’d like to see everyone coming finding a voice as storyteller of failure of sorts and not risk being stuck as a corner conversationalist (especially if failure touches on different levels of comfort). I’m hoping some of those coming, like @krismartens, will be essential in bringing up things like non political failures.