White paper on SSNA as a suite: invitation to collaborate

Ping @IvanC might be something we can work on together

As discussed, I can take lead on writing the “Software stack” section. I could also contribute to Community management and Community engagement. Possibly also “Coding for scale”.

Just seen this. I will check the overleaf document in the next few hours, and will try to contribute to the best of my capacity

Thanks @markomanka. All, I have just finished a first pass at section 1. Phew! It is a big undertaking.

I was talking to my partner, Greg, about anthropology yesterday. Greg is a mathematician (his PhD is in mathematical physics). I was lamenting that I did not know when was “enough” in terms of what we call “thick description” in anthropology – what we discussed as “stories” in our white paper meeting the other day, and what we also call “evidence” in our SSNA paper. I said – to capture all the nuances of the situation, there are so many sub-arguments that I want to argue underneath my main argument. But I don’t have room, and no one will read an 10000 page tome (plus, my thesis has a word count limit of 100,000). How much is enough to evidence the argument? And how much detail do I need to take the argument into?

He said this reminded him of Taylor’s Theorem, which he proposed might help me metaphorically. I’ll explain it below in an oversimplified form. 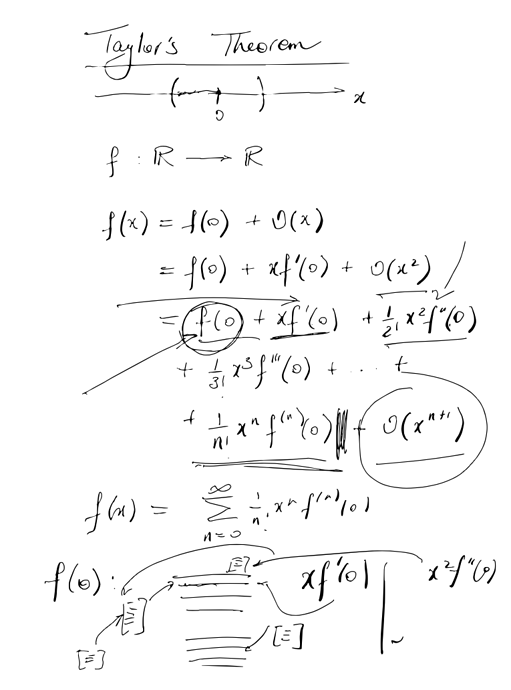 The answer is to start with a zeroth order approximation – in this illustration, f(0). We can take a range of values very close to zero (the range on the number line at the top). And then we have the next term, O(x), which tells us the error. OK, we are not satisfied. Let’s add another approximation, which turns out to be linear, xf’(0). And we keep going until some point at which we feel we have approximated enough and the error is low enough that adding another approximation does not add significantly to our understanding of the function.

He proposed, based upon our conversations about anthropology, to think about it in that way. We make our best first order approximation, and we look at how much of the big complex story (because humans and human behaviour are extremely complex, very contextually determined, etc) is left out when we do that. OK, not good enough. Then we go and add detail to the description we already wrote (this is the diagram at the bottom). Still not good enough. OK, add more. Then we go until the addition of new information or “thickness” doesn’t add significantly to the understanding of the phenomenon we are describing (or until we run out of room).

I think it’s a useful metaphor, and it maps on to the idea of “theoretical saturation” that we have in social sciences, as well. And anthropological writing is always an approximation, because to not approximate we would have to write every detail of the story. The question is – what details are our strongest, most relevant, to explain the phenomenon we have observed?

This doesn’t really answer “how we know what we know”, but it does help explain how we get there and how to explain anthropological knowledge production. (I was also reminded of Bayesian inference a bit, metaphorically, when we discussed this — because it also incorporates the idea that given more information, your explanation of a phenomenon/ability to predict an unknown becomes more accurate in somewhat predictable ways.)

I can commit to reading through the chapters and provide feedback.

Can I ask @amelia, @hugi, @johncoate, @noemi, @nadia, @markomanka and @melancon if they are still willing to contribute to the paper, and in what time frame?

if they are still willing to contribute to the paper, and in what time frame?

I have set aside significant time this week, so yes, I am still onboard. Will hopefully have a draft of my chapter ready before Friday.

I no longer have permission to view it, though I believe I did before…I did make a couple of edits when I first saw the document, but since then have not and now I can’t see it.

I no longer have permission to view it

It appears I have the same problem. @alberto, could you check so we still have access?

Will do by Friday this week

@alberto, could you check so we still have access?

Nothing has changed. With Overleaf, you can have access either if I add you as collaborators (requires account, possibly even pro version), or if you use the edit link, which I shared before. My mistake was to include a vanilla link copied from my browser bar, which of course does not work for you because you don’t have the right cookie.

Still recovering from COVID and am behind on a lot of work – I’ll be catching up on this but likely won’t be able to do it until December.

Just an FYI; I am working on my section on Google docs until I remember how LaTeX works - it’s been years since I had to touch that syntax. Once I have a draft I will try to TeX-ify it as best I can.

Yes, sure. Just beware the Markdown syntax of # Header, because it breaks the compiler.

Hello all, I have resumed work on the White Paper lately (read only link, co-authors also have the read-write one). Here is an update.

The White Paper turns out to be quite a large endeavor. The current version stands at over 8,000 words, and is far from finished. Plus, it is only a draft; even the parts that are already written need at least one substantial pass. I am not clear how close to finished it should be before we put online a first version.

On the other hand, it is a really valuable comprehensive document. I imagine it will not be read back-to-back, but rather consulted.

To complete a first draft, this leaves:

When that is done, we will need to attack a second draft; re-read, edit, address the comments (I have already left many, I don’t doubt many more will come).

Are you guys still up for this, or should I stop investing time?

Are you guys still up for this

I am. The reason I stopped is that the tech stack looked like it was going to change, with a new Graphryder arriving earlier than I’d first expected. That might bring about changes that should be included in the white paper, so I’m waiting for that to settle.

This is the work I’m currently doing to define the next version of Graphryder.

After catching up with @jacomyal it became clear that we need to define some more detailed user stories for RyderEx before we begin. How this dashboard will be used Most importantly, we will use this dashboard to conduct our research. An example of our research can be seen here: Furthermore, we wish to start using our graphs to engage the participants of our various forums. We think it could be a novel and engaging way to interact with an online conversation to explore it through filtering i…

Once we have finalized the features and technical choices and start the development of the new version, I will come back to the whitepaper and write my section based on that.