One of the Edgeryders missions in our current campaign We, the people looks into traditional political participation. We ask young Europeans if they are members in a political organization and how they feel they can make a difference or if politicians listen to what they have to say. The reasoning behind this inquiry is that surveys point to a growing lack of involvement on youths’ part and a gloomy future of party politics. A decreasing participation at the polls and a widening age gap in turnout are no news when it comes to youth in established democracies around the world (a graphic example from Canada can be seen here). Only 5 percent or Europeans aged 15-29 were involved with a political organization at the end of 2011. The general decline in youth party membership was obvious years ago and led scholars to conclude that if young people abandon youth organizations of political parties now, it will become more likely that, in future decades too, political parties will find it increasingly difficult to attract new members.1  So it makes sense to talk about formal participation, and even more so in times when it competes with new channels available to influence decision-making. Research from the 70s and 80s consistently showed that a young person with good socio-economic background, coupled with some extra-curricular activities in school is more likely to become interested and actively involved in politics as an adult than her counterpart with a lower status.  A generation after that, it appears that education or civicness no longer help us anticipate who becomes political and who doesn’t, or what to do when not enough of us young people participate. What causes youth not to follow the steps of their parents and grandparents? There are several hypotheses scholars and observers rely on to explain decreasing poll numbers, here are some I find most convincing2:

Which of the above resonates with you or is more convincing? Join the platform and talk about your experience directly with the community. Also, if you are aware of alternative logics for youth disengagement with electoral politics, please comment below and help us get a fuller picture! Finally, why is it important to talk about youth participation? Literature is consensual in that participation is a stable behavior after the onset of adulthood. Assuming that young people don’t bother to go to the polls today means they won’t do it in the future either7, and so the crisis of representative democracy will deepen even further. Who will elect our officials if not a small minority?8 If indeed they are turning away, institutions are responsible to look into why this happens and how to bring them closer. 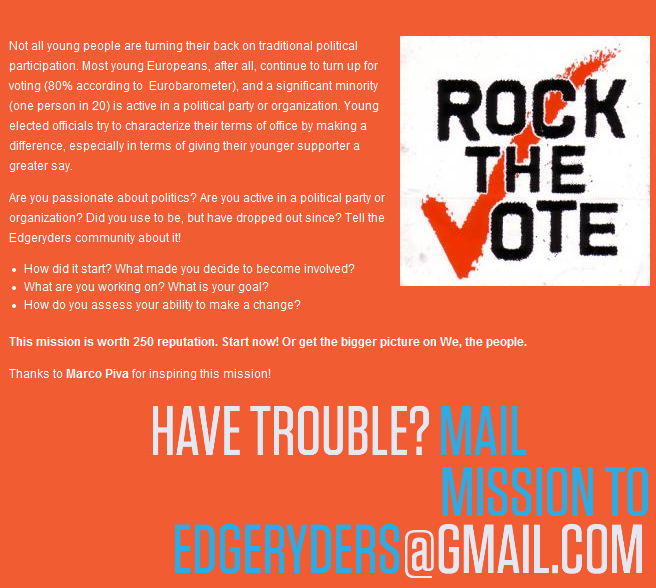 2 These hypotheses have been launched and tested in relation with North American and Western European countries, much less is clear in Northern and Eastern Europe. The later maturation in particular has only been tested at aggregate level, so it may not explain individual choice of not voting.

7 According to the habitual voting theory, some people always vote and some people always don’t vote, it’s a habit acquired particularly in the first two or three elections a young individual is called to participate in. To put it simple, the easiest way to predict if someone will vote or not is to look at whether they voted in the previous election. Scholars have turned to this developmental model of voting so as to find an explanation to the paradox of rational choice: in our decision to vote we weigh the cost and benefit of influencing results and so rationally speaking we would always abstain, as our vote is not likely to make a difference. Read more about habitual voting in Plutzer’s work here and about the two approaches and critique in James Fowler’s introduction here .

8 For example, an average of only 4 percent general decline in the democratic world between the 70s and the 90s (according to IDEA) can surpass 10 percent in the following decades if new voters, not having learned the habit of voting, don’t follow the footsteps of previous, more engaged voters.