This is the documentation from the 3 hour workshop I hosted in Berlin at an event with cultural workers and project leaders in the Mediterranean and MENA region. Some people are part of the Cultural Innovators Network (CIN) funded by Goethe Institute to support social transformation in the Mediterranean region.

How the workshop was promoted:
#OpenVillage: connecting community spaces for living and working together in the post-job economy
How do we build communities which deliver cultural, social and economic value, but care for members’ well-being? OpenVillage is an open project in-the-making by Edgeryders. We design, scout and create together spaces where people can work on their projects by joining their time, money, equipment to produce sustainable work.
Do you have a project using open knowledge and technologies? Are you a member in co-working networks, creative collectives, a squat or any community? Do you want to join one or learn from others? The workshop is organised in three parts: 1) Show & Tell: learning about participants experiences 2) Challenge space: exploring 3 communities, physical or online, and how members collaborate 3) Connecting our projects in a 5 month roadmap, mindful of each participant’s limited time. 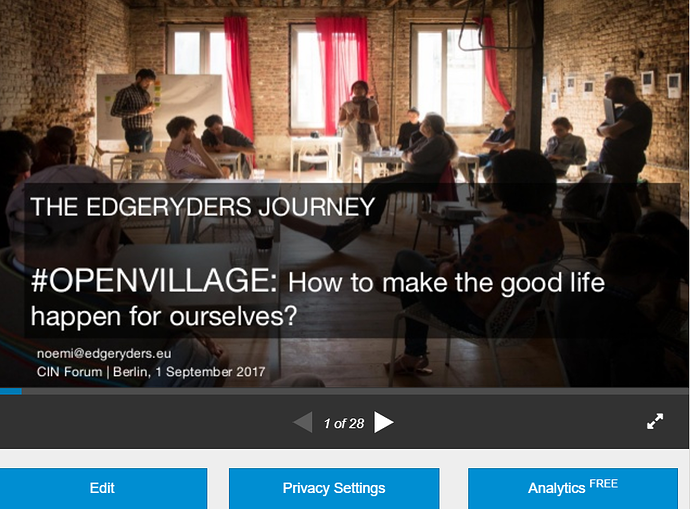 The reactions and general feel in the room was, in my view, of being overwhelmed, in a good way.
The presentation was a stop & ask kind of delivery because people had SO many questions.

What the group work revealed 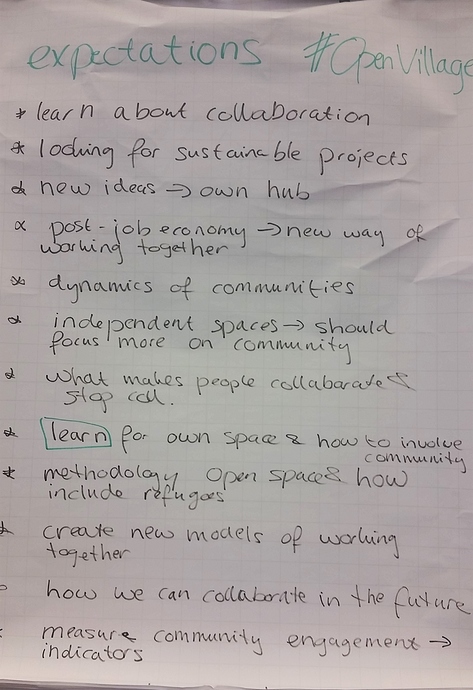 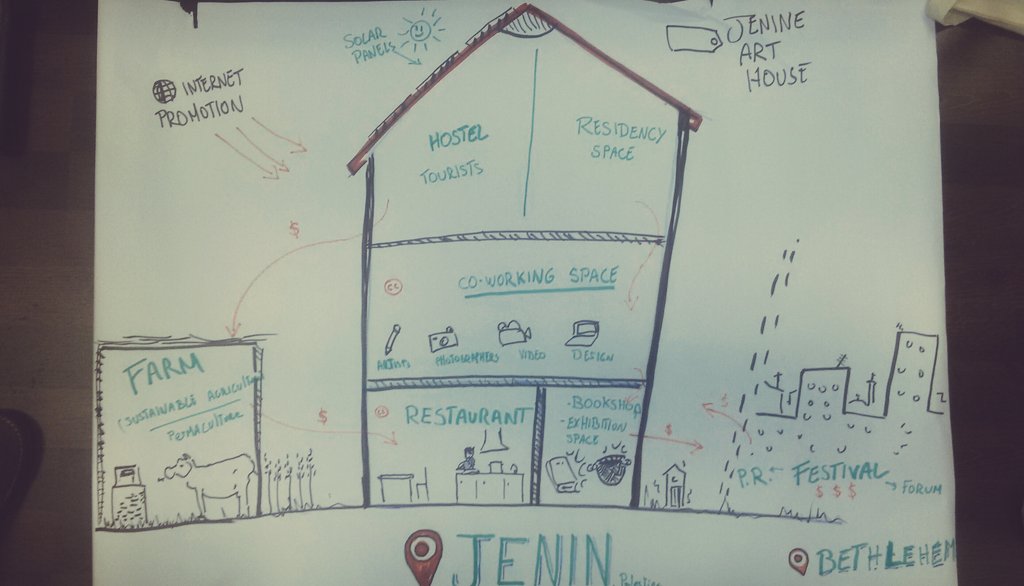 Sotiris’s group:
-They dreamed up two openvillage cases: one in Egypt, one in Greece. The one in Egypt, an idea Amira has, seems it’s less of a distant dream.

Helga’s, Vladimir’s,… group:
A group in which none of the member’s work was directly connected to the possibility of living in a house together with others. They only talked about how their projects can progress in collaboration: reach out tactics, mentorship.
“We need to professionalize… especially grassroots groups where there is no sponsors, but communication channels work very well.” (In the context of a self organised film festival)

Designed a project considering 5 points: unique differentiator for the project, alternatives around, and what would make it work, ways of funding the project and IP as important for opensource.
Jenin - Maysa’s city in north Palestine: she wants to crowdfund for Jenin, and create a co-working space where people can come to work and it would engage the local community of farmers and people to work the land - i.e. agriculrural and tobacco fields. The space could interest tourists and locals - a hostel and a restaurant, residencies where tourists can coma and stay. The artist side can be a workshop space, cooking together space based on what the farm is producing. All the projects would be licensed cc.

Seems great. Bookmarking for when you complete your cliffhangers: “what the group work revealed is …” ???

just a quick replay ( I need to do a write up on this soon )
Mesaha making something in Siwa is an indicator of why no to go in a big city ( in my interpretation ) not in the argument of Rural Vs Cities. but in the sense of getting outside of the center out side of control surveillance and making more solid connected communities with the rest of the world.

I get this feeling when talking with people in Cairo, even when talking about open village ( ah then u should go abit outside sinai siwa fayoum or souther )
but again may be this is a particular case in Egypt.
will write more detailes soon.

happy Eid and greetings from Cairo

@hazem good point, but… is it not specific to Egypt?

Hello everyone,
I’m Lorenzo, i participated to the workshop by Noemi this morning and we developed, in a small group this idea.

Starting from different topics we found out Maysa’s project of creating a coworking space in Jenin, Palestine. And we discussed on how to make this need work well and be useful in Jenin’s context.

The coworking became a center for arts and crafts where to develop with craftsman, chefs, people, artists and farmers different projects which have something to do with sustainability in order to engage local community and offer Life possibilities in one hand, and reach the outside international community in the other by hosting tourists and interational residencies.

The space would consist in a workspace for arts, manual works and kitchen - with a farm and contacts with farmers around. There would be a public restaurant and an hostel for tourists and people who make residencies - which would bring funding to the entire project.

Another way to fund it would be the possibility to make a festival im Bethlehem with market of artifacts and cooked recipes from the project.

All the products, recipes, and the project would be shown online to interest the international community and licensed under Creative Commons licenses.

Hope the idea could florish. We can continue to talk about it. Maybe open another Thread.

I loved the idea and I think you should check the proposal that @matthias has done concerning the network of communal spaces (https://edgeryders.eu/t/proposal-for-a-network-of-openvillage-houses/6785 and I am super interested in what you are doing, I am still developing the idea of my space as well, so I will share with you any new thoughts about developing the space whenever I have one

Each one of those components - restaurant, hostel, co-working space, farm, etc. needs its own business plan. Individually these are among the hardest businesses to succeed. The “margins” are very tight, even when working well. Putting them all in one place may or may not bring the desired synergy. That is not a given.

And even if it is a post-job economy, someone has to lead each part. Unless it’s all one-person-business, others will have to work and help but not lead, or lead in their own domain and help/follow in the others. These things have to be thought through and agreed upon, at least in a basic outline of structure, before going too far along, because once you get started there will be plenty of things to occupy one’s time as you “make it up as you go along.”

I agree. But i think that synergy between business should make each one of them work. Plus it has to be thought for a place like Jenin which is not so turistic and you dont have so many competitors…

Hello from Nepal Lorenzoci. (small country from south Asia). I have to say, it is brilliant idea. I and @matthias also talked about initiating “Open House Kathmandu”. The concept in someway is like yours except the farm will be replaced by coffee roastery

. I am still working on the plan.

Would you import coffee or grow it?

Coffee Arabica can be grown almost every part of the country. I am not thinking to grow coffee myself but will encourage and train the farmers in remote villages for coffee farming. I have my own family land at one of the potential village, I can utilise the local resources and import to city. The Open house will have Roastery where coffee beans from village will turn into final product( Roasting, Grinding,Packaging,Labeling) .

What I like most about integrating a roastery with a co-working / co-living space is that it’s a potentially high-margin business, esp. when it comes to direct international trade. This way, it can cross-finance the other strains of business if and while they are not contributing much or struggling. So John’s point about having only low-margin / difficult businesses in a space would be avoided. In your case, you may choose a different type of highly profitable business, but it’s hard to overestimate the importance of having one …

You can also read about Edgeryders existing involvement with coffee farmers in Nepal here:

As one of the first new endeavours Edgeryders is contributing to in 2017, yesterday we launched a marketplace with six smallholder farmers from upper Gorkha, Nepal, selling their coffee beans to European customers. (The marketplace is epelia.com, and for more information see the official project blog.) The idea is to pioneer “globalization done right”: leaving out trade middlemen creates a novel, P2P way of economic development. No donations needed, just paying normal market prices while farmer…

Yes I think having the onsite roastery is a large step up from just being a cafe.

one idea that can be integrated if you have the space which can turn to be a profitable business as well is hydroponics farming @Konnbat can explain more about this. ( check his work here in Egypt at nearly the same climate )