In a tactical attempt to lift our visions beyond the next mealtime, we went all historical.  Three groups formed to look back upon the various epoques that have so influenced our unMovement the last 200 years…

This session and the one on the unRule, as well as stories of rant and amusement I’ve heard&shared around our evening pizzas made me think that the format of short snapshot story can be a good addition to other means of communication we have.

I will write a bit more on this in a separate post or a wiki, but as the plaform functions for me as a part of extrenal memory, I drop this comment here.

Short stories might be useful as a means to air the unMon as well as for internal communication (if there is, yeah, much difference between external&internal in this case). As vision-lifting tool and as the unRule’s Additional Protocol.

Kets; (and everyone else who attended these sessions which were profoundly valuable as they allow us to freely explore our inbuilt weaknesses before we even start.)

I was going to ask you to do this.  Write out your version of the 200 year story.  The groups dispersed before this important work got done.  I’m trying to reconstruct the group that I was in, but I got called away on urgent business so in is painful archeological work bending over tiny fragments and filling in the rest from my own imagination.

If you could do something similar from your group ?? – I’d even accept your field notes and then, with your permission, perform my restorative operations upon them.

that kind of hug,

We want the documentation!

Where is the documentation for this session, everyone? This should be one of the more fun to document!

Bembo is currently compiling each 50 year period from different groups into a single text. I’ve no doubt it will be done soon.

We do indeed want the documentation

As stated above, I wasn’t there when the three histories were revealed to the collective session.  I have managed to recreate some kind of story from the third session on the watershed for interspecies cooperation, but this needs be ratified.  The other two explorations are beyond my reach, and I am dependant on someone doing the effort to invent something in the spirit of their groups thought process.  At this point accuracy isn’t  vital and a good personal version could do wonders … who could do the Age of Expansion and the influence of the Matera School, and who the unMo Wars and the Great Schism??  -  K, Ben, Arthur, David B.?

the schism session ended with walk through the period - collecting the ideas - there should be an audio recording of that on Arthur’s [AD_Admin] mobile-smart-thingy.

When Prophecy Fails? *and unProphecy Doesn’t 1

I have spent about two month at the unMonastery. This thread I found a hospitable place to write my first comment in ages.

It was a significant kind of thing for me to come to the physical space, which has been a dreamed up by and worked on by people worth mentioning in a conversation.

Birth of unMon happens few days after I met them: commonly referred to as Edgeryders, if any collective nouns applies. Individuals to be admired for different reasons and skills, with the ability to smoothly transform into a swarm and back. Very smooth.

And then it became an image, cooked up in Brussels in that Egg space. The unMonastery we are capable of carving in stone in any state of mechanical bodily restraint and intoxication, as well as embroider with pearls and beads, quils and sequins in the dark with our fingers chopped off.

Then I saw @Alberto post “Hello all, I am in Matera”… 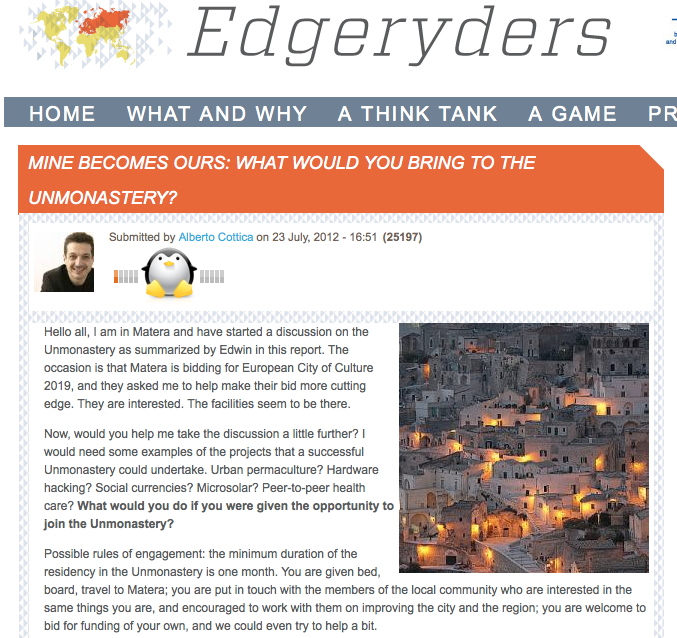 And others. To be mentioned. Note to self.

Anyway, to make a long story short. I came to this physical unMon made of stone, and other matter and people who haven’t seen me before.

Just before the opening. Missed my “rescue mission”, sorry @Bembo. Two things which I found:

unMonastery had an Italian Phone Number, and the the address which was written on the box of cookies.

UnMon was quite real long time before the cookies could be delivered to a particular address, but it was kind of fun to see how it acquires different definitions and levels of reality. 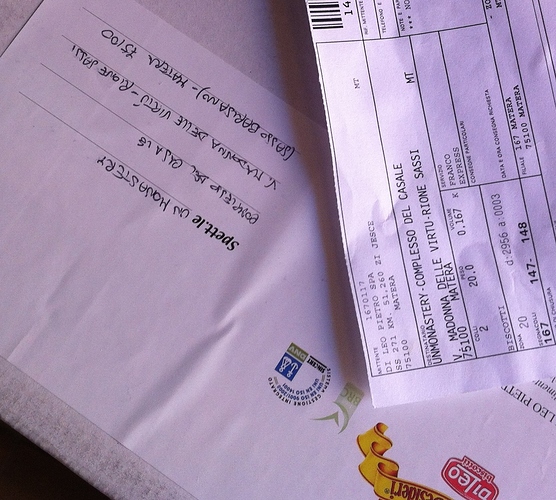 It turned out, though, I existed in quite a few conflicting realities: the form I haven’t filled in (I wouldn’t go into why and should have now, but I didn’t think) which could make me real in formed-filled people’s eyes. Simple. “the possibility of physical and mental collapse is now very real. No sympathy for the Devil, keep that in mind. Buy the ticket, take the ride.”

Speaking of prophecy, is it the mini version of schism happened…in my head. Also, in the definitions, it’s not the first time in history that the definitions collapse.

But anyway. I’m Sorry @Ben that you were interrogated about the definition of me. This is the only thing I take seriously that it caused you some… blah. Other things I saw, I wouldn’t consider even embarrassing - might be just enough for an undergraduate dissertation in social psychology.

At unMon and few significant days away from unMon I had time to look around Matera, start conversations about the unMonastery and life in general with people I meet and luckily can communicate with. Worth making more time space for the unMonastery and unMonks whatever it may mean in different realities.

Made it easier to think what I can do right now, in or outside of the unMon, to contribute and support the slow and the real processes that unMon can shelter in the future.