We had the big conference end of June, however, that does not mean we wont be meeting up anymore. On the contrary! The conference lead to many inspiring ideas, connected interesting people and projects and emphasized that in order to get things done, we should work together. 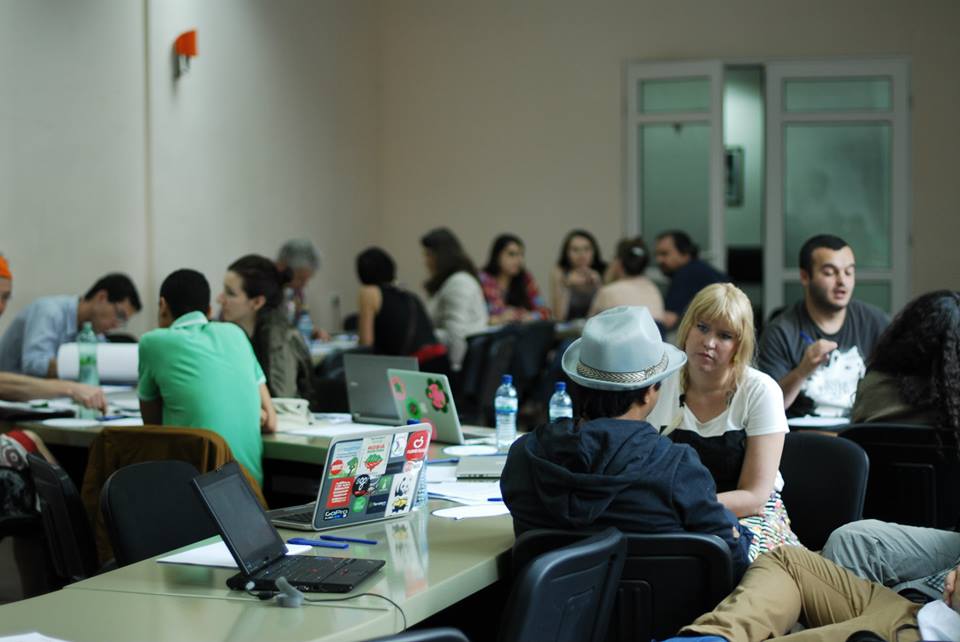 Therefore, our 7th bi-weekly meet-up will take place this Friday at 5pm at Bauhaus cafe (where else ;).) If you have never attended any of the meetings, please feel free to join us! The meetings are aimed at sharing ideas, projects and are a place where you can ask for necessary help: we all have our challenges and our skills and together we can try to diminish the challenges in order to get to our goals.

Hope to see you all Friday!

Not there, with you at heart…

Looking forward to see what comes of your regular Bauhaus meetups…

Budapest was great but really intense, after being brainfried from futurespotters, being involved in another week long conference (very interactive one, luckily), I was dead most of the evenings and my body told me to stop when I came back: acute bronchitis! I guess I pushed myself a bit too hard…

The meeting was a success, and we’re actually thinking to create a Hub (or, we, Khatuna proposed it), where we have our own place in an open and free location (perhaps a university?). Will keep you updated on that!

Looking forward to what comes out of this

It was great to come together again! And what a productive discussion it was

We spoke about workshop Government organized on the innovation strategy, which lacked participation and grassroots action - opportunity for Futurespotters and UNDP to contribute is clearly there.

There is need in more awareness raising and exchanging expertise. It was interesting to hear that Georgia should try to attract not foreign investment, but rather foreign capacity-experts, practitioners in various fields who would be willing to live and work here (food for thought).

We planned a workshop some time in September for the Futurespotters group and whoever’s willing to join on COMMUNICATION for social action - whether joint projects, activities, actions. i.e. how to capitalize social media, outreach, etc. -Will have to follow up at next meeting to assign who’s doing what on this

We also discussed my idea of UNDP bringing together various actors in Georgia in the form of a hub, with a neutral space where we could all agree on common action/or supplementing each other’s actions, rather than competing. This would also allow for presenting interesting actions initiated at grassroots level which can be presented to others for shared expertise or support.

We also thought it could serve as a place where short-term experts invited by various aid/development agencies could have open lectures/ workshops to meet local partners;

I spoke about consultations that took place between Jumpstart, UNDP and 112 emergency services on extending the services to people with disabilities. Depending on the availability of funding, we could organize a design thinking workshop to map a pilot procedure through which this can be accomplished. Timeline - some time in October.

I also spoke on Micro-Narratives project UNDP is conducting in Georgia. I will most probably talk about it separately at one of the following meetings, and blog- will share the link later.

Inge, please add whatever I might’ve missed :)…see you in a month’s time!

Wha! Khatuna, you are a hero!!

As I was too lazy to make notes, I was already afraid I wouldnt be able to make a good summary, so glad you did!!

It seems exactly like what we talked about. I would like to add the 3 innovation camps that are being organized simultaneously and how we can streamline these things more in the future (same with the innovation days & futurespotters 1st workshop). And a possible campaign on empowering young girls to pursue science & entrepreneurial careers (in reaction to Jumpstarts feraldi poster).

And for all the other edgeryders on here: I am terrible sorry I have not been active online since the conference in Tbilisi: budapest was insanely intense and I got bronchitis when I got back, like having an asthma attack for a full week, i thought I was dying. Now I am back on track again and thus will be more online! :))))

I almost forgot, but Nika mentioned he thought somethings on edgeryders were a bit confusing to him, such as the term ‘stewardship’, and the realized we also didn’t really know how to explain this term. Suggestions?