A tale of three communities: a network analysis of the Twitterstorm

I finally got down to doing a more or less proper network analysis of the Twitterstorm. I was surprised by how clear a story it tells, even as I have been using basic analysis techniques. I was interested in two questions:

In a nutshell, what seems to have made collaboration effortless was network architecture. The overall network partitions naturally into three subcommunities. The green people on the left are almost all Italians, living in or near Matera, or with a strong relationship to the city. The blue people on the right are mostly active members of Ouishare, a community based in Paris. The red people in the middle are the Edgeryders/unMonastery community. Coordination across different subcommunities is achieved by information relaying and relationship brokerage at two levels: 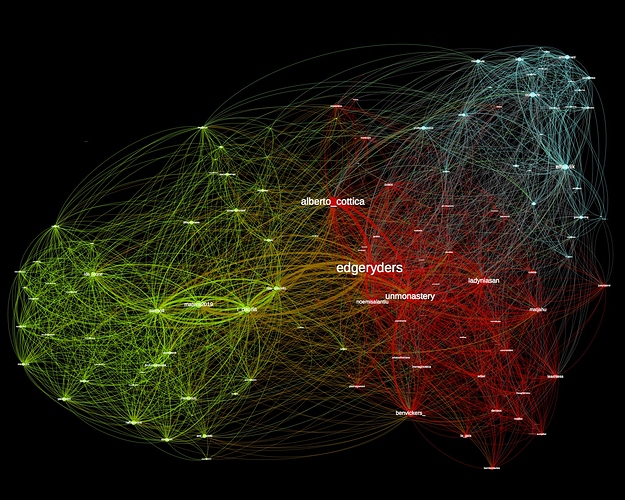 Also in a nutshell, it seems that we did indeed build community. To explain why, I start by resolving the overall Twitterstorm network into a “static” network  of follower relationships – representing more or less endorsement and trust – and an “instant” network of mentions and retweets – representing more or less active collaboration in the Twitterstorm. Both partition naturally into the three subcommunities, just as the overall network.  Let’s look at the action network, and color the nodes: redder nodes have been more active in mentioning and engaging the nodes they are connected to. The redder areas in the network are not within the subcommunities, but across them: most of the orange and red edges connect the Matera subcommunity (i_dauria, matera2019, rita_orlando, piersoft) with the ER-uM one (edgeryders, alberto_cottica). On the right, elfpavlik is busy building bridges between Ouisharers and ER-uM. So yes, we did build community. You are looking at community building in action! 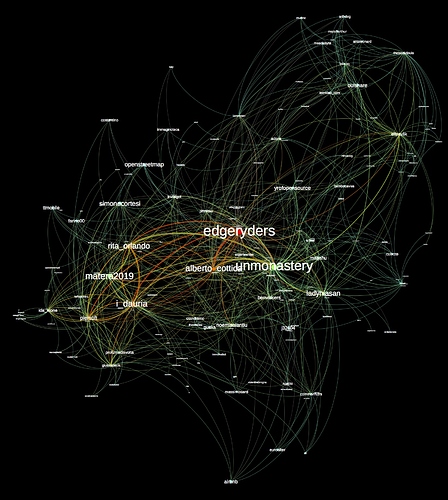 See a deeper analysis with more visuals at http://goo.gl/5wSYvS.

The business corporation as a symbiont to a community: Edgeryders crosses a watershed