AMA - On the smart city with Bas Boorsma and Gordon Feller

Cisco and Google are folding their Smart Cities operations. We are Bas Boorsma and Gordon Feller, and are helping to rethink the role of digital technologies in cities. AMA!

In December 2020, Cisco discontinued its commercial offer of a Smart Cities Dashboard. Earlier in the year, Alphabet withdrew its own controversial Sidewalk project in Toronto. What is happening to the idea of Smart Cities?

The concept of Smart Cities is the integration of several system-management cities, from energy grids to traffic, into one coherent whole. A myriad networked sensors would feed real time information

Urban planners never liked the idea: that we know. In 2013, an urbanist called Adam Greenfield wrote a pamphlet called Against the Smart City. A city, he argues, is by definition emergent. It accelerates unplanned interactions, and from those, it derives its buzz and novelty. A living city can never have a control room; if it could, it would no longer be a living city and become unsustainable. Most civic groups agreed, their pressure leading to the abandonment of schemes such as Toronto’s.

Despite these reservations, industry pushed on for the better part of 20 years. In 2020, it seems, the mood has shifted. Why? And if the original Smart Cities vision has failed, in which other ways will the urban fabric integrate digital technologies?

We are Bas Boorsma and Gordon Feller. Bas is professor of practice urban innovation & smart city at Thunderbird School of Global Management, author of ‘A New Digital Deal’ and former Cisco executive. Gordon is a co-founder of Meeting of the Minds. And you can Ask Them Anything!

Join us and others on March 29th at 18:00 CEST for a live-chat AMA about smart cities! 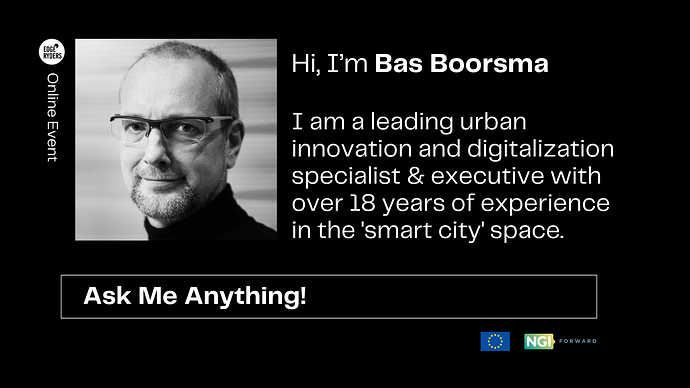 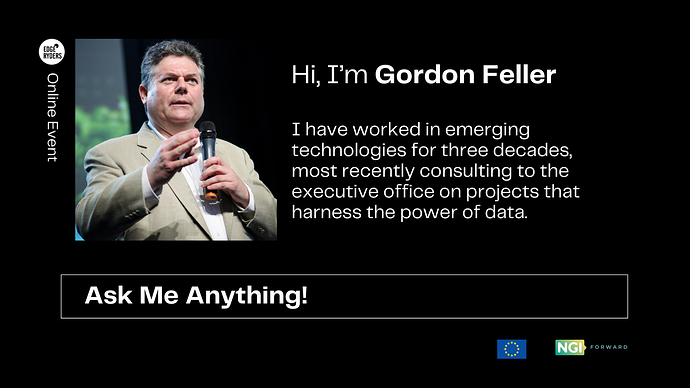 What is an AMA and how does it work?
AMA, or Ask Me Anything, is an interviewing format popularised via Reddit. In short, you ask the features “expert” questions, and they answer them live for an hour.

How does it work?
Anyone is welcome to post questions/comments below. On the announced date, the featured speaker(s) come back to this thread to start answering questions they find interesting. They will do their best to reply to as many questions as possible, but please note that not all questions/comments will be addressed.

Who can join?
Anyone! As the conversations get going during the hour, you will see multiple threads naturally emerging. There is an open invitation for everyone to contribute–please feel free to reach out to other community members, either on the thread or via DM, to continue the discussion!

Register here to get a reminder and the link resend an hour before the event: https://tell.edgeryders.eu/15532

We will ask them how they think the original vision for the smart city has changed
You ask them your question!

24 posts were merged into an existing topic: Cleaning the thread for AMA live chat - Smart city

I will join the live chat on March 29th, 18:00 CEST
“Smart cities” can be seen by ordinary people as technological elites forcing social engineering via their powerful technologies. How can democracies flourish if technocrats are the unelected arbiters of social control?

I will join the live chat on March 29th, 18:00 CEST
Thank You for this chat on this exciting topic. Is the current shift in Smart City vision an organic iteration of innovation by Cisco and Google Sidewalk (and others) or is it a societal shift because of the pandemic that has changed us in a fundamental way as a society?

I will join the live chat on March 29th, 18:00 CEST
Do you see smart cities need a new business model that is not dependent on monetizing user data given the diverse stakeholders involved in the fabric of cities?

I will join the live chat on March 29th, 18:00 CEST
What role does mobility and transportation play in making a smart city successful?

I will join the live chat on March 29th, 18:00 CEST
Hello Bas and Gordon, thank you for doing this.

I am fascinated by the huge disconnect between the academic city planning community and the tech companies when it comes to the Smart Cities concept. Academics (the Jane Jacobs/Adam Greenfield lineage, at least) rejected it outright as based on a deep misunderstanding of what a healthy city is. Further, they accused it of being technologically unviable (“brittle”) and even authoritarian (“overdetermined”). This has been going on for at least 8 years, since Against the Smart City was published.

It seems to me that the tech industry simply pushed on, without seriously revising the concept to make it more robust. Is this a wrong perception? What reactions did such harsh criticism elicit in companies in the Smart Cities business? Is the current change of strategy part of this reaction?

I will join the live chat on March 29th, 18:00 CEST
If a decade ago the criticism of thinkers like Adam Greenfield and the Transition Town Movement found severe faults with the smart city projects (that are now failing – see Sidewalk Labs) without proposing a viable alternative beyond ‘disconnecting’ (possible only for affluent individuals and gated communities), we now have a plethora of (fee-less) components from crypto (think of Cardano, IoTa building real use cases), Self-Sovereign Identity schemes on the rise, local forms of organizing, loosely coupled vital organizations like edgeryders.eu (the co-organizing party of this converstion), #IoT Council, the massive success of Arduino, Libelium and SME across the planet facilitating edge solutions that bring analytics and purpose close to local data gathering, and innovative new ways of funding infrastructure like Invested Public Network, a platform and processes which allow citizens, businesses, and organizations to invest directly into public projects that upgrade local infrastructure, adapt their place to climate shifts, bridge equity gaps, overcome limited borrowing capacity, and shape and sustain a healthy community. As you can see I am very positive. Do you share that optimism?

I will join the live chat on March 29th, 18:00 CEST
Unfortunately, from about 2000, around the time Internet of Things was coined, every technological artefact, program and vision, came to be caught up in the feeling of general distrust in what is now called Big Tech and Big Government. People felt they literally only had a choice between Scylla (billionaires harvesting data and creating new addiction prone applications) and Aribdis ( a hollowed-out state going obsessive compulsive with behavioral control) and everything that was seen to be ‘efficient’ or ‘optimizing’ or creating transparency’ was perceived as belonging fundamentally or ‘essentially’ to either one or the other.
How can Trust be (re)build or regained or fostered with Generation Z and below?

Hi John, can you elaborate on ‘ordinary people’, and "powerful’ technologies? Define it a bit?

Smart city vision commenced well before Cisco or Google got involved. When broadband infra agendas iterated per the late 1990s, the purpose was for cities to think through what next gen broadband would mean for citizen services, education, healthcare. The term smart communities gained in popularity at the time. I believe Cisco’s role - among other tech - has been overstated and exaggerated. Most big tech also overestimated how the smart city idea would represent a market opp. In short, the idea of a smart community has existed for over 20 years. Big tech got onboard later, had their go but eventually stepped out, by & large. Urban innovation is back where it began: with city leadership

You know my take Rob: craft ‘A New Digital Deal’.

The tech industry vision of the smart city, if it ever existed in a serious way, suffered from the same faults as some of the highly over-designed ‘garden city’ ideas going back to the early 20th century. It failed to learn from such early experiences or the response they triggered provided by people such as Jane Jacobs. The big tech smart city agenda was always an ahistorical set of efforts, bound to fall into very old pitfalls. Pendulum is moving back in the direction of Jacobs again, with more and more stakeholders appreciating the complexity that comes with density, and human authenticity. One does not create smart cities. At best, digital innovations may help augment the city that is…

What do you think about such a regional planning? And related: how do you see the relationship 5G -smart city?

Yes, I do share your optimism on this. At the same time, I think about one particular ‘downside’ to this, one that I see in various executive offices around the world: the customer is a bit confused with all of the many and varied choices, and with the fact that so many of the choices seems to be good ones that promise some level of transformation. These customers are sometimes sitting in City Hall, working for a local government; or they’re sometimes inside a university, which at the campus manages / operates a mini-city ; or they’re inside a port, which also manages / operates a mini-city.

What do you think about such a regional planning? And related: how do you see the relationship 5G -smart city?

I had a chance to read thru your article ‘Future Urban Smartness’. I’m hoping that this ntion – hot spots and cold zones-cold spots – get some real attention over the coming days, b/c it deserves to be widely appreciated and debated. 5G districts are probably a viable framework for regional plans. I’ve written a bunch of articles about 5G+smart city, like this one, and hopefully they help to explain some of my own thinking: https://www.smart-industry.net/climate-change-and-iot-how-to-save-the-world/

and this one too: https://capitolweekly.net/5g-wireless-cities-smart/

Very happy to hear this Gordon. It would indeed be good to see this 5G district approach sinking in as 'The 5G network, supported by small cells, could spark innovations, productivity, new investment, and industries we have yet to imagine. Local governments are likely to see increased revenue from economic activity. " as you write, also in view of the bigger picture that you address: ML and AI have the power to dramatically change the world of the future – and perhaps nowhere will it be more important than in the battle against global warming”.

“Smart City”, where it is a “vision”, can be BOTH an organic iteration of innovation (by not just those 2 big companies, but by many others) AND it can be a societal shift stimulated by numerous simultaneous realities (climate crisis; economic inequality crisis; pandemic; etc.).

I’ve come to the conclusion that mobility / transportation might play a central role - esp. as we all look back on 2021 just a few years from now. the tech there is evolving rapidly; it captures the public imagination; the total volume of spend in this category is massive.

Looking forward to the conversation here at 18:00 CEST!

But everyone can join in directly here in the the conversation!