Call for speakers: story about creating your own job

Workspaces Spot the Future Romania
project-spotthefuture-romania, cat2-none
alex_stef July 31, 2017, 6:38pm #1
Hey guys,
This is the perfect community to crowdsource this, so here goes.

This Sunday evening HeyMarie.ro will host a șezătoare (if anyone has a translation for this word, I’m buying you beer) about the jobs that we craft for ourselves in a market where opportunities for meaningful and paid work seem scarce… to put it mildly.

We’re hosting an open conversation about the jobs of the future that we’re actually building now, when quitting corporate, bureaucratic or conventional positions to work on projects that feel significant and true(r) to our beliefs.
It’s a struggle, isn’t it?
We’re not looking for cosmetised success stories or shinny personal branding pitches, but for an honest account of the process of crafting a job (so something that also pays the rent… eventually) from skills and ways of doing things that didn't fit the employers’ grid of objectives or common practices.
The setting is green and summery (Herăstrău Park, at Roaba de Cultură) and the speaker is merely the brave one to go first with hers/his story - we all pitch in this conversation.

Rounding it up: you’re all warmly invited to the 7pm șezătoare this Sunday. I’d be really happy if a speaker (or more) emerges from this awesome group, so if you’d like to be the one starting the conversation with your own story, raise a hand.

I am excited to hear your stories. I would like to share mine, about a foundation (Ceata), an online shop (Tehnoetic) and a social game (Criptofrenia).

Happy to support HeyMarie, I will join the gathering anyway, and if I can contribute with anything - mostly honest sharing, I will surely do so.

Most people I know who do interesting things don’t have a “job”, they rather “do work”. The two are fundamentally different in the social norms they respond to, the flexibility they offer and especially financial security. Having a job feels like last century.

So happy you guys are joining, yours are precisely some of the stories I had in mind when thinking about people crafting their own work & lifestyles.

“Having a job feels like last century”… indeed! Wonder if everyone coming will feel the same way about this.

Looking forward to Sunday, and to tonight’s collaborative pizza making!

Good topic for a șezătoare

I’ll try to come and maybe who knows, I’ll find the answer to this torturing question: “Can I make money doing what I like?”.

For me, in this particularly moment (preparing to be a mom) this is difficult because I feel the need to have a steady income, so i think more seriously to get a job. So I’m kinda in the between right now.

Uff, that’s the big one. I haven’t found an answer yet, but thinking about this has made me give up on things that I can live without (pressure to reach a certain economic status, for example, alongside some of my consumption choices).

Having a baby on the way I’m sure changes the calculations and steady income probably doesn’t sound as much of a luxury as it sounds to me now. If you can’t make it to the șezătoare this Sunday, I promise to ask this one for you and report back. Who knows what the wisdom of the crowd will bring…

Indeed this is a tough one.

What I noticed is that women tend to make sure they have a steady job before having a baby for receiving the money that the state provides.

Depending on your line of work I think you can find activities that may bring some income but not necessarily a very steady one (unless you started a business some time ago and it’s already successful and can flourish even if you work less).

An opportunity to explore  would be activities/jobs that are related to kids (books, toys, clothes, nursery etc.) or anything that you can work from the comfort of your home

@Iuliana_Dumitru, check out Work at Home Moms Romania, they seem to be a cool, supportive community.

@Noemi regarding paid maternal leave and maternal assistance for PFA, here’s what google dug out: http://ateliercontabilitate.ro/pfa-concediu-de-maternitate-vs-concediu-crestere-copil/

What I took out of my first Sezatoare!

Great event, @Alex_Stef, so looking forward for the launch of new issue of Hey Marie (end of this week?).

One of the questions in the air at the event which for me was spot on, had to do with how we prepare for the future if we can’t afford to invest in pensions and insurances. Because it helps us think one step further, actually accepting that we won’t have access to the usual benefits our parents have access to, or increasingly less so…

The answer I took with me is threefold, and confirmed somehow by the Edgeryders Guide to the Future: 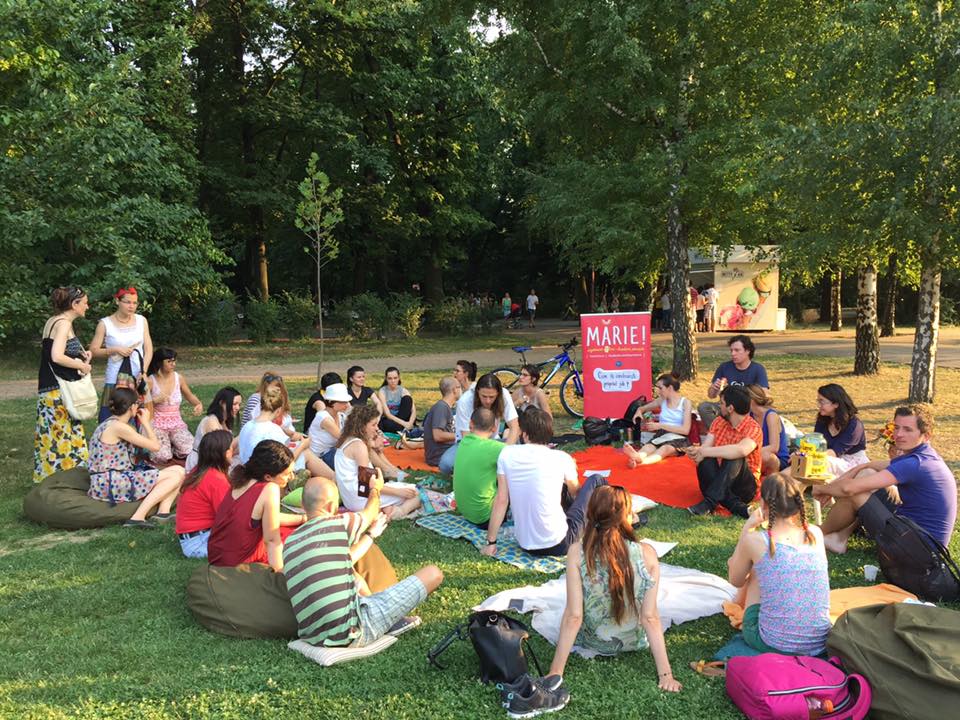 Put it another way

JM Greer would sum this up as:

“Collapse now and avoid the rush.”

If you’re into future spotting without flying cars for everyone that is an interesting, if somewhat emotionally challenging, corner of the internet. Not terribly strong on technology and perhaps a tad too negative about ICT. That however may make it even more valuable for us.

Re the Guide to the Future - why do I see this only now?!

Not so much expecting collapse as building autonomy

Noemi’s three points conclusion really stuck to people’s minds when she said them live at the event - I’ve heard several people mention that. And I believe the instinct to prepare for a future where conventional, welfare-state safety nets might not exist is spreading. Not sure if out of the pessimism of expecting a collapse (so not being able to prevent it), or out of our own evolution and need for independence, albeit also living in communities of our choice and investing in those commons. Autonomy is a healthy route, I believe.

The Guide to the Future is a great document, happy to also discover it! So much win here: “There is a pressing need for new cultural norms which accommodate the location of young people’s transition in an increasingly difficult socio-economic climate. A key part of this should be the development of a new language to describe young people’s transitions, the kinds of lives and futures they are seeking, and the terms on which they want their contributions to be valued.”

Language is a very good point

I wonder how this is in (the different) smaller language communities - there are of course always some words missing/forgotten that would be useful to describe, plan, and communicate about life at the edge (or margin?). And on the other hands “charged words” that basically restrict the frame in which certain things can be thought about. Very tricky business always, and far beyond my personal horizon [<-- another one of those] for the most part. But very important I think.

Re collapse: This is perhaps also one of them in some respects. I did not mean it in a “zombie apocalypse” way. More in a (slow) “Fall of Rome” way, where after 200 years you’d start wondering if you’re sitting in Byzantium (which held up much longer) or Rome. Most of the time it is just relatively slow business, many long meetings that don’t get shit done, and broken upper management. In terms of such “toned down” future spotting there are two useful sentences that often appear useful to me:

“The future is already here, it is just not distributed evenly.” (i.e. you just rearrange existing stuff) and “The future comes from behind.” (i.e. you think you’re heading in a certain direction (mostly based on narrative) and are typically blind to developments that come from somewhere else (often (willfully ignored) fact based). There is a related one which is: “Walking backwards into the future.” In my opinion it gives society too much agency in where it is going, through I like the image of being somewhat able to extrapolate future developments from looking at the past. I think that is a good point to start, but my perception is that most of the time what is called “history” is a horribly, horribly skewed, spotty, far too high level write-up of things for the majority of which we don’t even have words yet (not to speak of better forms of communication), because we only seriously started talking about the past since yesterday or so. But I am rambling.

A funny thought though: What does it mean if we want to push collaboration, but then see us talking about autonomy? I think it is not mutually exclusive, but it is interesting none the less, no?

Can I do what I like without the need of making money?

I’d rephrase your sentence in “Can I do what I like without (the need of) making money?”. And I summon @elf_Pavlik.

Now @elf_Pavlik really needs to introduce himself to Romanians here. I wouldn’t do him justice.

Of course he is right, by many standards.

@Raluca_Marinescu re: maternal leave - you can get it even without a steady job, like with steady income as a freelancer for the last 9 months? even with a PFA (registered one person company or how you translate that…)?

True but with a catch

@Noemi I think you are right, you still get it, but the amount you receive depends on the income/salary. So the higher the income, the more money you receive for the maternal leave (though there’s also a limitation at some point) . I am not 100% sure so please correct me if I am wrong about this