I’m fairly new to this scene, having only developed a “social conscience” relatively recently.

Though my formal adult education focused on History and Irish language, the majority of my experience and skill comes from a background of entrepreneurship and business management.

I’m 25 now and I feel the time to take responsibility and become an active citizen is long overdue. However, unfortunately, this is not the mindset of the many Irish citizens at the moment. Apart from a select few controversial issues, there seems to be a general sense of apathy towards taking active roles in addressing our societal problems and creating a better future for Ireland. As far as I can see, this is mainly due to a combination of:

- inadequate political and sociological education, and a lack of cultivation of critical thought in our school system

While the distractions of modern life may live on, the group I work with “Grassroots Ireland” looks to tackle the other three issues.

We are a grassroots, community-led movement that aims to empower people to become active citizens through providing simplified education opportunities and resources on useful topics such as politics, sociology, law and economics, so that people can understand and begin to shape the systems that govern their lives.

This, along with the promotion of critical thought and positive mental and physical health, we believe, will naturally breed community development and social progress.

One project we are currently working on in this regard is direct/liquid democracy software that will act as a platform for debating, voting and also as a resource for relevant information and simplified summaries of existing and proposed legislation.

The plan is to spread the application nationwide in an open-source manner and generate enough interest and demand from the public that the government have no choice but to adopt it, or an improved form, voted on by the public.

In our society convenience is often considered to be king. If we make it as easier for people to educate themselves, develop well-informed opinions and give them a means of expressing those opinions, this will lead to increase in confidence, and a desire to participate in the democratic process.

Some other projects we are working on at the moment are:

- A community hub that will act as a café and safe physical space to build a community and active citizenry around, for educational talks, wellness classes of all kinds, meetings of community groups and just somewhere to encourage the discussion of important issues

While it would be great if we could release the direct democracy software and everything would sort itself, we are not banking on it. We realise that people can be skeptical of any kind of change and also reluctant to accept any more responsibility than they already have.

So, as a grassroots organisation first and foremost, we hope to use the above social enterprises to provide working alternative models on the ground in our communities to show them that there are better and fairer ways of doing things.

We believe that through social enterprises like the ones above, which are scaleable and replicable, we can work with and change the systems that exist from within. “Hack the system”, as they say. I’ve recently attended An Áit Eile’s pre-unMonastery event in Cregg Castle and see even more opportunities for positive change and connections between the many initiatives in Galway and beyond.

Hi @Eoghan, nice to meet you! We missed each other while I was in Galway this last spring… and I havent had the chance to hear about “Grassroots Ireland”. I understand you are based in Galway?

Is the liquid democracy application up somewhere, or have you tested it? I think you’re spot on to assume people will only use new democratic tools if they are convenient. I believe this to be true even for those already educated in civic participation, and more broadly this also stands for engagement with most technologies - especially given the broad offer.

Hi @Noemi, a pleasure to meet you too!

Yes you are correct, I’m based in Galway.

But, Grassroots has only been in operation since late Spring this year, so there wouldn’t have been much to hear at the time.

I hope you enjoyed your time in Galway.

The software development is in progress, but not yet ready to test.

I will keep you updated though and maybe you can tell me what you think?

Thank you for the encouragement, I agree that education alone isn’t enough.

On the role of conventions in human interaction

Hello @Eoghan , welcome from me too!

I am quite passionate about the idea of electronic democracy (well, actually I know more about electronically facilitated government, or even governance). I personally ran some government projects that used social software, and even wrote a book about this stuff. In fact, Edgeryders itself was born as one of those projects!

The main takeaway from my experience of several years is this: it’s not about the tech. The tech is important, of course, but it’s the culture that the community builds around using the tech that drives the process. One of the most remarkable guys who hangs out Edgeryders, @johncoate , used to work for The WELL, the world’s very first online community that was intentionally designed as such. He sent me a screenshot of the opening screen: 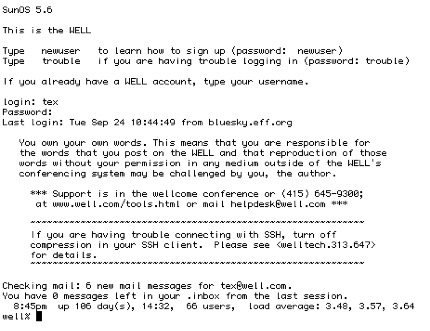 Convenience? Not by our standards. And yet, it flourished. What’s more, the different forums (“conferences”) had the exact same interface, but very different cultures. The parenting conference was caring and nurturing; the political conferences tended to be virtual places of aggression and shouting at each other. This story is narrated by @Howard_Rheingold in a fantastic book called The Virtual Community.

So, I think you are wise not to bank on the direct democracy software to sort everything out. In fact, I fear there is something in deliberation that erodes community… but this might just be me being too cautious. What are your experiences?

Thank you for the welcome and for your information and insight from your experience. It is much appreciated.

I must do some research, based on what you have outlined above.

I think you are right to point out that it’s not so much the tech/system/structure, but the spirit that animates it that is most important.

As such, our focus is on personal and community empowerment, through cultivating confidence and critical thought within people. The hope is that the majority of people are good natured and society will begin to balance itself naturally. The tech already being in place and widely distributed to speed up the process.

Good idea? What do you think?

What do I think? I am unsure about “naturally” in “society will begin to balance itself naturally”. It is critical that at least a few people step up and take it upon themselves to educate themselves and others at fruitful interaction. This needs to be done very early in the game. @johncoate likes to say that once a culture has set in a community, it’ almost impossible to dislodge it. And it is hard work, very.

But I think it’s the work that really matters, that really makes the difference. I have even been doing some work about designing “rules” for healthy, constructive human-to-human interaction. I call it Protocol, and it emerged in the context of the unMonastery prototype. If you are interested, here it is: https://edgeryders.eu/en/unmonastery/protocol-01-engineering-human-to-human-interaction-for

Two questions: how do I pronunce your name? And: can I ask you to re-load your avatar? Pictures instead of the default faceless man make our (now yours, too) site more attractive and personal.

@Alberto, totally agree that there must be “initial innovators” who take responsibility for cultivating said culture. By naturally, I just meant that the desire for change would (hopefully) come from the grassroots level, from the bottom up, rather than the usual attempts of governments to create change from the top down without any real public consultation.

I really enjoyed reading your piece on rules of human-to-human interaction. I love the idea of the open source do-ocracy and the comparison between the rule and Darwin’s laws.

As you said though, a lot of work ahead following such rules in a world that does not recognise them! A worthy cause nonetheless. Especially the idea of debate being a mutual search for truth rather than combat. (I may steal that line, if you don’t mind. Open source and all that…haha)

Answers to your questions:

Regarding the avatar, I have tried to change it, but each time I click, it just reloads the page in the same way. Any ideas?

My name: O-AN     (Gaelic can be difficult to get your head around!) Thank you for asking

I am glad you liked it, @Eoghan ! Steal away: when I say “open” I know what I am talking about, and I am aware of the consequences.

The desire for change… yes, in many cases it is there. But it can take adversarial, nasty forms. Right now, @Nadia is involved in organizing #alt33c3. Generous people chipped in, put in money and time, etc. They clearly meant well. But the process involved a lot of bickering about what, to me, looks like details: “you are using Slack! It’s no an open source tool! You must be corporatocrats!” In this case, this was deflected (and naysayers coopted) by the usual do-ocracy judo: “Ah, you’re right. How about you set the whole group up with a tool that everyone, including you, can live with? We are happy to shift, if you put in the work yourself!”. But this is a group of advanced doers, hacker ethics and hacker skills. It does not always work.

I will write you a private message re: the avatar.

Thank you for the help and the shared information.

I will use the stolen information wisely…

Hopefully will get a chance to work together in future!