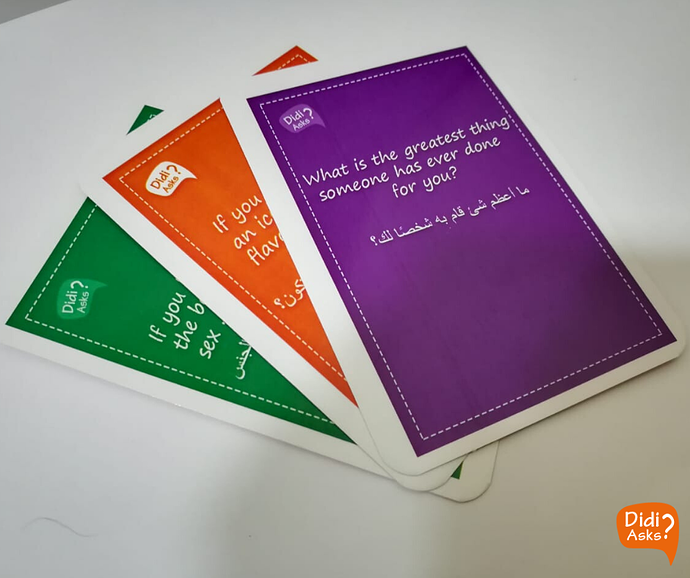 The busy environment of big cities like Cairo has influenced the social behavior so much that people stopped listening to each other besides the lack of opportunities to get to know new friends outside your circles.

Moreover, people now tend to stereotype and generate an easy image of each other based only on social media and not through deeper communication.

According to a survey from The Economist and the Kaiser Family Foundation (KFF), more than two in ten adults in the United States (22%) and the United Kingdom (23%) say they always or often feel lonely, lack companionship, or feel left out or isolated. Figures like these have been ubiquitous in the press lately, with alarming statistics about loneliness now accompanied by equally alarming warnings that it’s stunting our lives and outright killing us.

We noticed the lack of variety in party/adult games especially in Egypt that tackle the creation of meaningful conversation and social interaction.

Didi Asks is a card game to be upgraded into a mobile application that aims to enhance communication through a journey of questioning and sharing answers while motivated by the joy of playing.

We believe that this type of communication we implement by our game creates safe spaces for people to express themselves away from being judged, create an inclusive environment for strangers to make friends, provide a less tense atmosphere for daters (crushers) to know each other better.

It is a multiplayer game and it can be played by two only as we recommend using it in the dating phase.

The cards are as following:

2- Star cards: a set of privileges and actions to be performed by the players

3- Game instructions: to redirect the order of playing to keep the dynamics

The first version of Didi Asks Family cards was released in Cairo on 20th of November 2019 for social gatherings, dating and training icebreaks - It is available in Arabic and English. 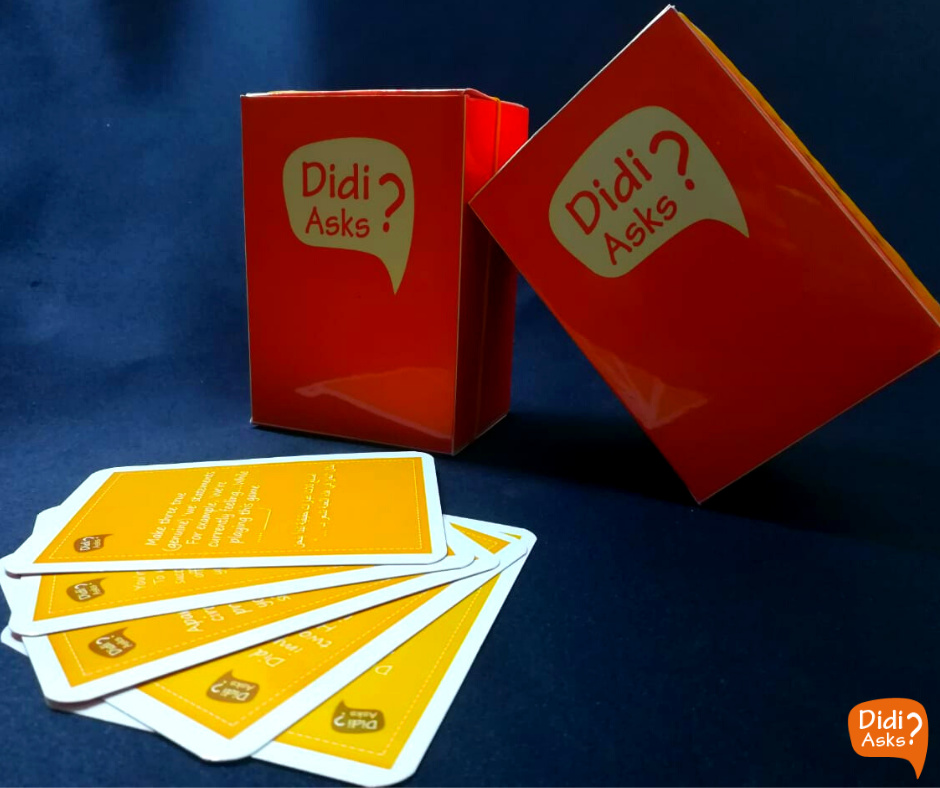 What kind of app version do you imagine for this? Just having virtual cards would be one way. Another way would be to also connect via these questions to other players who are somewhere else.

That second version sounds like a better (=question-moderated) version stranger chat services like Chatroulette an Omegle. These were well loved in the beginning but then (because they also included video feeds) people started to use them for unwanted sexual content

I just see that Omegle had something involving questions at some point … but just any question, not good questions … I mean, not your questions:

In 2011, the beta version of a new feature, “Spy Mode”, was introduced. In Spy (Question) Mode, users have two options: to be the “spy” and ask a question of two strangers, or to discuss a question with another stranger. As the spy, the user inputs any question for the two strangers to answer or discuss and is able to view the discussion as a third party, albeit without being able to contribute further to the conversation. The spy can quit at any time without ending the chat for the two other strangers. If a user chooses to discuss a question instead, as in normal text mode, the user is paired with another stranger and can discuss the question the spy has asked up until the point the other stranger decides to disconnect and/or move on to another question. (source)

cool, so App has more accessibility and responsibility.
to be honest i didn’t think about involving strangers at the beginning. I was thinking in two modules, first, self user experience and the second, online group that users know each other log or connected through a secret shared code.

Thank you @matthias for the info, it indeed revealed something I was not seeing at the beginning.

Very cool! This reminds me so much of the reflection card game by Holstee. Have you heard of it??
If I may, I would recommend working a bit on the card colors and design. The shade of colors in the first photo seems a bit too dark on the eyes and not very attractive.
Maybe you’ll find some inspiration here:

Holstee Reflection Cards are a fun way to spark meaningful conversations and deepen relationships with the people in your life. Every deck includes 100+ thought-provoking questions centered around mindful themes like Adventure, Creativity, and...

perhaps a good market could be found through healthcare practitioners or e.g via yoga studios?

they had desiged a mobile exhibition with physical pieces that the visitors could wear to experience what depression really means/ feels like. very clever.

thank you for your comment. yes someone introduced it to us during our testing phase but he himself stated the difference since holstee is more as cards/tool for interacting but we are very much a game

our main aim is people talk while being motivated by the joy of playing.

thanks nadia , actually we are planning on releasing specific version to be used for psychological counselling and so we will market through rehabs and life coaches etc.

Very cool. I used to go to a pub in Brussels on Wednesdays evening sometimes with a large group to play Dixit. I realised after being there 5-6 times that everyone just comes, plays and leaves directly after.
I proposed once we stay for a drink and 4-5 people stayed. Afterwards everyone was pleasantly surprised by the talk we had and thanked me for proposing it.
Your game reminded me of that example, party game but with more than just laughs in it…not that laughs are bad

this is nice, I hope you join Friday Call