Econ-scifi: can we imagine a completely different economic system?

Bristol is a very strange city.
It is amazingly wealthy in places (historic and new wealth) and was largely built on the back of the transatlantic slave trade during the 17th/18th Century. Over the years it decline and the power and prestige moved to cities nearby (Bath, specifically) but it experienced a renaissance in the 1960’s (largely as a result of immigration from the Caribbean) Becasue of the change in demographics it became a very cheap city to live in, and it attracted a large number of artists, performers and social activists to it between 1970-1990. There were some race riots during the 1980’s between settled Caribbean populations and poorer white communities. Mostly down to bad community management and racist policing tactics. This kept the more conservative elements in UK society away from the city, but attracted the revelotionary, bohemian and hippy fringe to the city. As a result the city now has 2 distinct sides: the old rich (University, banking, defence contracting) and the social activism/artistic exploration (Stoke Croft area, Banksy, Portishead (band) Dubstep (music genre))

The standard of living is split between the very rich (who often live in old 3-4 story townhouses, or outside the city), the general middle classes (who have larger properties around the city centre) and the poorer neighbourhoods (which are often a mix of long-term poorer white working class families and artists/social activists, etc) Overall the standard of living is very high, and it is known for being similar to areas of North London, but with a slower pace of life. A vibrant arts, performance, circus, music and festival scene can be found throughout the city.
The Alt-currency was created outside of the government structure, and therefore it started as a grassroots movement, embraced by the inhabitants and community before it was accepted by the government. Even now, i don’t think you can use the alt-currency to pay for any government services. Instead it is used as a way of keeping local money in the local environment (a bit like Disney dollars)
As with most of the UK, it isn’t about the government encouraging cooperatives, but rather just not being able to stop them or shut them down. Slowly, places like Bristol have seen community leaders and social activists make their way into the local government structures, which in turn leads to a faster acceptance and pace of change. But this is never top-down.

Hope that helps.
I’m not an expert on the city or it’s structures, but that is my take on what happened/is happening

The United Nations Development Programme is planning a large event around innovation is Istanbul, in early November 2018. To my great surprise, one of their officials asked me to bring the Econ-SF seminar to it, offering to contribute to organizing and paying for it.

After discussing it with @alex_levene, we have decided not to go for it. For several reasons: one is that it is too soon to do proper fundraising and organizing; another one is that we would like to freely develop the idea first, and only later, if at all, make it into some kind of product.

But this does raise some questions. Should Econ-SF become a series, rather than a one-off? Should we do many, instead of one? And where? And who with? What do people think?

I would do one and see how it goes, unless you have some high-level invitees who can’t make it to the first but could commit to a second.

Websites https://arablit.org/category/science-fiction/ Authors Muslim Science Fiction authors and also authors who have written about Islamic themes in Science Fiction. This list includes Muslim and Islamicate authors: Amal Al-Mohtar (Canada) Amal El-Mohtar is an Arab Canadian autor, poet and fiction writer. Her poetry has won the Rhysling award, and her fiction has appeared in Cabinet des Fées and Shimmer. While her primary focus is on the fantasy genre, she has also published in the Apex …

Is there any overlap between these people and the Econ SciFi? Because if so, then we may have a justifiable reason for engaging in the UNDP suggested event (but on a smaller, more exploratory scale) As i mentioned in the call, there’s probably a strong need for us to try to find more writers from non-western/non-english 1st language backgrounds. My gut feeling is that the ground may be more fertile there.

I don’t think so, Alex. The subset of SF that has any economic thinking at all is tiny. The Balkan-Middle Eastern sub-subset of that… I don’t know. Happy to change my mind if someone digs out some good title.

Hi @johncoate. Looks like everything is continuing with our plans for EconSciFi, with a event in the pipeline for Springtime 2019.
Is it possible to go back to Doctorow and see if this kind of timescale might coincide with any planned trips he has over to Europe.
We’re still really keen to have him as the centrepoint author for a larger event happening at this time.
We’d rather plan around his schedule than fix a set date now.

His response will then give us a scale for funding and development, as well as hopefully tell us exactly how much we will need to find to fund the event.

Is that something that can happen in the next couple of days?

I will write to him this morning and ask. Later this morning we are heading west from Denver for some days camping, but will try to get back to you as soon as I know anything.

That would be great, thanks John.
Have a great time in the mountains

Mail sent…but the auto reply says he is on holiday through July 14 and to write back then.

Ok, that’s fine.
Would you be able to resend when you come back from camping?

For a main event in Brussels, maybe a group you could look into is SwarmDynamics, recommended by Kate Genevieve. They are in the UK - London and Brighton, but also Brussels.

Apparently they are interested in a punk future that the artists can contribute to: http://swarmdynamics.org/site/radical-dreaming/

Trying to reach them anyways for culture work, so will keep you posted!

Alex, Cory replied to me and said that right now he does not have anything scheduled for Europe next spring, but he said he was honored that we want him to do this event with us. He asked his agent to keep an eye out for other gigs he might get there so it could be combined with Econ-SciFi, to which she replied that she would try to make that happen. So, nothing as of yet, but I think it looks promising.

Thanks John. Could you send me across the direct contacts for Cory and his agent?
I’m happy to take on the communications over this going forward. I’m going to go back to him with a suggestion for a date in Spring.

I can when I get to a place other than this campground so I can get the info off my laptop. I will get you the agents contact. I need to ask Cory first if he wants to get mail from someone he doesn’t know regarding a speaking gig.
I’m sure the agent would like some dates to work with. The sprit of it is they would likely be up for finding a combo of things in the area around the same time. But they don’t have anything right now. Underwriting him coming just for us and then go home to the LA area would cost retail for us I’m pretty sure because Cory is trying to lessen the traveling. But if some things could be combined that includes one or more paying gig then I think the picture looks brighter.

That’s brilliant, and would be the perfect outcome for us.
Knowing that he doesn’t already have commitments means we csn go ahead and set the date that suits us and the activity best anyway. We 're already kicking into production mode on this and we should be setting a date range pretty soon to go back to them.
I’m happy to just deal with the agent as a starting point until things are bit more progressed.
and no need to rush right now John, whenever you can

Hi guys, I thought this free online lecture (today! 1pm New York time) by Erik Bordeleau might be interesting for this group:
https://mailchi.mp/efbf695f869b/gcaslecture
Perhaps see you there!

Too short notice for me… but thanks @Caszimir!

I was there (Erik is a longtime close collaborator of mine). It was fascinating both because of the ideas Erik was sharing and also because the zoom got hacked by a troll and the whole thing had to be cut short as it became inoperable. I’m skyping with Erik later to reflect on it actually, provocative hack into a space that’s speculating on how to hack the system! Politics of visibility and accessibility abound… Erik did great in the circumstances… reminds me of Walkaway 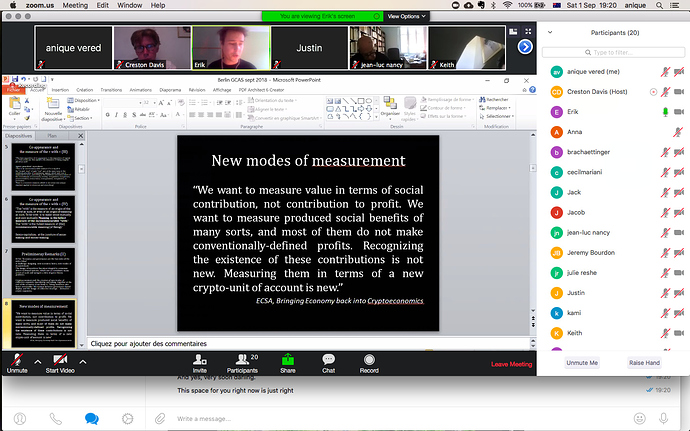 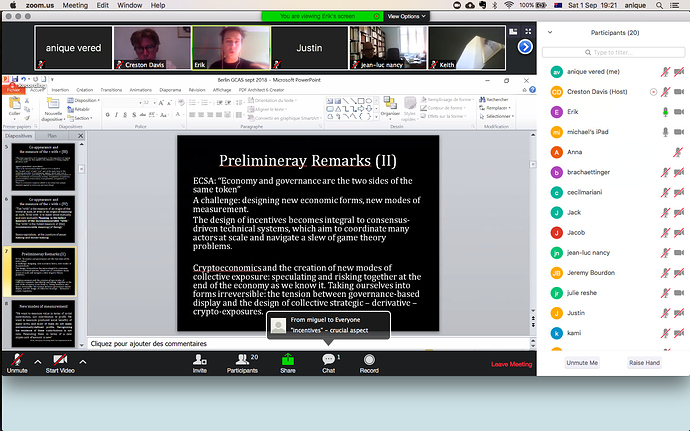 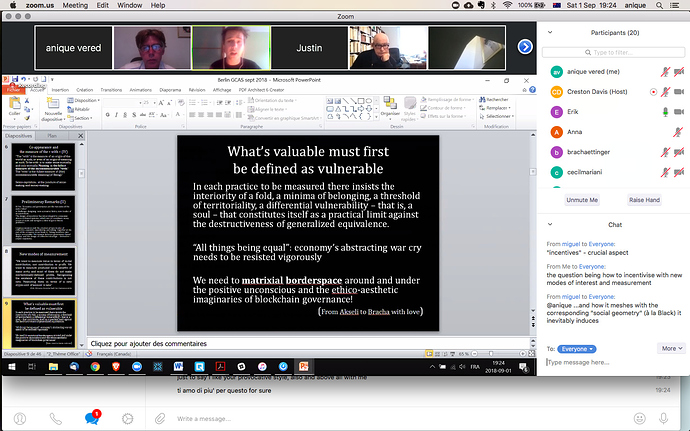 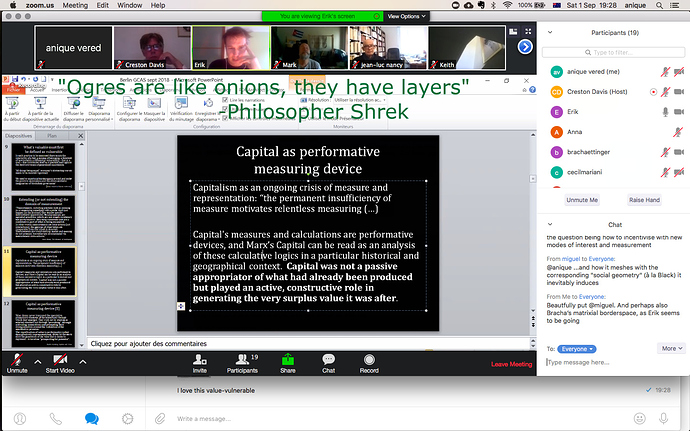 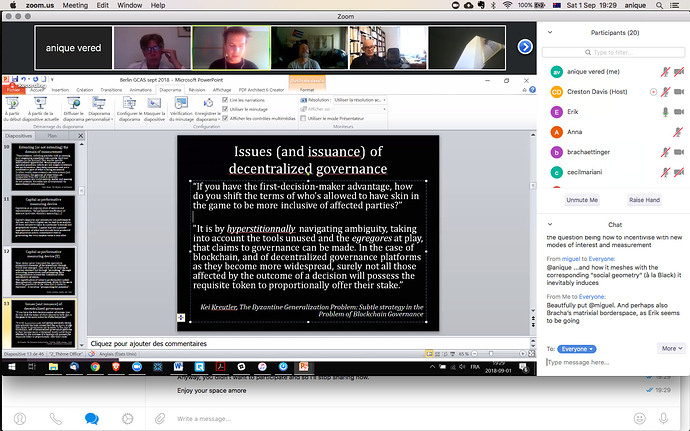