Ezio is a service designer, his main concern is to change the world – looking for regularities in the data to help him tweak the interaction environment to get more of what we want. He builds this taxonomy. On the other hand, anthropologists are concerned with describing the world. They weigh in the empirical evidence with as little hypothesis as they can get away with.

We are looking at a service design take on making an analytical tool (this taxonomy) which is very actionable. Can we validate this by coming at it independently? With 2 enthographical approaches: offline observation, and digital ethnography. To the extent that it is validated, it is immediately actionable to be used as a policy instrument.

Ezio: methodologies in design action-research are partly different from those of other disciplines.

Possible outlets for dissemination. Main conference in service design, Milan 2018, submission 2017; and a design journal (published in Brazil). The first submission would be more care-oriented; the second one more openness-oriented.

Guy: Why not map the ethno codes onto the matrix? You play the script I prepared for Federico, grab the tags as they pop-up and map them. I understood the replay would be articulated into phases (that’s how I read the matrix – as trajectories). The challenge is to identify the phases from the look (structure?) of the conversation thread (how it builds over time, and how tags are used to mark its content).

On coding and analysing interaction which leads to action: We were/are supposed to take 10 cases, read the posts/comments and analyse them.

Amelia: we use the codes to select which cases to analyse in more depth. So in Geneva we talked about using the code ‘connection made on site’ to filter which cases to analyse. Then we look at the other codes used in those cases (maybe mapping them in the way that Guy and Federico worked on). To figure out how talk turned in to action

The added layer is that we have Ezio’s matrix as a hypothesis to test. The positive is that even if the matrix doesn’t map on perfectly we can use the ethnographic analysis to augment it.

Federico: Amelia’s codes which map on Ezio’s matrix - and relevant for the Milano network are - 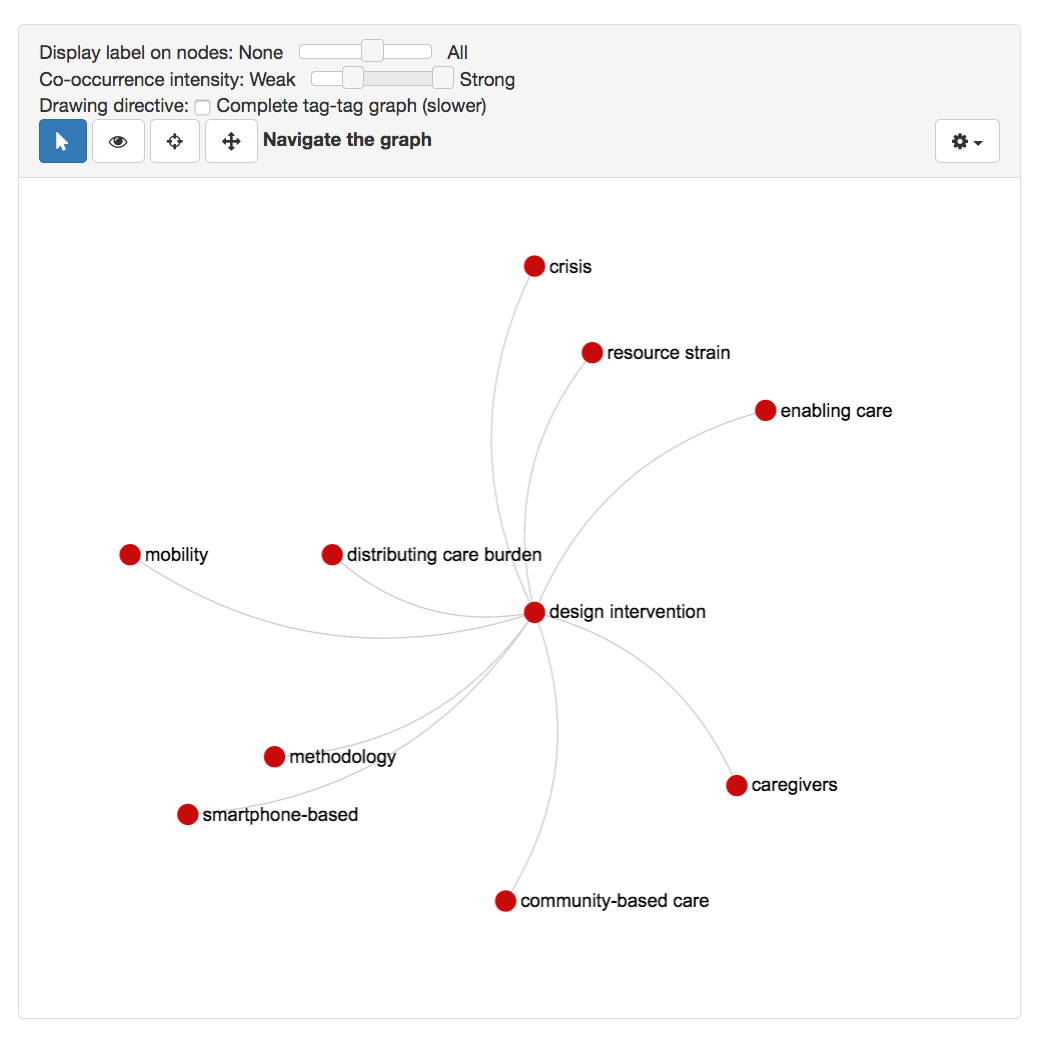 After today’s call we agreed to:

Where we left off is at these 10 cases. Now we got the list of urls for all the different posts with some references (in their comments mostly) to the tag ‘connection made on site’, courtesy of Jason! See first comment below.

To report on progress, see you all next Wednesday at 14:00 on skype.

So— we have 20 stories that include the “Connection Made on Site” code. Perfect, I think, for our purposes. I talked with Noemi this afternoon, and here is what we propose:

I’ve gone through the stories and grouped them into categories based on topic, and assigned them to the people in the group who I think will be most interested/have the most expertise.

Next step: everyone read the stories with these questions in mind:

Use your intuiton and take notes on your impressions of the stories. Think about them in relation to the larger Open Care dataset, and reflect upon whether they feel different in any meaningful way.

Next, use GraphRyder to guide your further analysis of the stories.

Let’s have the call tomorrow and discuss any questions or comments we have on this starting methodology. Since Federico can’t make it we can keep it short and really dive in to the proper discussion in a few weeks time once we’ve all had some time with our stories. Sound good?

If it can help…

I am not sure how familiar and at ease each of you is with Tulip (except Federico who is in the fast lane to become an expert), but very specific views of the whole communication graph could help a lot in this situation, especially with the pattern and recurrent user identifications.

I have compiled in this Tulip file subgraphs which are more refined than what GraphRyder can offer at the moment in term of filtered content. Basically, each topic is separated in a subgraph (so three for @Federico_Monaco and one for each of you) named according to @Amelia 's description. Just drag and drop the subgraph you are interested in into the visualisation, and voilà!

An example with trauma tour: 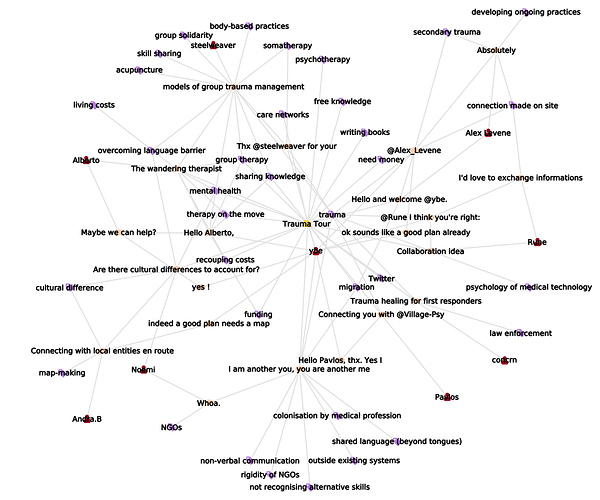 Thanks @Jason_Vallet always so helpful! But why do we see a mix of label types in the graph? Is that on purpose?

Yes, all the information is given together so one can see at the same time the posts, comments, authors and ethnographic codes.

For instance, in Trauma Tour (see above), the code connection made on site (top right) is used to annotate Absolutely, Alex_Levene and I’d love to exchange information. We can also see that the code secondary trauma was (only) used to annotate the first two comment.

Other than that, we can note that the comments models of group trauma management and I am another you, you are another me with the most codes (thus bringing a lot of ideas or concepts) are not truly generating long and elaborate discussions as one could expect (well, I would; note that I do not know the whole story but this seem like there is some missed opportunities in such cases).

And all that at a glance!

Very cool visualisation-- it’s great to see everything at once like this and for it to be legible. I’m sure we can use this to guide our analysis! So far we’ve been looking at the tag view of the platform as a whole, but I really think this paper is an opportunity to drill down into the individual stories like this to understand from the bottom-up how ideas crystallise and come into being as action.

A note on “reading” the links

@Noemi | @Amelia I just wanted to flag that, when you have different types of entities in the same graph, the interpretation of the link has to be factored back in. When we use the code co-occurrence graph, we know that every single link means “this code co-occurs somewhere with this other code”. So we can look at a global pattern of connectivity, where information flows transitively: “A co-occurs with B that co-occurs with C” Code C is still associated to A, though not as closely as B is.

When you move to these other type of networks, different links have different meanings: “A is author of B that encodes the code C”. It’s not immediately clear anymore what the relationship between author A and code C is. Could C represent an “interest” of A? Maybe. But there is no link that directly means “is-interested-in”. You could make one up, and induce a new network: but, in general, transitivity is lost.

Jason and Guy, they are not so invested in the interpretation as you are. Network scientists look at graphs as mathematical objects. They are fascinated as much by their intrinsic properties as by what they can tell us about the reality they describe. In fact, graph theory was invented as a pure math branch in the 18th century; only in the 1950s did Moreno and the sociometrists get the intuition of deploying it in the service of studying human relationships.

So: “ace” graphs, as Amelia says, but make sure you check, at each step, what each link actually means.

Connected story: worth including?

Hm, there is another story following the one on Cosmus: Backpacks for refugees: https://edgeryders.eu/node/6926

You probably didnt mark it connection made on site because this post was authored a week after the first - complementing same broad story.

It is there where the connection between Alex and Aravella unfolded too - with a clearer marker for action:

"2) Aravella: @Alex Levene when will you visit Greece? Let me know your plan so maybe I can help. (10 DEC)

Alex: I have sent you an email."

(at that point they mustve been in touch privately already)

Should I incorporate it into my analysis @Amelia ?

Other than that, I think the process you propose works as a first attempt! Also because you tell us how to work - first with the original content, then with GraphRyder. Thanks!!

Yeah, sounds good! I only marked the first connection, not any ongoing progress, so we’ll have to do that tracing work ourselves. (For example, the Open Insulin partnership continued but I did not continue to mark it “connection made on site”). For Open Insulin I’d use the tag “international collaboration” to isolate the continued collaboration. ( @Federico Monaco this might be useful info for you).

On Graph Ryder the merge isn’t showing up, but I’ve merged “international networks” and “international collaboration” so if both tags are there see both of them… will get that sorted out I hope.

Hi @noemi,
the links above about posts on edgeryders are not working anymore.
Is there a way to fix them?
Thank you.

Yes, @federico_monaco. Just add “legacy” as a third-level domain. Like this: https://edgeryders.eu/en/node/7850

The old site will be available at https://legacy.edgeryders.eu until the end of OpenCare, at least. It will be password protected, but @noemi will have a password for you.