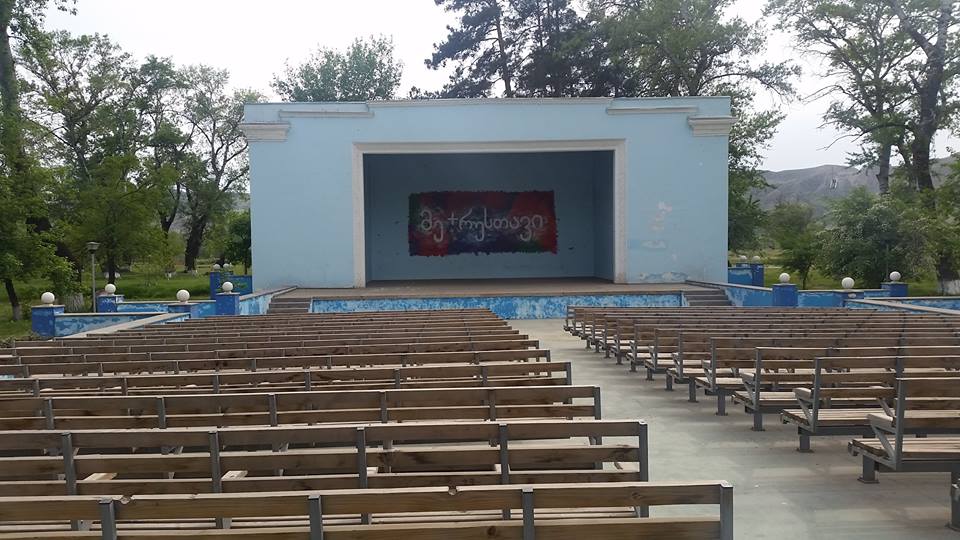 With her impressive curly hair and colorful shirt, Meri shyly explains she would like Rustavi to have more color, more street art. The city, divided into two parts by the river Mtkvari, suffers from the stereotypical soviet building block color grey. Especially on its “new” side, where the high rises orderly planned, reminiscent of what an uninformed outsider would think the whole post-soviet region looks like.

And Meri, a university student and part of the student governing body at Rustavi University Rvali, isn’t the only one during our first event in Rustavi, who believes the city of 120.000 is missing some color. The 12th graders we talk to at public school #4 also believe a more colorful city would make their hometown more exciting.

There’s a lot of ideas to create a city they wish for, they envision, they dream off. Nino, whose height does not compare with her courage to be the first to speak as 12th grader to a group of ‘old’ international english speakers, immediately says she wants a cinema. She is tired of going on a 40 minute trip to the capital Tbilisi to watch a movie. But it’s not just watching a movie, we learn from the others we talk to during the first day, it’s the experience. The popcorn, the cafes.

But the challenge, we learn during our later meeting with the youth department of city hall, isn’t that the government has not tried to set it up. “We organized an open air cinema, but no one showed up, and we even called people,” the head of the department explains us.

So, what would happen if we give the people with the ideas, the residents, the possibility to create and develop what they want themselves?Or as Livingstreets Pieter keeps reminding us: to have the government, as they agreed in Ghent with their project, to make nothing impossible.

And that opens the minds of the students and high schoolers we talk to.

What they wish for:

What visions they have:

What they are working on now:

I am looking forward to find out more on day 2 of our first Rustavi event. Especially to find out what people are working on already, and how we can support these initiatives.