How much CO2 is the Internet?

Adding a little bit of a personal experience from Timisoara, where we took part with @Noemi at Beyond the Obvious conference. 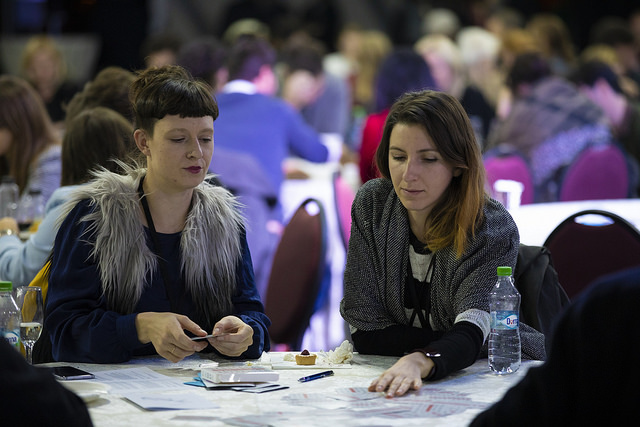 My favorite moment of the event was the speech and then a workshop (which turned out to be another, extended speech as we ran out of time) with Joana Moll who is a Barcelona/Berlin-based artist who investigates the ecological impact of The Internet. I never thought much about it, and the subject doesn’t seem to pop up even in the more liberal media, possibly because all of them are somehow complicit in the crime.

Joana explores the way Internet materializes and how the general idea of a “cloud” that magically connects people all over the world is successfully obscuring the actual size of the infrastructure that runs underground and oceans, occupies facilities the size of farms and involves kilometers of cables.

We are aware of certain risks and dangers that communication infrastructure poses to the Earth - in form of “rare” elements (which are not that rare, as it turns out: https://www.thermofisher.com/blog/mining/whats-so-rare-about-rare-earth-elements/) exploitation, horrible conditions of labor where that work is done, transportation of the items, maybe a little bit less about the toxic waste that extracting these rare materials and preparing them for actual use also involves. These are mostly connected to the physical devices we interact with - harder to pretend they don’t exist. And these are already huge, damning figures. But there’s so much more to it.

Some physical aspects of the Internet have consequences that seem to be poorly researched so far - Joana showed for example pictures of dead whales on the western shores of Europe who died a mysterious death some years ago - and which could be attributed to the impact that the trans-Atlantic cables have on the ecosystem.

There also doesn’t seem to be enough talk about political, post-colonial consequences of the location of facilities that “run” the show. Maps showing the concentration of servers and cables connecting the rest of the world together display a very obvious trend, where powerful cities and centers in the North-Western parts of the world pretty much own the whole thing.

Another mind-boggling part of her work is a real-life online piece that shows you how much CO2 did the Google emit since you entered her site. You can check it here http://www.janavirgin.com/CO2/.

I guess for me this was the strongest piece of her practice. Well, just read this:

Google.com is the most visited site on the Internet [6] and weighs nearly 2MB. The site processes an approximate average of 47000 requests every second [7], which represents an estimated amount of 500 kg of CO2 emissions per second.

For me, these are petrifying news. But when I asked what were her personal strategies to reduce her own impact, she said she didn’t have any. It made me think how pirate networks and files transferred from people more or less in person might be in fact one of the ways to improve the situation. It would also change a little bit the impersonal character of the connections we make with each other thanks to The Internet - forcing us to balance file-trade with some personal interaction like they do with the USB-stick sharing in Cuba.

It made me think how pirate networks and files transferred from people more or less in person might be in fact one of the ways to improve the situation.

Or like this solar-powered website? It’s offline when there is no sun and its battery runs out … very solarpunk

and it runs from a single-board computer very similar to a Raspberry Pi.

If I’d have to guess I’d say that 97% of all data traffic and CPU cycles involved in the Internet are not needed to transmit the content that is transmitted right now. It’s just due to inefficient programming and hosting, excessive demand for slick visuals etc. …

It made me think how pirate networks and files transferred from people more or less in person might be in fact one of the ways to improve the situation. I

If I’d have to guess I’d say that 97% of all data traffic and CPU cycles involved in the Internet are not needed to transmit the content that is transmitted right now. It’s just due to inefficient programming and hosting, excessive demand for slick visuals etc. …

Yes. Yesterday I was in a design sprint for The Good Lobby’s next project. Someone from Facebook was there, and he recommended “a motion element in everything you do”. So, for example, it is no longer enough to have a background image to your Facebook page; you should have a background video, or GIF, or something. The paradox: we were discussing a project meant to inform citizens, and prompt them to take action on doing things like appeals to the European Ombusdman, or launch European Citizen Initiatives. So, on the one hand you are requiring a super-high degree of civic spirit, motivation and idealism from people; on the other hand you are saying that they need shiny visuals to act. They are treated as philosopher-kings in one sentence, and as desire machines in the next one.

My main input to that session was “reflect on how online marketing has become the default metaphor for all types of human interaction”. This is driving the bloated, video-based Internet that we are seeing at least since 2010. Unfortunately, I do not see a road leading away from it.