In between Sense Camp and Edgeryders 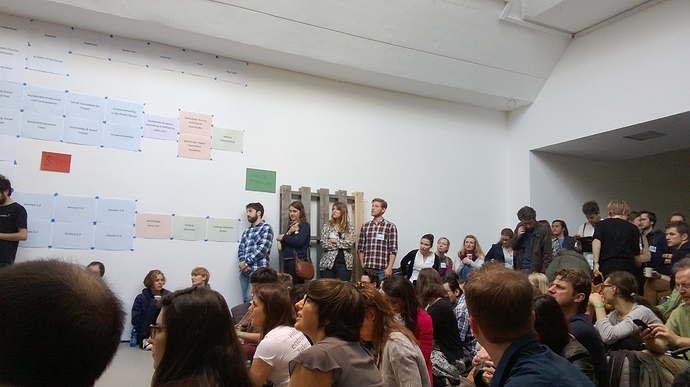 Hello future spotters !! I just wanted to say first that during this project I have been learning everyday from the STF team and participants and as @monarezk mentioned that nadia telling her to stop thinking and just do . I also wasn’t going to write this until nadia told me also

So while you guys (#futurespotters of Egypt) were having the 2nd day of the workshop in Cairo . I was attending another inspiring event here in Berlin called the “sense camp “ taking care of( social )business . so I thought sharing my thoughts with you on the 2 events would be beneficial for all of us especially for our Armenian Future spotters who are preparing for an event to inspire Armenians to find the work they really love and also for the final event in Tbilisi as I am sure its going to be a full interactive event .

- answering mails and facebook messages , I meet other people who were doing the same same role voluntarily for even more people in the sense camp event -taking a week of work to answer emails- working with passion for what they believe in . The same mentality  as edgeryders in general .

- then an interesting part which  is the bar camp planning where people could pitch for their ideas - and I had my first 30 seconds pitch ever about finding alternatives for formal education which wasn’t that successful :D- then sessions coordinated by the people who just pitched for their projects , finally a keynote speaker plus another unexpected speaker with some interactive activities during the day .

For me the informal talks I had with different people -from everywhere literally Turkey , Germany, Egypt , Belgium , France……and so on - these talks with like minded- yet so different - people  that tells you are not alone , you are not crazy and I think it is same reaction that people got from the workshops in the 3 countries.

I think I have been extremely lucky lately to be meeting online/offline a lot of really interesting passionate people - from technology geeks helping handicapped to people working with refugees-  and  I hope I can do the role of connecting them together so they can do more together.

- was hoping to meet @Dorotea as she was really helpful and supportive as all edgeryders really but sadly she couldn’t make it , met Elv pavilik but didn’t have a chance to have a talk with him

- for the alternatives for formal education I see that there are some people interested in that on edgeryders and I also know some people who are working on this , I really hope to push things forward in this topic

- from the interesting people I met was an Egyptian girl who was thinking about making a makesense like event in Egypt if someone is interested in that , still going to meet her hopefully in the coming days

Makesense is cool and they have an interesting approach. I know @elf Pavlik was very interested in the makesense scene and will be happy to see this post

Some other people you should meet while in Berlin: @Ela Kagel runs this cool space called Supermarkt (it’s easy to get to you take the U8 to a station beginning with B I think, dont remember name, check the website!) and is very engaged in various scenes building a really great community vibe in a previously run down part of the city. @Jay Cousins who is running a really cool project on Elephantine Island in Egypt is temporarily in Berlin. Do meet, I think you would both really enjoy it.

Also the lovely @Susa is in town and has been trying to get an initiative off the ground called sharing the city. Someone else you’ll want to meet is Julian Oliver, they run a critical engineering studio called Weise7 in Neukölln. OK I stop now

I formatted your post a bit so it works on different screens also mobiles. A tip, when you embed images make the width 100% and height auto, that way size automagically adapts to the screen viewer is reading from. Also you see the tags below? I added them using topics on the top right hand side of the editor, a left columt with orange headers…this makes it easier to search and find things we are interested in. I have been undisciplined about doing this myself and am now trying to get into the habit again

it seems there are alot of stuff in berlin

Thanks for the edit

there are a lot of interesting stuff going on here , I have been to the supermarket once for a talk before the sense camp