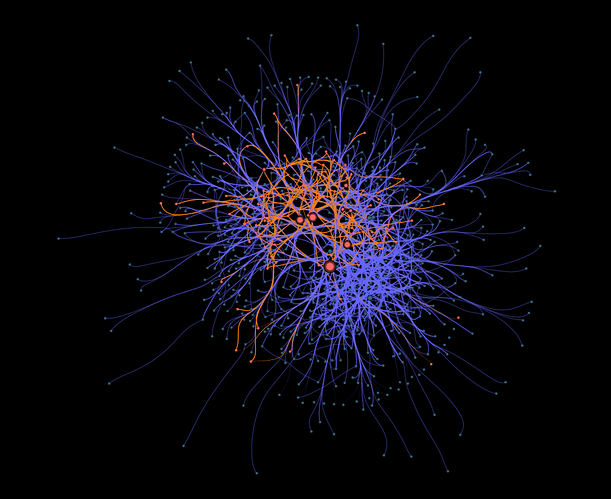 Straight from our netwizard @brenoust! You are looking at the conversation on stewardship that we developed in the runup to, during and after Living On The Edge 4 – The Stewardship, the 4th meetup of the Edgeryders global community. It is a network representation of the conversation on the Edgeryders platform: participants are represented as dots, and interactions across them (in the sense of leaving comments to each other) are represented as arcs. The orange-colored part of the network represents participants involved in the stewardship conversation, and their interaction in the context of that conversation.

The conversation on stewardship brought together edgeryders who are highly central in the conversation, as well as quite a few low-connectivity individual – many of them are probably newcomers, that got involved in Edgeryders because they are interested in this specific topic. The central position occupied by the main orange clusters signals that stewardship is quite close to the heart of Edgeryders as a community.

The visualization was created reusing data generated to produce an online ethnography of stewardship. Besides stewardship being interesting in its own right, doing an ethnography on it allowed us to test Open Ethnographer, a shiny new tool for online ethnography we developed for the Edgeryders platform. We acknowledge the support of the Rockefeller Foundation in building it, thank you guys! For an interactive visualization of the Edgeryders network (sans stewardship conversation), have a look at our Edgesense dashboard.