Methodological decision: what happens when a code occurs multiple times in the same post?

Hello @rebelethno, we have an interesting decision to make.

It can happen that a code is used multiple times to code the same post (in multiple annotations, of course). This is perfectly fine, of course, but it does mean we must make a choice when building the codes co-occurrence graph.

Imagine we have a post with four annotations. One uses the code catholic church, and the other three all use the same code, tradition. When building the graph, we can do two things. 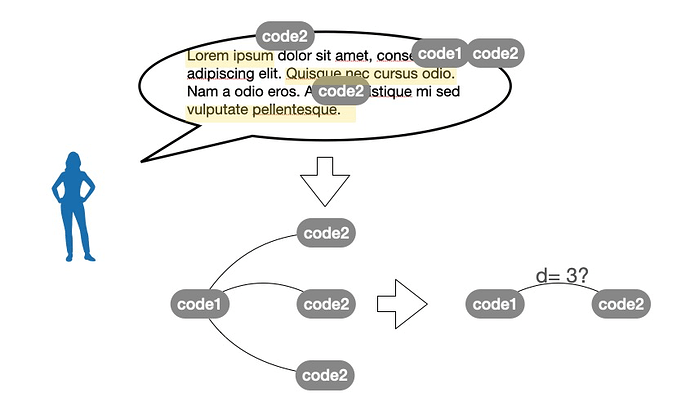 The second one is to consider that a post is a unit: the informant is expressing herself using a certain number of concepts, each encoded into a code. She may need to recall the same concept more than once as she writes (or speaks, if we are talking about a sub-unit of an interview), but that is just for the sake of the exposition. She does not mean to reiterate the importance of the repeated concept. In this case, the logic is to count an edge for each unique pair of codes used in the post. Our example post would have only one edge between catholic church and tradition .

Which one do you think is more appropriate?

This decision was made in today’s ethnographers’ meeting. We:

So, I do not think that it is worth it to keep track of both statistics. We do keep track of the “raw” number of co-occurrences (which we started to call association depth, denoted by d) and of the number of informants who have authored at least one contribution with each co-occurrence (which we started to call association breadth, denoted by b). These are positively but weakly correlated (~ 0.25), so they contain different information. They also are different in magnitude: at the time of writing, the maximum value for d in the POPREBEL corpus is 371, whereas the maximum value for b it is 13. The maximum value for unique number of contributions bearing that co-occurrence is 16, very close to b. However, high values are an exception: for both variables over 50% of the edges have value 1.