My Experience with Edgeryders

In September 2018, I have seen a post on the Edgeryders platform talking about a project called “Realities”. I’ve seen that this project is going to be build in many steps, and I’ve remarked that three hackathons will take place while building Realities.

After a while, I’ve seen a post saying that one of the hackathons will be in Medenine.
That post made my day !
I was extremely happy that an international event will take part in our small city in the south of Tunisia.

After the coordination with Yosser Belghith, CEO & Founder of OurGhema coworking space, the posters started to appear, and then the application form.
I tried my best to share them with students on Facebook groups and other social media, then I applyed.
Then I recieved the confirmation email ! That feeling

…
Let’s move to the 2 days hackathon to talk about, but first I have to talk about something else, @hugi who is as I know the Project Manager of Realities.

I want to tell you that first, I didn’t know this person, I know only that he is the Manager and the Director of the hackathon. I don’t know why I felt he’s a VERY STRICT person who behaves like a BOSS

. But those was the expectations

who has a very nice method to manage a group of people working together.

Let me tell you now about the weekend we’ve spent together in OurGhema…
Our hackathon started on Saturday, Nov the 17th at 9 AM. We met the team who were 7 developers from Medenine and 8 from other countries, who was our guests in Medenine, Tunisia. We got to know each other, then we started working.
By the way I went to sit for an exam by 10 AM

After knowing what we will be working on, we were divised in three teams, to work on a task for each. And we chose the task we’ll be working on ourselves.
I talked about the progress of the hackathon here So you can just click on the link and you can find out more about it.

I want to tell Hugi thank you for choosing Medenine as a destination for the first hackathon for this project. 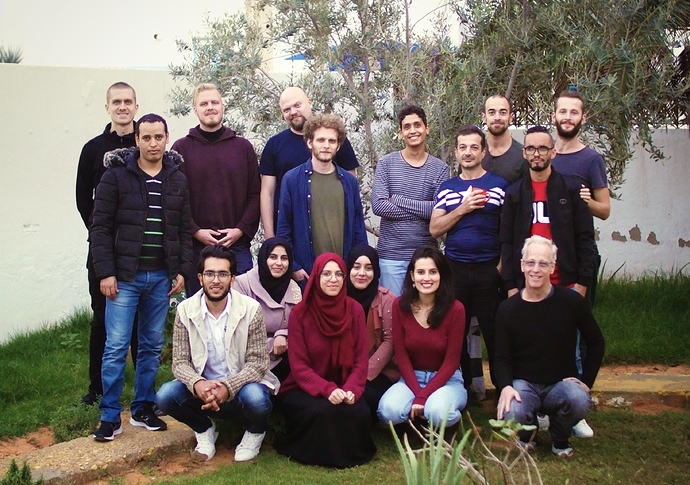 Thank you for joining us, as well as for your kind words. I’m glad that I was more easy going and friendly than I first appeared.

Hei @haykel, that’s so thoughtful of you towards Hugi and the team, thanks a lot, it means a lot to read for those of us following from a distance. I was in Medenine last year and looking forward to come back, and this energy of yours is very inviting, I have to say

Keep up the great work!!

looking forward to come back

Looking forward to see you in Medenine

who has a very nice method to manage a group of people working together.

Don’t be fooled by appearances! He can be a real slavemaster when he wants to.

It was great to meet you guys. Keep up the good work.

He can be a real slavemaster when he wants to.

Thank you so much Alberto, I’ll be waiting for Friday’s Lecture