The Edgeryders Team visit to Cairo revealed a strong belief in entrepreneurship as a cure-all for the countries ills. Within the context of a bloated and horribly under-delivering public sector, a private sector unable to absorb the continuous influx of Egypt’s youth bulge into the labor market entrepreneurship is seen as the concept most likely to generate job opportunities and achieve sustainable development on social and economic fronts. Many of our interview partners mentioned the Greek Campus in downtown Cairo as the epicentre of this budding scene.

2 years into the revolution savvy businessman Ahmed al-Alfi turned the former American University in Cairo’s former downtown campus - since moved to a desert suburb - into office spaces for tech-oriented companies and services in a wider drive towards an ecosystem of networked startups, incubators and multinationals.

I visited this heart of Egyptian startup capitalism with the intent of documenting a project worth knowing. A premeditated meeting with Tarek Taha, CEO of the Greek Campus quickly moved to an ad hoc conversation with Al-Alfy who pointed me to Nafham, an educational startup. The fact that I was interviewing Nafham’s co-founding COO Muhammad Habib just a couple of hours later is a testament to the speed and fluidity in which this space moves.

Mostafa Farahat, the startups co-founding general manager, gazed at two documentary cameras as he proceeded to promote Nafham and its newest line of educational videos. They depict Haitham Adly smoothly moving his calligraphy pen creating how-to videos of Arabic calligraphy, an elegant promotional ploy in touch with the advent of the yearly muslim holy month of fasting, Ramadan.

Nafham is an educational video platform that provides students with crowdsourced materials covering their official public curriculum. It is based around two pillars: Five to 15 minute educational videos and a lively Q&A section. The videos are a mix between those professionally created by Nafham’s own in house content team, those curated from all over the wider web and deemed relevant to cover parts of the curriculum, and a third group lovingly called Crowd-teach.

Crowd-teaching is the name for Nafham’s wider efforts to promote a crowd-based approach towards producing appealing and relevant video content.  Who can teach me better than those filling my exact same spot within the Egyptian rigid educational system, the logic seems to be. The efforts are multifaceted: The platform feels more like a competitive video game relying on points, badges, and scores to motivate contribution of videos and a minimum quality threshold of categorising, peer reviewing and proper citation of videos. Contributors are ranked on a competitive leader board that ultimately decides on the modest cash prizes Nafham contributes.

Nafham maintains its own outreach programme called Nafham Ambassador, where influencers promote the Nafham learning model, the values of volunteering and cooperation as well as contribute content. Said Mohammed Abeid was voted best ambassador for the 2014 school year, having created a working team of 5 members, a makeshift filming studio complete with green screen at his home and 94 contributed videos.

Some 500 users of the platform have so far contributed each at least one learning video, with the bulk even more concentrated amongst a handful few. Haitham is the biggest single contributor to the platform, having produced over 1000 videos himself, part of the continuously growing library currently reaching 23000 titles. Combined, these videos have gathered some 30 million views between an estimated 500’000 students. Habib believes this to be the entire market for students seeking online education in Egypt; or complete market saturation.

An ambitious claim, even though Nafham is the biggest player in town. Tahrir Academy works on a similar model: It has a more stringent model of what it accepts as video content, where only original videos are accepted, which in turn results in a smaller library, but with a higher average level of interaction with each piece of content. Videos are not as rigidly tied to the national curriculum and often cover general interest topics regarding the natural sciences, human sciences and technology.

In the World Economic Forum’s latest report on global competitiveness, Egypt dropped to  the bottom rank for quality of primary education. About a quarter of the population is illiterate, according to various sources. London think tank Chatham House estimates the government to spend just $129 on each students, or 2.5% what the United States spends. This matters, as 85% of Egyptians attend the public school system.

Yet, education is highly valued in Egypt. Parents compensate the abysmal system through private tutoring. Estimates value the private tutoring market as high as $2-3 billion a year. Perhaps the huge potential market explains the capitalist history of Nafham.

Nafham launched in 2012 at the Flat6labs for-profit business incubator, when optimism in the shaping the countries’ future was running on a post-revolutionary high. Al-Alfy, who is also CEO of Nafham, had been toying with the idea of an education startup, and introduced Farahat, an experienced marketeer to Habib, an experienced technologist. Both soon devoted themselves full-time to Nafham’s goal of accessible and scalable education. The platform is completely free for users to use and relies mainly on prize money and corporate sponsorships for revenue. In 2013, the team won a sizable cash prize from Samsung for having contributed a succesfull Nafham app to its Smart-TV app. Telecommunication companies see the potential of Nafham in increasing Internet penetration in Egypt: Potential users could end up spending 50EGP a month for a stable internet connection - a pre-requisite for using the otherwise free service - rather than for private tutoring.

There are plans to move towards more sustainable revenue streams in the long run. Early experimentation with new advertising streams and different sponsorship formats is underway, a delicate balance where the user experience of undistracted learning is the overreaching priority. There are no immediate plans for charging users. They key to sustainability seems in keeping costs low rather than expanding exponentially: All content is hosted for free on Youtube. The Nafham team has never exceeded 10 full time members, with the bulk of videos crowd-sourced.

Amidst the changing legal context of Egypt the firm changed its form of incorporation, leaving behind its limited liability partnership status in favour of registering as non-profit organisation in the United States, which operations, all of which are still based in Egypt, moving under the umbrella of a fully owned local subsidiary.

In 2013 Nafham was one of the first tenants of the Greek Campus. Negotiations were held with government officials on possible avenues of cooperation but little was realised. In the meantime, as crowd teaching started gaining momentum the firm started hosting some workshops where it teaches participants in the ambassador programme how to create high quality videos. In our conversation Habib describes a high energy level in Egyptian youth that is unmatched by skill: The desire to contribute is there. True digital startup ethos Nafham created a comprehensive knowledge bank of best practices in creating high quality learning material in its attempt to scale out its library. Potential contributors can use screen capturing software - which Nafham links too - to create lessons  mostly based on slide presentations. Nafham provides ready made templates for the Microsoft Powerpoint suite, each aesthetically designed for a particular topic such as Math or Science and complete with slides for citations and Creative Commons licensing. Another option is capturing video content similar to a TV presenter. Instructions show how to capture notes using the cameras integrated in smartphones. An entire section is devoted to video-editing.

While Haitham had finished drawing some beautiful arabic script, my discussion with Habib was slowly coming to end. His biggest challenge is in moving more people towards adopting online education, and sustaining the steady stream of volunteers for Nafhams peer-to-peer crowd teaching model. A moment later Farahat, Haitham and Habib were sitting around a common computer contemplating Nafhams newest video lesson. 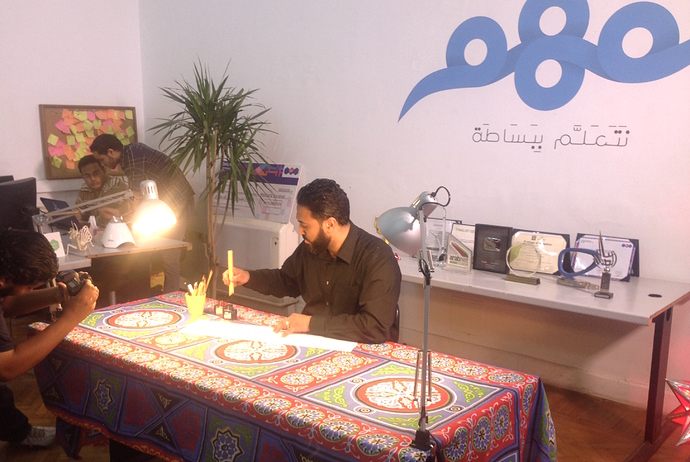 Edit 1: Added extra information regarding how the service was built, more details regarding its revenue and current stance of advertising, comparison to closest competitor, usage statistics, and deeper explanation of Nafham’s instructions for High Quality Material.

To honor the amount of work and attention you put into this I wanted to wait with feedback till I had done an interview of my own with @SamMuirhead in Berlin today. We shifted between talking about both his own project Open Source Circular Economy Days which is also involves a lot of pedagogy/education and more generally about the book project itself (Sam is a great storyteller and has made several of the Edgeryders videos including the one for LOTE4).

I think in order for it to really tick all the boxes we need to understand a little more about the work of building the service.

What do you think it is about Nafham that makes it attractive to advertisers and sponsors- do you know how many unique visitors per day they have and how large the community of active participants is?

Can you walk us through the instructions to would be contributors for creating high quality educational video material?

My guess is that Nafham is not alone in th online learning space in Egypt, and certainly not in the Arabic speaking worlds. What do you think makes them stand out and what do you think others can learn from their approach?

Thanks for the feedback, it is very helpful. I updated the text accordingly

was reading this piece on why video is dominating the e-learning MOOCs model. Although the article don’t provide much alternatives but asks for more research in this topic.

I am not sure if Moustafa is on the platform or not yet, but I would like to know more about the percentage of producing videos from the whole budget and what is the effect of crowd sourcing the material.

It seems that nafham also has an interactive platform not only videos I think this is a difference between nafham and tahrir academy ?

it is also advised to reduce the video production budget as it is the most expensive resource and also the very professional videos doesn’t add much to the learning process.( according to the same article)

another example that could be related to education/learning is the this guy (El Da7ee7 ) it is more of an egyptianized V-sauce youtube channel, that provides some scientific knowledge in a popular egyptian script.

what do you think, should we try to get him on board with an interview ? and see what kind of collaboration could happen, as he has a non-boring egyptian way which is at least better than boring talking heads in an educational video.

@Hazem This Medium article is very interesting. I agree with the author, the only MOOCs I took that worked where CS-related ones, where ultimately you learn from an assignment that can be corrected automatically and not from the Video material either.

Generally, I believe Video to be widespread as it is somewhat more engaging than textbooks, but far cheaper and easier to create than true interactive content a la CodeAcademy. Again, CS-related curricula seem easiest to create interactively.

I personally believe that math and statistics should also be thaught much more interactively; the guys from Setosa are doing some excellent stuff here. I had discussed this with Moustafa briefly at our interview.

The interactive part of Nafham - as with all other MOOC’s - ends at a user-run forum/Q&A section. This is not truly interactive, I believe.