New models for Covid19 recovery and the Green New Deal: A case study

Hi everyone, this is a first attempt to summarise the discussion from this event June 16: Resilient Livelihoods and Behavioural Adaptation to COVID

Thank you so much Daniel, Alberto, Josephine,Frank and Marina for your contributions!

As it turns out, ALOT.

Looking at the concept of resilient livelihoods - what it means to be safe?

We used to do economic development policy by adopting a unique idea of what a good society looks like and everyone is supposed to conform to that. Since we are now losing faith in this model, we should ask these peripheral regions to experiment different economic systems.

In the case of Messina, this seems to have come about by pioneering an approach resting on four elements:

Over the years and in part based on the culture of the founders, they were able to come up with practices that are self-evident to them, but counterintuitive to us. Another examples: they have assembled an art collection without buying any of the pieces. They acquired them all through donations or artist residencies. The collection is worth several millions now, and Guggenheim has tried to acquire it, but of course the foundation can never sell it without destroying the goodwill that made it possible to acquire it in the first place. That the collection cannot be sold does not mean it is worthless. It has value in two senses: as the embodiment of the relationship of mutual trust between the Foundation and artists, and as a collateral to roll out revenue-generating projects. The collection is valued not for its resell value, but for its potential to grow and catalyze more activities. You do not realize this value by cashing out on the asset, but by stewarding and growing it. This is a very different value theory from the one dominant in capitalism and neoclassical economics. It is an example of the kind of thinking that can emerge from mutual aid communities. This is where Edgeryders wants to be.

While seemingly simple and fairly easy to adopt these principles in other places, is is also easy to underestimate the complexity of local differences and embeddedness, local and regional inequalities.

"From my experience of working in the UK, not sure if the definition of wellbeing and safety is shared across different communities. For many safety and security is keeping people outside of the borders (brexit voters). There is a big risk that people are left behind in transformations, behind we are not listening to communities having strong cultural bonds. The situation is complex, there is not the same clarity for everyone.“

So what does this mean for institutional actors moving forward?

“I am wondering whether we could create access through the mutual support groups of sharing and caring communities? How do you expand on the Messina case? How to add on top of that transcontextual literacy in these already stand alone communities - through more flexible policy making (not waiting for the EU)? Climb the ladder bottom up and expand on it. The axes of sharing and caring communities could be the way to start. What would be the moto to use to find that intersection?”

Nora Bateson says that systems when they are stuck they don’t get unstuck if someone says it, but only if the systems learn together. Experience of creating transcontextuality - experiences with different identities, empathy, get the glimpse of the context of others, go beyond the polarisations and the idea of the democratic process. Lack of trust in society - part of the core things not working. Automatization of who we are. The idea of subsidiarity - top down, not bottom up and it is completely missing as well the dynamic ways of doing policies. We need a dynamic way of testing and designing policies and interventions. Locally driven and context dependent. Forget about the scalability.

A key aspect is that we are going to need to experiment new processes and models for working with movement building to get something to happen, and then protect its integrity for long enough that the desired results become visible. A process which embeds the means to strengthen the political/ideological movement that has supported and protected it.

An interesting example of what happens when you don’t manage to do this is the Finnish Basic Income experiment. A well thought through proposal originally came from progressive activism. but was co-opted by the political platform of the liberals which then executed it badly - ignoring fundamental elements. For example that you would need to give basic income to a sample of minimum 30,000 individuals (if I recall correctly) - and that the citizens to include should be selected randomly, and not just people on social welfare etc. Both conditions were not fulfilled. Also, it ran for less than half of the time estimate for the experiment to succeed in meeting its main target: it did not bring about significant employment effects (Demos Helsinki has published the full report here).

Compare this to the history of Folkhögskola ( Folk high schools), a nordic model for adult education and lifelong learning that has been around since 1844. The concept originally came from the Danish writer, poet, philosopher, and pastor N. F. S. Grundtvig. The folk high school movement was an act against a conservative ideal of both education and culture. At its core was an idea was to give the peasantry and other people from the lower echelons of society a higher educational level through personal inner development. It was born out of a reaction against the Enlightenment’s view of our mind as a fixed, rational machine as opposed to being embodied in the totality of our bodies and embedded in our culture. After the 1848 revolutions in Germany these ideas travelled to the Nordic countries where they were then adopted in the educational model pioneered by Grundtvig and contemporaries. Tomasz Maliszewski at the Polish Naval Academy gives a detailed account of the rich history of this institution in Sweden (T_Maliszewski-OntheHistoryofFolkHighSchoolsinSweden.pdf) .

One conclusion we draw is that we need to embed the idea of Citizen Engagement as community action on experimenting local development economic models, rather than as citizen-to-institution consultation.

Because the citizen-engagement-as-consultation mindset is not looking at the issue of power. Consulting citizens is one of those ideas that sound like a no-brainer, but it is very difficult to get the incentives aligned right for. It’s like experiments: the idea of policy experiments sounds great, but try proposing in a European forum “let’s have an experiment: revoke the copyright directive for Latvia”. You won’t get far, because the powerful people already have what they want. You can experiment only if you can override them, but if you could do that you could also attempt to establish an alternative policy anyway. With consultation it is the same. If the results of the consultation go against what powerful stakeholders want, the temptation to tell citizens “we have heard you, but we do not think we can go by what you recommend” is going to be too strong.

There could be a way out from this situation: invest time in the regional level because maybe you can allow citizens to hold real power, or experiment, if you go to a place that “doesn’t matter”. At the periphery of Europe’s economy, it is easier to get away with things. And indeed, Europe is swarming with mutant local economies (like this case in Catalonia). In practice we need to find new arenas where we can broker specific deals between communities and their local institutional and political actors around getting specific things off the ground. And create conditions for them to have staying power.

In Edgeryders we are exploring how we can spark and nurture similar dynamics between regional administrations, Political activists and groups running existing initiatives that embody different economic models. We explore how can we give enablers of a transition to a thriving future access to political power so they create the change needed? Can we shift the whole political landscape through tactical interventions and ecosystem building?

Welcome to our next event on October 8th during the European week of Regions and Cities. Deadline for registration is Sunday September 27th!

We will (1) discuss the challenges of citizen engagement; (2) discuss the role of data for and about collective intelligence; (3) present some experiences; and (4) discuss a possible future where different regions might pursue different models, rather than trying to converge on a dominant one. 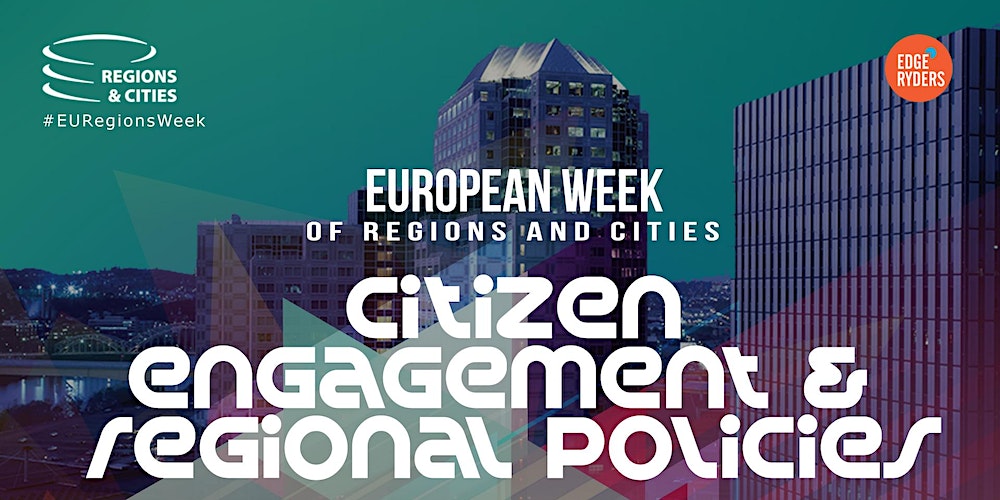 Citizen engagement is a powerful way to tap into collective intelligence. So why is it so hard to get people to participate?

This summary is from an event was part of the NGI Forward project Generation Internet (NGI) initiative, launched by the European Commission in the autumn of 2016. It received funding from the European Union’s Horizon 2020 research and innovation programme under grant agreement No. 825652 from 2019-2021.

This was brought to you by

another one to turn into an invitation to comment @MariaEuler…

Ok, do you have a concrete question that should be asked?

The reason why we were exploring this topic within the context of the Next Generation Internet is that because when we first spoke with Gaetano in Messina, one of the things we touched on was the alienation experienced by many communities wrt to the tech sector: “We allowed these (digital platforms) into our lives faster than we developed the collective cognitive capacity to direct/ control their destructive effects on communities”.

So it made sense to look at the underlying wiring of places where there had been some kind of successful rewiring of the local dynamics towards positive outcomes. As a setting for future discussions about how it makes sense to engage with tech topics and questions in pursuit of a next generation internet ecosystem that works for , well, humans.

@nadia don’t we have it here? What we can learn from Messina’s economic model?