Nextcloud as a possible IT infrastructure for The Reef: preliminary tests and thoughts

About The Reef and NextCloud

If The Reef is going to work at all, we will need to work together efficiently. The task at hand is large (a ~ 5M EUR real estate project), and the stakes are high (for most of us, the bulk of our savings past and future). We need a smooth workflow. Most of that is, of course, conventions and an effective working culture – which @Lee calls The Reef’s Way of Doing Things. But we also need an adequate digital infrastructure.

After asking @matthias, I resolved to invest some time in testing NextCloud. This is an on-demand digital infrastructure, similar in concept to Google’s GSuite or Microsoft Teams. Like these, it is available in several configurations, from the scale of one individual to that of a large organization. Unlike GSuite or Teams, it is based on open source software, and not tied to a single company, but offered by many companies, several of which are European and run their services out of server farms situated in the EU. I decided to subscribe to the free trial of a package called Private Cloud, as sold by tab.digital, a Latvian company which maintains servers in several EU countries. My own NextCloud instance is physically located in the Netherlands.

This service, in the most basic and cheapest version is sized right for The Reef. It offers:

All of this at 5 EUR /month, much more affordable than GSuite (60 EUR / month even in the “no frills” version purchased by Edgeryders). And, if we get tired of tab.digital, we can simply migrate to another company that offers the same service, which is of course impossible with Goog or Microsoft.

So I did some testing, and here are my preliminary conclusions.

Based on the document The Reef’s Way of Doing Things, our immediate needs are:

Let’s take them one by one.

This problem is comprehensively solved by Private Cloud. You can share folders and individual files; with individual users, with groups of users (eg @reeflings), or with the whole world via shareable link; allow or not upload into folders and editing of the files; password protect, etc.

This problem is comprehensively solved by Private Cloud, but with some minor shortcomings. PrivateCloud comes with two MS-Office functional equivalents, Collabora Online and OnlyOffice. They are architecturally different, and have small differences in the interfaces (comparison, though biased because written by the OnlyOffice guys).

From what I can see:

This problem is not immediately solved by Private Cloud. Discourse (the same software that Edgeryders runs on) is indeed avaliable from the app store in Private Cloud. But I am not so sure. Trying to install it returned the warning “this app can’t be installed because it makes the server unstable”. I could open a ticket, but not sure it’s worth it, frankly.

This problem is not immediately solved by Private Cloud. Private Cloud comes with a functioning chat out of the box. It works just like, say, Slack, or the Matrix. However, this only works on the laptop, not on the phone. So, no go I guess.

This problem is comprehensively solved by Private Cloud. It comes with calendar interface that looks exactly like any other calendar interface. More importantly, it uses the same standards for online calendars as everyone else. So, we could create a shared calendar for The Reef from within Private Cloud, and share it Reeflings, who could visualize it not just from Private Cloud, but also from their own Google Calendars or whatever.

For me it’s a go. “Good enough for now, safe enough to try”. Plus, cheap, easy to get out of, and easy to extend if we have more needs in the future.

However, I would keep the forum on Edgeryders, maybe asking the admins to give us our own top level category. I would also keep the Signal group.

Any observation from my fellow testers @Lee, @manuelpueyo and @matthias ?

Speaking as a relative outsider, that’s a glowing report.

Speaking as someone who is only here by way of app-device, mild caveat.

FYI, I have a nextcloud sitting on a server under my desk here: bibibibli.liquid-reign.com/
It’s mostly just to transfer music and films between devices in our household, and Talk doesn’t work cause I don’t know how to set up a TURN server… But with little extra effort you can go full independent with no monthly fee and just ocassionally update the repo upgrade…

The Nextcloud Version 23 looks very promising, hadn’t had the chance to use one yet though.

Thanks a lot @alberto!

I consider myself a digital analphabet, so I couldn’t say something meaningful about this to save my life I’m afraid. But as far as I can see it’s definitely “good enough for now and safe enough to try”.

Concerning the forum: I really like some of the features the Discourse platform offers, so if possible I would like to keep it some way or another. Ideally I would like to split it into two parts though: one for posts that contain information that can be valuable for people who are not part of the Reef, and another for day-to-day correspondence on not so interesting or practical issues. Do you think that would be possible?

Nextcloud talk has a discourse notification bridge, so the two should work together quite well. Just got to keep two browser tabs open…

Do you think that would be possible?

Nextcloud talk has a discourse notification bridge, so the two should work together quite well.

@OmaMorkie, I am afraid I don’t really understand this. How would it work?

@reeflings, I added a brief discussion on this to the agenda for our next meeting.

Nextcloud comes with a whole app store full of integrations with other open source projects, so you would have a widget on the Nextcloud homepage that shows you any notifications from discourse: 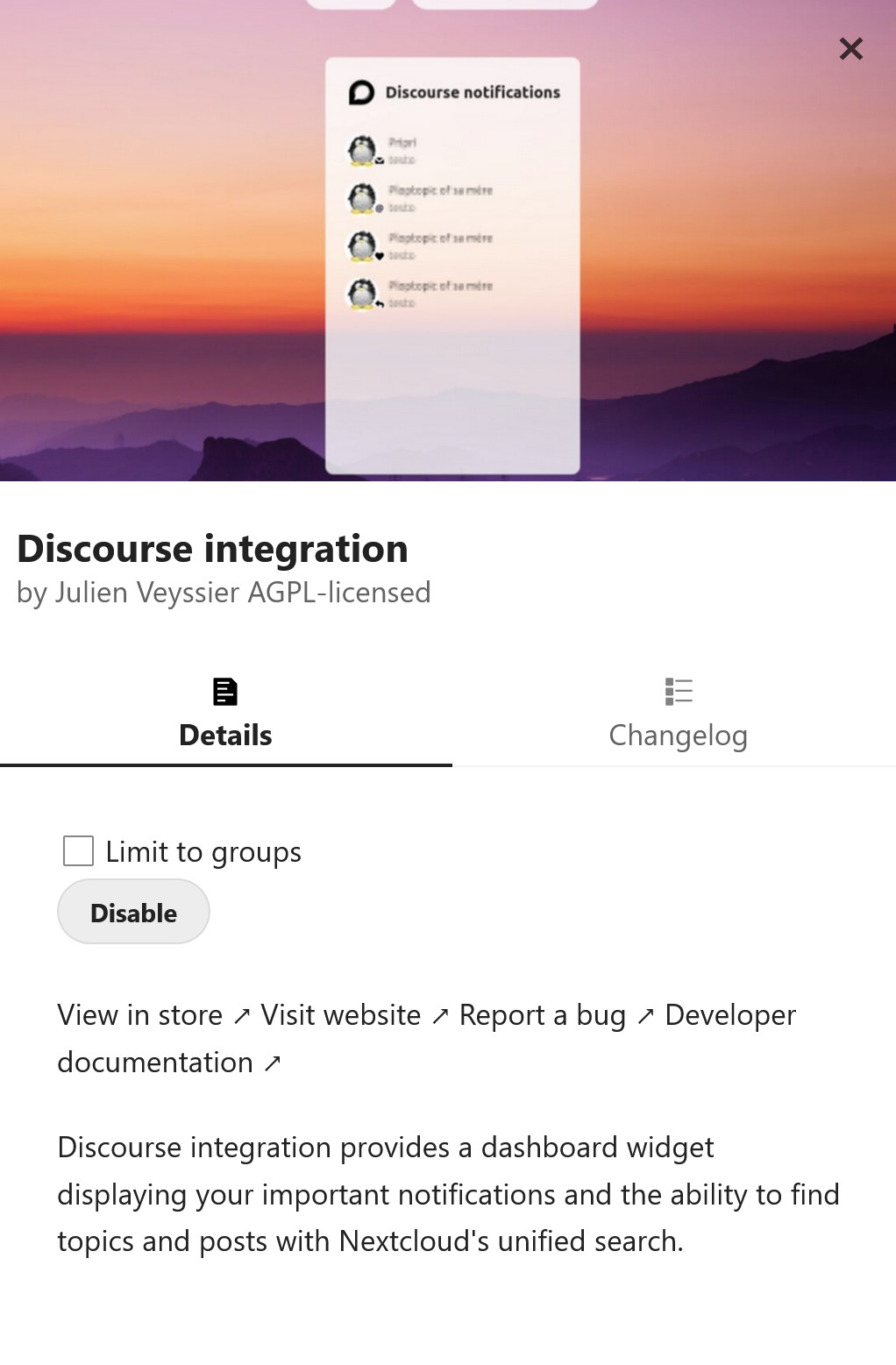 Speaking as someone who is only here by way of app-device, mild caveat.

Thom, what do you mean by that?

you would have a widget on the Nextcloud homepage that shows you any notifications from discourse:

Got it, nice to have,

Thanks for the detailed report Alberto. It’s definitely good enough to go and safe enough to try. It’s stands out from what 95% of projects do which is using Google and Microsoft. this has to be acknowledged and celebrated.

Forum and Chat are apps that are proably too big to be installed on top of nextcloud.
The way I did in order to have it all is to hire a VPS on contabo for 9 euro per month: this is a virtual computer. you can install everything on it
on that machine i installed cloudron a complete solution for installing web apps, i pay early adopter price 8 euro per month
once you have cloudron installed, you can very easily install apps on top: nextcloud, discourse, matrix, invoicing apps, wordpress, etc. you name it, there is even an app store
this whole setup was a solution suggested by @rmdes . it took me a while but now i am happy. I can manage new users, withouth paying any single cent, it’s mindblowing,

Thanks a lot @alberto for the Nextcloud exploration. Question from a non-techie: Do users of Nextcloud get Nextcloud email addresses or how does user authentification work?

hello Sabine, you can use your own existing email for authentication. no need to create a new one,

@alberto Alberto after out meeting yesterday, I am confused and I have the impression there is confusion about the reef IT infrastructure, should we sit down and talk about a plan?

Well, a test was done, but I don’t recall a decision to go ahead with NextCloud. @Lee says it’s all right, and I know what you think. But I have not heard from @Sabine_B_Frank and @Malcolm. If they agree, then yes, we can certainly talk about a plan.

I had read your analysis of Nextcloud (and asked a question). The topic (and decision about it) was to be on the agenda of a meeting, remember? If we are now taking this decision by way of this strand, then I’ll confirm that @Malcolm and I are OK with adopting it, but it seems to me that it could wait until we’ve had our 7th Feb meeting. It’s 6€ per month, right? We’d have to get on with paying a membership fee to the Reef asbl and opening a bank account.

I don’t remember discussing the topic in a formal meeting, it’s always a side chat. I think we should discuss it properly since this is our first piece of infrastructure, shower tech comes in reef.2

@OmaMorkie I hope you don’t mind if I take advantage of your knowledge of NextCloud. Do you know if there is a way to label the versions of a shared file? Or are we to fall back on editor name and date/time only?

@alberto It has a build-in file versioning tool, but I’ve never used it actively… https://docs.nextcloud.com/server/latest/user_manual/en/files/version_control.html

Yes, I had found it, but I cannot see a functionality for labeling the versions. No matter, I will ask the provider once we re-subscribe. Thanks anyway!

hello @alberto, i have created a test doc in my own instance of nextcloud, I am using an app that integrates with nextcloud called onlyoffice, can you check if this complies with naming your version requirements? test Nextcloud

I cannot even see the files revision history.

I think some permissions are missing.