On the Tunisian social entrepreneurship ecosystem

I spent some time reading different reports written on social entrepreneurship in the so called MENA region and here are some notes and thoughts about Tunisia that I wanted to share with you in order to discuss how to move forward.

As a person who is used to work from the bottom up, it is always useful to look from above and try to see a bit bigger picture.

The source of the date mentioned below about the no of mapped SEs and other case studies is this 2017 World Bank report.

With a booming civil society and enthusiastic youth trying to re-imagine their country after the 2011 revolution, social enterprises appears as a way to bring services to the marginalized and poor communities changing the model of charity to a model of revenue-generating enterprises; as usually youth tends to go beyond the normal widely adopted charitable model of aid.

so the SE scene is relatively new in Tunisia, Most of the SEs were initiated after “Arab spring” and the older ones are more or less 2 years older. In a report done by the world bank almost half of the mapped SEs ( 25 out of 51) are still at the ideation or early piloting stage, and only 7 % have scaled their operations.

There are lots of enthusiasm and the Social entrepreneurship model is being promoted by several entities and it is expanding, nevertheless there is no systematic data about it yet in Tunisia.

2. Who are the Social entrepreneurs

Most reports, with one exception mentioning that their sample was gender balanced, agree that the “recognized” social entrepreneur in the region is mainly young, male ( relatively more), and well educated ( holding a post secondary degree at least ).

This means that most of the “recognized” social entrepreneur fitting this profile can speak another language ( English or French ) and could be supported either by family or an institution, or in rare cases him/herself, to pursue a university degree.

I would argue that this needs to change, this profile doesn’t cover other people( like habiba for example ) and most probably the reason for fewer female entrepreneurs is that the supporting ecosystem that recognize the social entrepreneur caters for urban centers dwellers (source:wamda report) (Halabi, Kheir, & Cochrane, 2017)⁠ and it is more difficult for young women to relocate, it is relatively easier for their male peers.

During the past years different programs were initiated to support small and medium enterprises, whether with providing skills and trainings or micro-finance, still one of the main challenges is “access to finance”, Also “funding agencies note the lack of a strong pipeline of SEs that passed the early ideation and piloting stage and are fully operational” ; Return of investments is very low especially for the SEs targeting customers with a low paying capacity.

So Mainly SEs depend on international organizations ( GIZ, GIZ, AfDB, Oxfam, UNDP, AfD and the European Union ) for funding, Currently commercial and governmental sources exist but not easily accessible as the process “takes a lot of time and effort with uncertain results”

So the status quo for the funding for early stage SE ( ideation and pilot stages ) is :

The policies are not the best in Tunisia, but hopefully a new legislation is supposed to be applied soon that should ease the legal challenges in Tunisia. ( mentioned in the world bank report in 2017 and according to @Sofien-Dahem the law is not yet applied and expected may be by early 2019 ? )

The Figures below, from a comparative case study by the world bank group 2017 ) show 4 different SEs. 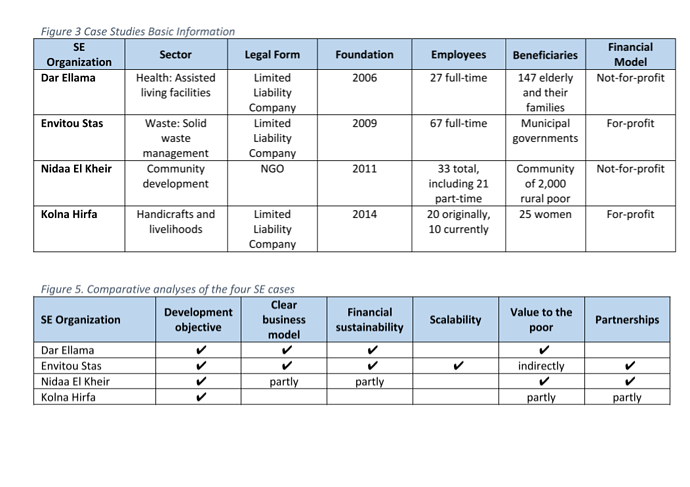 As shown only one was able to scale and it is a commercial waste management company started financially by the founder’s own savings and a small funding from a Finnish partner ( where she worked before, before this she was a secondary school teacher and got to know the semi-buried containers on a trip to Germany in 2006 ). “It is the only SE that has a growing revenue stream caters to the private sector as its customer.”

Kolna Herfa is an innovative handicraft social enterprise ( received a grant from the International Office of Migration, which funded the initial capital and operational expenses ) adopted a financial model where revenue is based on sales and 70 % of profit goes to the woman artisan and the rest for manager salaries and reinvested in the company. “However, sales have been declining,and Kolna Hirfa did not succeed in receiving commercial credits. Production has also declined as a result,and 60 percent of women associates left the company due to low profits.”

They trained 39 women and achieved “soft” benefits of course during the process, but the financial model couldn’t sustain the company financially.

5. Way forward as a community

As an outsider, it seems like that is getting better for the Tunisian youth, still a lot of work to do, the scene is expanding in most of the country and this offers a lot of opportunities but also we need to be careful not to slide into what could be called a neo-libral takeover for social entrepreneurship. ( as most probably this opportunities comes with the country applying a neoliberal agenda following the proper “development” path )

There are lots of training programs, business model workshops and so on, but still no proper way of (well documented) knowledge transfer.

Most of the reports mention having a community is essential for a healthy ecosystem which we can see happening everyday in edgeryders, there was a trial to start something like this in Tunisia but it didn’t catch up and I believe we have a good opportunity to build a solid community sharing beneficial practical knowledge in a local context )

So what we could do as an online community in order to move forward is:

That’s just the basics steps that could work on steady steps building a better ecosystem outside the focal points of the normal one, what do you guys think ? This are some outsiders notes but what do you guys on the ground think about this and how do you see yourself in this ?

quick update: the legislation situation is not going smoothly and in an un-participatory manner which is producing not very good results according to Jamaity

Social innovation is a risk-taking operation that requires imagination, perseverance and confidence to develop a creative idea of a product, service or a solution, and then implement a participative process and establish strong partnerships for its implementation and subsequent scaling-up. Social innovators are confronted with barriers that are often linked to an incompatible audit, regulatory culture and corruption.

(General) Reviews and evaluations of local programs (Coop, NGOs, GOs) have highlighted a number of obstacles to the development and mainstreaming of social innovations, including the traditional risk-averse and cautious organizational cultures of administrations, closed systems which favor single-issue solutions developed within clusters of organizations lacking mutual awareness, communication, networking and trust, fragmented capacities (resources, infrastructures and intermediaries) and skills (training, design tools, monitoring, validation and evaluation) preventing the development of a rich ‘eco-system’ for enabling social innovations, and insufficient stable, seamless and sustainable funding throughout all stages of the innovation cycle.

The issues of funding, governance, skills and measurement of social innovation are the most commonly raised. Tunisia’s finance systems are not well-suited to supporting social innovation. Furthermore, financing is a key issue at the different process development stages. The field of social innovation remains fragmented and there is a need for more developed networks as well as innovation intermediaries for brokering the connections needed to nurture and scale up social innovations.

Welcome from me too, @walid.abaidi. A question: what do you mean by “incompatible audit”?

Hey @hazem Thank you.
I’m a program Manager with the Tunisian Center for Social Entrepreneurship.
I was refering to a wider form of social innovation specialy the cooperation programs: a consortium of GOs, CSOs and Aid programs.

Hi @alberto, Thank you.
The lack or absence of third-party structures to measure, evaluate and monitor the social impact.

and there is a need for more developed networks as well as innovation intermediaries for brokering the connections needed to nurture and scale up social innovations.

This is where Edgeryders does its best work. Developing that network and brokering those connections is at the core of our work and is what we seek to grow in Tunisia. Your insight is much appreciated.

hey @walid.abaidi hope you had a nice Eid with the family.

when I was researching the social innovation in Tunisia, I found out about the Tunisian Center for Social Entrepreneurship, checked again and it seems that we are working along the same line somehow.

was wondering what happened to the taqamoul network, as a social network for social entrepreneurs, is the project closed ? is is still happening ? what are the lessons learned. would love to know more couldn’t find enough info online and the website is down or is it working via the facebook page.

as here as mentioned in the article the infrastructure for growing communities based on fruitful discussions is already available, will be nice to know your opinion and if you would like to make a collaboration between edgeryders and the Center in this sense.

Also in case you missed it, we are having the next community call with @Sofien-Dahem from Tunisia, join us if you have time.

Hello @hazem, I’m sorry for this very late reply. My mission with TCSE has come to end.
TCSE is playing a determinant role to enable and unlock social innovation ecosystem especially in the regions by implementing incubation cycles and establishing synergies of co-creation and collaboration around the most pressing social challenges through their social innovation spaces.
Here you can find some references of TCSE activities:
http://www.tcse.network/
http://lingare.org/


After my experience with TCSE, I founded an organization called K Innovation Hub that aims to to increase innovative, entrepreneurial and impact-driven activities in communities with high social movements by creating a collaborative ecosystem and pipelines that leverage economic opportunities needed to empower youth and put their ideas into action, thereby creating new companies, organizations, and jobs for inclusive, resilient and sustainable communities.


I was introduced to Edgeryders concept by a friend of mien @zmorda. And I believe that we share the same values. So I’m looking forward to fruitful collaboration for the systemic change
2 Likes