@rebelethno so are we meeting again tomorrow (3pm CET) as we said last week?

I am assuming so. I will be there (well, here). I really like the fact that our meetings have also this seminar portion/dimension. Last week’s was truly fascinating! Ciao.

Sorry, I won’t be able to make it but I’ll catch up with Jan.

I have an interview 2-245 my time but will try to join you after if you’re still going!

Hey @Jan @amelia and all, I cannot attend the ethnographer’s meeting today, as I’m still tied up in the Edgeryders retreat. If you could please answer the questions in here, that would help me with the analysis by language.

Join by Skype for Business

If you have any questions, please contact the Office of Information Technology Help Desk

We will. Have fun. Thanks for the heads up.

Hi @rebelethno. Following up on our today’s discussion about Facebook. I found out that 4 codings from our project are under the code “facebook” with mothers “digital media --> social media” (code 817). This is code from a different project (given the codings by amelia from 2016 and 2017). These annotations should be coded under our “Z - Institutions - Category --> Media” (code 3638). Unfortunately, I can’t recode the quotations with the proper “Facebook”-code, my pop-up list is not offering this code (only the different one). Can someone fix it? Zdenek 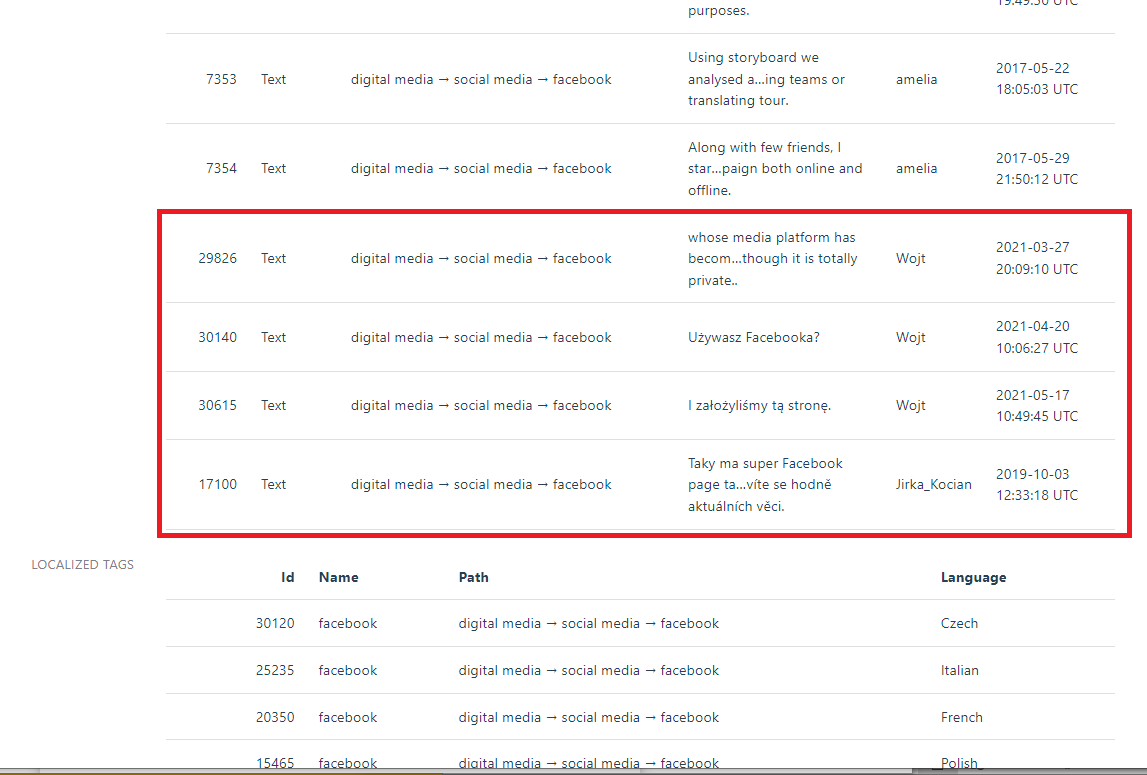 Hey @rebelethno, below is a transcript of today’s discussion:

• Getting hung up on categorising the codes correctly
-The standardized system of categories and codes must be finished by end of October – then we need to start coding.

• Coding: Y codes need to have a certain degree of specificity that is meaningful from the POV of our research objectives.
-Eg: names of populist politicians

• Relationship between media and the rise of populism
-basic distinction: old media vs. new media (within Y category)
-we have to go into the existing codes and fork them.
• Column W must disappear – there are few codes of @Jirka_Kocian 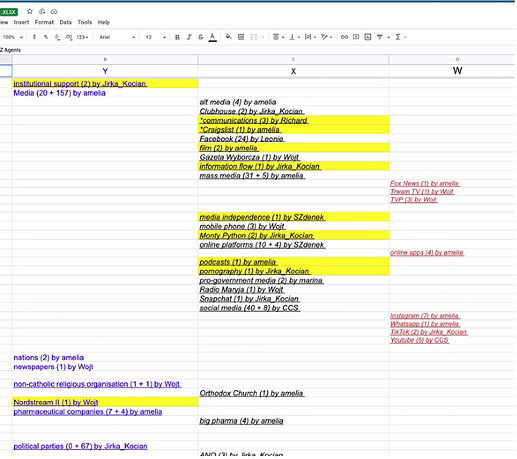 -Wojtek: they don’t need to vanish, we just need to figure out the way to move them to the left.
-they include important codes, we want to re-categorize them.

• Jan: the problem is not fully resolved; we still see all the codes that ER are doing.
-Social media will go into the new media – but we have to decide, whether they are important for our research.
-Do we want this information or not? WhatsApp, tiktok, Instagram – better to merge them into a singular category new social media…?
-Wojtek: introduce this division between old media and new media but in a more granular fashion. We do need examples.

Zdenek
-Media can be conceived of (coded) as a place where social relations, conflicts and actions happen.
Jitka
– the struggle for public media – in Czech this is central in the populist related debates.

Jan
-Media is such a central theme in our research – we have to pay careful attention to how and in what context it is used.
-We unfortunately do not have the ability to distinguish between two situations: one is that cooccurrence happened in the coded text or because cooccurrence happened because two codes were imposed on the same word.
-It would be great to be able to isolate this situation… @alberto
-2 words are co-coded…it disappears for the whole fragment of text, there is no distinction between whether it was coded on the same word or within the same text…

Zdenek
-When you say media you have 3 things – you can talk about media as social institution, as a technology/channel/environment or as content.
-In case someone says: “Twitter disallowed Trump’s account because they didn’t want people to be violent” – in this case they are talking about it as ‘institution’.
-When they say: “I have read on fb that Salvini is pushing against migrants” – they are talking about media as a ‘space’.
-The existing media codes would have to be recoded according to this division.

Jan
-Not sure if this would be practical – for the same reason that in the past we went into despair with other issues.
-e.g. Catholic church: it is an institution, at the same time it is organisation (church hiearches controlling reproductive rights)…in the text is it used as institution or as an organisation? Let’s drop it…

Zdenek
-Participative media (multidirectional, participatory) --> new media, where everyone can create content (so contrary to the old media).
-They are allowing interpersonal and group communication.
-Catholic church is a different case.

-The question of new media censorship – currently a crucial debate, relevant for our research.

Wojtek
-Zdenek’s distinction is ontologically sound.
-How important are these distinctions? I am trying to think of examples where this distinction would be necessary.

Jan
-What if we create a mother ‘fb’ and a child ‘fb censorship’ …in this way all the instances when fb censored someone will be recorded.
-At the same time, it will be included in all of the mentions. We have all the references to fb visible.
-Censorship as an institution. “Institution as anything which causes a constrain on human interactions.”

PROBLEMS – our biggest category and that’s the problem (ha).
-So many things that we study is driven by the fact that people are angry.
-They precieve the problem and they are talking about it.

Jan:
-What we will see in the visualisation is the edge between facebook and Babis, which in itself is significant.
-We will want to see the edges.

-Conspiracy theories that are so central to the workings of populism.
-Fact checking, being against fake news…
-We want to single out few of these media outlets – public TV crisis in Poland (National television) vs. TVN.
-What are those top particular important media in the Czech Republic (@jitka.kralova, @SZdenek, @Jirka_Kocian ), in Germany as well (@Richard, @Djan)
-We will implement the distinction between the old style and new media.

-WE WILL IMPLEMENT THE CHANGES IN THE SPREADSHEET

Many thanks @jitka.kralova for the wonderful minutes and @SZdenek for your interventions. Jitka: I will read it very carefully and may edit here and there (so we have everything from today in one place). I hope you do not mind.

Of course, this is a very raw ‘stream of consciousness’ transcript

Greetings from the afterlife, I was teaching the whole afternoon until 8, sorry for my non-participation today. As for the W level, “my” TikTok I see the following options:
a) upgrade it to X of its own within the current ontology --> in this case, the informant explicitly assesses TikTok as a platform and its role specific contexts relevant to her in comparison to other platforms
b) merg into any X of the above mentioned ideas (social media/Participative media) --> we do not care about the individual preferences, but approach the it as a genus defined by its functional aspects
c) create a new Y “Old media” and an Y “New media”, subordinate “TikTok” as an X to the latter --> it follows the logic of both @SZdenek and @Jan, it is important to our research, the distinction between the two by their fundamental properties (and possibly functions) is very clear and it allows us to generate other kinds of X relevant to the respective Y family (single-quoted ‘flame’, ‘hate’ etc…)

I vote for option c)
To verify the approach - a trick question, is “pornography” a proper X of Y “old media”:)?

I think this would not pass our ontological groundrules

What did you guys decide, @Jan?

Submitted my dissertation yesterday, so I’m back on the grid! Thank you all for your patience

Hey Jirka. I would distinguish (A) “pornography” as consumption of media content (such as photos, videos) - then code in Y media, and (B) “doing pornography” as (participative