Hi everyone, we are in the process of writing a series of articles synthesising the insights from the event, against the backdrop of what we have learned from our 3 year consultation (the full report is a circa 100 pages long).

I’m posting below an overview in the form of a “map” followed by short explanations. Each section = an article where we summarise what we have learned about that specific topic or question.

This is really challenging, and Im at the edge of my brain capacity/ knowledge so any input welcome. 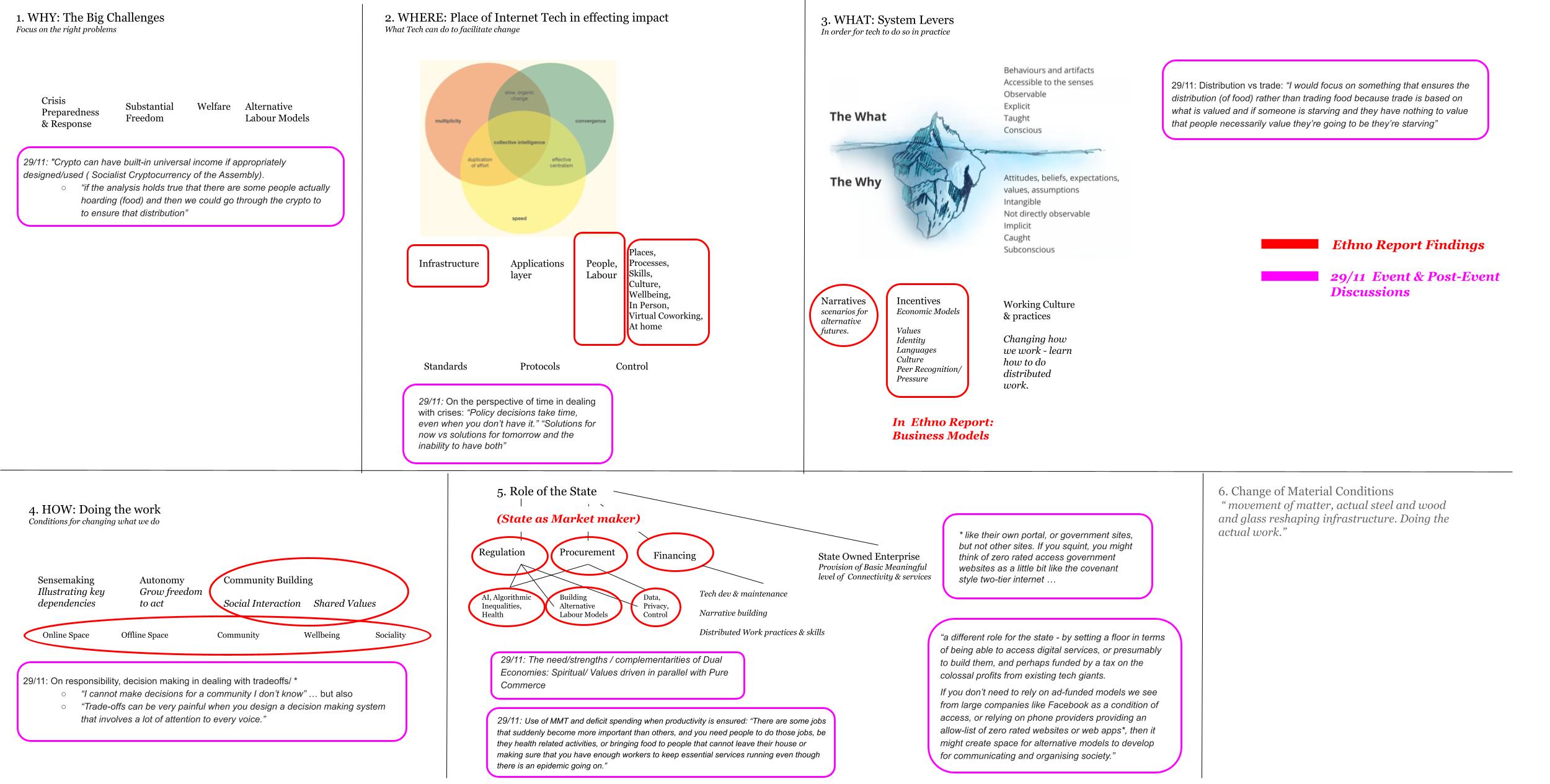 These cannot be fixed by any one actor alone and certainly not with "there’s an app for that’ - however they are currently being adversely affected by choices made by technologists and institutional actors.

Findings of European Environmental Agency + OECD = Way forward is first we rethink economic models. And then look at role of tech within these models.

2. Role of technology: Seeing through the hype.

Technologists and policymakers can make a big difference if we

3. Creating conditions for change: Seeing where focused efforts can unblock obstacles to change

Our ability to make different choices is constrained by a number of factors - many of which we are not aware of, do not consider to be part of our tech-related work, or feel insurmountable/ out of our control. How to approach/ relate to this?

4. Actionable-right-now Improvements at level of individuals, teams and organisations

These were identified as fundamental to affecting real change. And can be tackled by different people in different contexts also because they improve our own professional and personal lives in a direct way.

5. What Institutional actors can do

These are recommendations for what people working around or in public administrations and political movements can/should push for.

Seems to be missing the State Owned Enterprise - running a utility is more than Regulation, Procurement and Financing. Thinking of “Operation and Maintenance” of Infrastructure or something along those lines. NHS would also fall under that.

5. What Institutional actors can do

These are recommendations for what people working around or in public administrations and political movements can/should push for.

→ I miss a “6. Change of Material Conditions - movement of matter, actual steel and wood and glass reshaping infrastructure. Doing the actual work.”

There’s one thing that strikes me from playing Witness, seeing the map, but also seeing how I’m seeing discourse develop around the role of the internet in society.

The idea of a universal basic income is not all that new, but the idea of universal access to a basic, meaningful level of service provision, as a mechanism for unlocking human potential, economic growth, and various other things we might think of as good things, is a thing I’ve seen shared more and more now.

One example is this idea here to make sure basically everyone has access to a level of connectivity here - generally seen as a good thing for everyone (albeit from an org called the alliance for affordable internet - of course they’d like this!)

We have meaningful connectivity when we can use the internet every day using an appropriate device with enough data and a fast connection.

Once you start thinking of the internet in utility terms, then it opens the door for loads of interesting thinking like this paper summarised in this thread on twitter.

Our new paper out today 👇📢 https://t.co/EDF9tL2H5V: Ever thought “Wouldn’t it be good if we could all get a basic amount of free renewable electricity and public transport? Turns out this would significantly reduce emissions, be redistributive and reduce energy poverty”

The paper is largely about how to equitably tax carbon emissions in society, and then make sure the dividends go towards effective service provision that ensures lower emissions, as well as avoiding the regressive impacts of carbon taxes. Right now, taxes on car transport and energy can disproportionately impact people in low incomes, as they pay more as a percentage of their income on these things.

The same often holds true online - the poorer you are, the more you end up paying on connectivity/information services as a share of your income.

I think a bunch of this thinking could plausibly go toward the idea of providing a meaningful minimum level of connectivity to allow for engaging digitally as a member of society, available to everyone.

In the context of this research, I think it presents a different role for the state - by setting a floor in terms of being able to access digital services, or presumably to build them, and perhaps funded by a tax on the colossal profits from existing tech giants.

If you don’t need to rely on ad-funded models we see from large companies like Facebook as a condition of access, or relying on phone providers providing an allow-list of zero rated websites or web apps*, then it might create space for alternative models to develop for communicating and organising society.

There’s still a role for use of tech building new services, all the taxable economic activity implied, but you at least have a floor of meaningful access.

Anyway I hope this didn’t hijack the thread too much.

* like their own portal, or government sites, but not other sites. If you squint, you might think of zero rated access government websites as a little bit like the covenant style two-tier internet but i might be reading too much into Witness here…

The same often holds true online - the poorer you are, the more you end up paying on connectivity/information services as a share of your income.

yes to this and even more - besides internet - this holds true globally, global south you pay more for same goods and services than in the west, for the same clothes, sports membership, same level education, not just in percentage but in absolutes. Shitty internet (but best you can get) in Kenya costs $200 a month for example.

Not sure how I am contributing to this conversation, but it’s been such a frustration of mine as most people don’t seem to grasp it. And not sure how to beat this on a global level, tho see your point re state-level.

have updated the map to include input from @OmaMorkie and @mrchrisadams

I wonder how does the European Commission, as a major force of regulative pressure, fit into the picture given that it affects behavior not just in EU states? (Thinking of how GDPR is forcing even US companies and states to change.) And how do consumers and non-profit organizations pushing for change fit in?

When thinking about system levels, I keep returning to this article by Donella Meadows; maybe it could be a useful starting point to categorize interventions?