So, did we get to know each other?

The workshop of June 12th was called “Get to know each other”. We imagined it as the very first step in the process of learning more about our fellow @reeflings; skills, passions, drives, anxieties. And we do need to know: we are about to start a big, scary, exciting project together. To do that, we need to learn to work together. Just as importantly, we need to learn to trust each other. Even with the best decision making techniques available, deciding as a group means that each of us, occasionally, will walk down a pathway advocated mostly by the others. I am fine with this, because I firmly believe that no one (and certainly not I!) is smarter than everybody… in theory. In practice, I find it much easier to join in the vision of others if I know and respect those others. I don’t see a way to pull off building a cohousing without smart, compassionate, committed, hardworking partners.

Granted, a one-day workshop is not enough to get to know someone. This was always the case, and frankly I expected that the 12th June workshop would happen with a smaller group of 10-15 (including the four founding members + Ada), not with 22! And yet, despite the obvious limitations, some tentative learning did happen, at least for me. Here’s my takeaways points:

All in all, a very promising first step for me. What about the others? Did you get to know the group, and the people in it?

Thanks a lot for sharing and documenting this @alberto!

If the question is “Did you get to know the group, and the people in it?” for me the answer is probably “not as much as wanted to”. In my case that’s of course something that was to be expected: hosting and facilitating a workshop requires a lot of energy and focus, which doesn’t leave much energy left for some more in-depth contacts.

On top of that I am also an easily-overwhelmed-introvert-at-heart (four is crowd to me), so even if I wouldn’t have been the facilitator, I am very sure I would still have struggled. Based on a couple of conversations I had with some people I know I am not alone in that, so I am going to turn that into an invitation to all @reeflings: my personal preference for getting to know somebody is a one-on-one meetup, over a cup of coffee or taking a walk (or whatever), so if you are up to that, please feel welcome to let me know.

That being said of course I don’t want to sound like I think it was a total fail. On the contrary: given the number of participants I think the objective of the day was mostly to create an atmosphere of openness, acceptance and collaboration and I think we succeeded at that rather well.

Personally I felt amazed and grateful at every activity that we did: there was this vibe in the air that made it feel so natural to me. It’s a feeling I hope I’ll manage to hold on to for a long time to come. Below is a picture that visualises one of these moments. People were enjoying the delicious lunch prepared by @manuelpueyo and @ugne in the garden, and everybody seemed very relaxed. Thanks once more to everybody for making this happen! 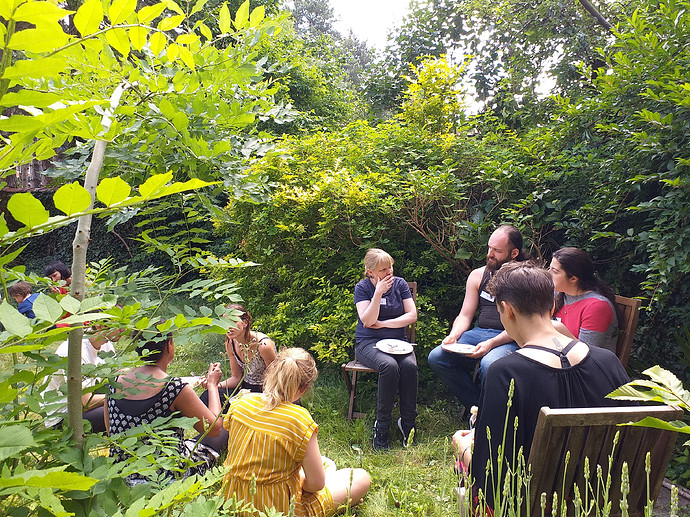 I sure met a lot of people. Knowing them is still a far shot, though

But all in all a very good feeling of being amongst like-minded people when it comes to core values. 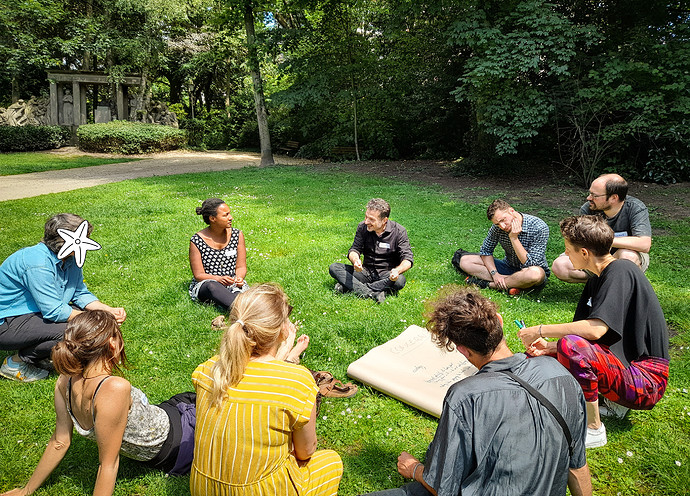