So our own tool for monitoring the Edgeryders community over time is up and running! It’s called Edgesense and it’s a Drupal module for social network analysis build by no others than @Alberto, @Luca Mearelli and the Wikitalia team. It runs on the Edgeryders database starting 2012 to date, and returns results in the form of network visualisations –weekly captures of the network shape.

So I started by going to http://edgeryders.edgesense.spazidigitali.com/

The first thing you see is the slider to navigate the timeline of Edgeryders from its beginning – so two and a half years of network evolution. Click on the Lock red icon to enable zoom-and-drag on the network and untick the moderators box if you want to remove them from the network. 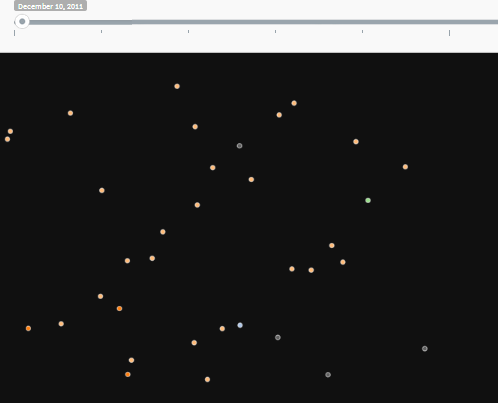 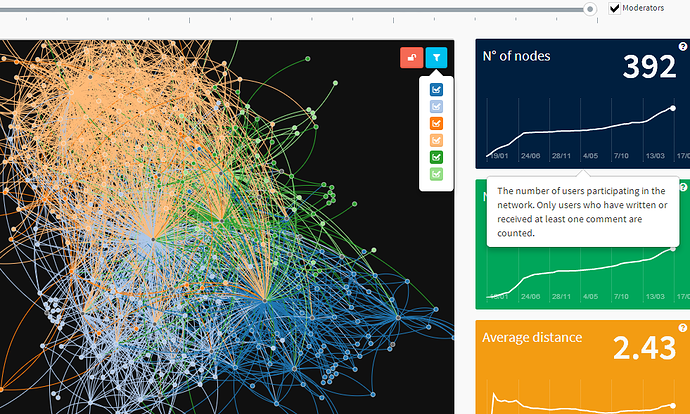 On the right you immediately see the key network terms helping you understand what you’re looking at, with explanations available under the ? icons: Nodes are active users in the network. Edges are relationships between users, counted both when user A comments user B and viceversa. Edgeryders had 1200 registered users at the end of 2012, but only 260 active ones in the sense that they have written or received at least a comment. Today we have over 2000 registered and 400 active, so an average of 20% engaged, which is not at all bad for an online network.

The colors you see mark the emergent subcommunities – groups of people connected to each other more than they’re connected to the rest. The degree to which subcommunities can be safely assumed to exist is measured under Modularity. The higher the coefficient between 0 and 1, the more specialized the subcommunities in the network (ours is 0.3). To date we see 6 big sub-communities, with Edgeryders 1 at the Council of Europe easily recognizable if you zoom in the light orange colored edges; same if you look closely at that in dark blue - Futurespotters.

Check out below how Futurespotters evolved from mid March when there was just me and disconnected members like Labanita or Ale Mambelli, who had yet begun to interact -> to July, when we have a full fledged community, and country community builders (eg @Inge, @Hazem) are well immersed in the network. 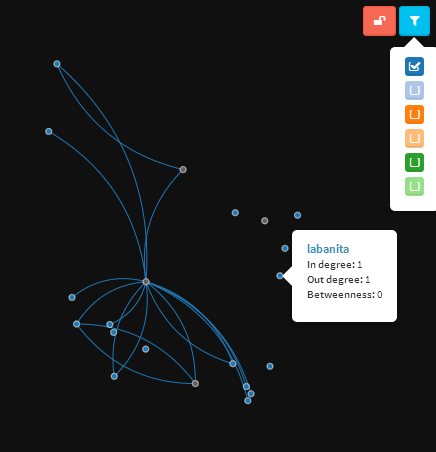 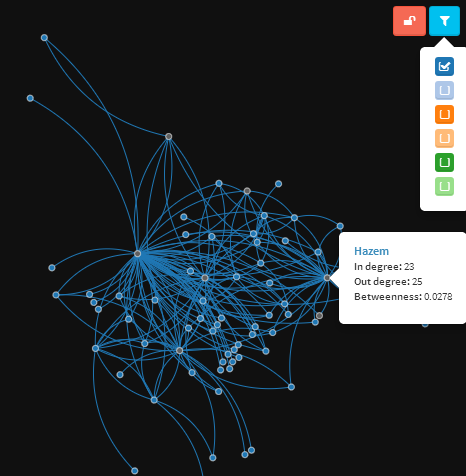 The timelines below visualize posts, comments and shares of the two, divided by who wrote them: moderators and non-moderators in the network. The bigger the share of the content written by non-moderators, I’d like to think that the more resilient our community is (not sure resilience falls under any term in network analysis?), because it’s less dependent on moderators eg users like myself, Inge, Hazem etc. I’m satisfied to see the share of community posts from 2013 to this year has been growing steadily (20%).

If you look at the upper right hand corner of the page you see a link to Tutorial, which contains 5 questions to help us learn to interpret network analytics. I got 4 out of 5 right, so I’m pretty satisfied!

Key take off points for me personally about Edgesense:

The above is more of an airplane view of what Edgesense shows, so don’t count on it, rather take a tour yourself and see what you discover. BIG thanks to @Luca Mearelli, @Matthias and of course @Alberto for the efforts to build and integrate it with Drupal – these guys have built a new drupal module! For all the technical details, check the GitHub repo.

just tried the tutorial , edgesense is actually easy to use

, although the network seems to be very complicated but this made it easy to see a better picture.

the only thing that has no “info” tab is the color of networks , was that intended and what is the light blue and green colours refer to ?

Subcommunities are up for interpretation

The reason I think why there’s no Name added to the colours is that the software doesn’t return these and it’s up for us to interpret.

Eg: the software doesn’t know that over the last 3 months we had a project called futurespotters, it just sees that a group of people are talking to each other more than with the rest, and it groups them.

For what it’s worth, the light blue seems to be the unMonastery group, whereas the green (both light and darker) are not clearly defined: people in here have been in Edgeryders 1 (Council of Europe) and/or contributed in various threads after that: LOTE, unMonastery, or posts that are not part of specialized conversations sustained in the long run. A lot of them are connected to Nadia, which makes sense because out of all of us community managers, Nadia’s network is the more diverse/ chameleonic

Hope this makes sense, take it with a grain of salt.