The Assembly: when crises hit, is tech the answer?

Health crowdfunding, a socialist crypto-currency system, or insect farms. What would you choose when crises hit your futuristic distrikt? 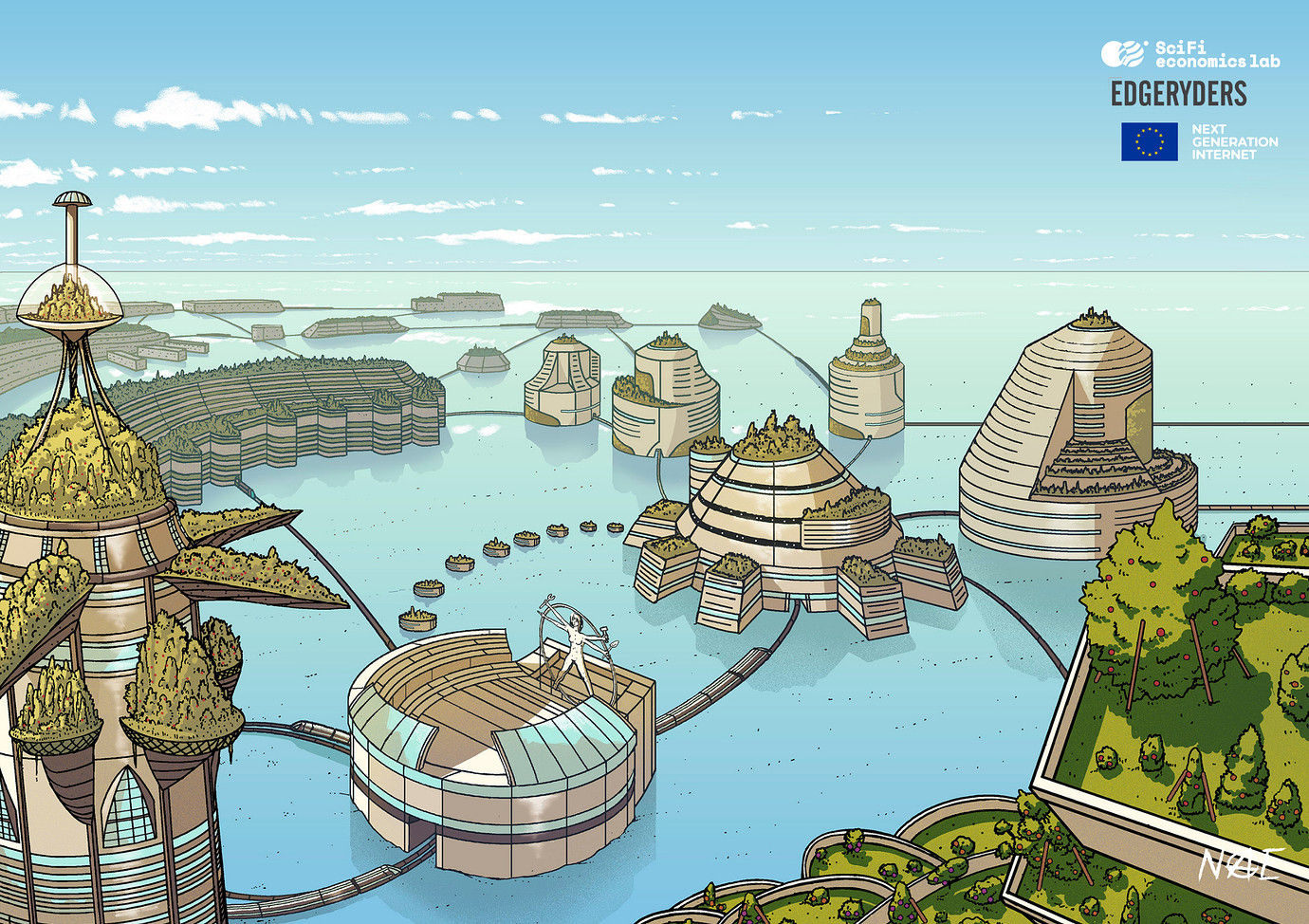 “A pandemic is an indicator that there’s something inconsistent or unsustainable about the city that we have built,” someone passionately argues. This sounds like it could refer to what we are experiencing today in the world.

It isn’t. But it is a crisis that was discussed during an online game event organised by Edgeryders to understand what role technology could and/or should have in our future.

In the distrikt The Assembly - part of a collection of artificial islands called “Witness”, floating on the ocean of a future Earth devastated by climate change - participants took on the role of council members to discuss what to do when a pandemic and a famine would hit them.

Is “more tech” the answer to everything? And in moments of crisis, what choices could policy-makers decide on? What are the trade-offs of each decision that is being made?

So there we are, floating in the Atlantic Ocean, living our lives in a society that is decentralised - and federated. We don’t have any central control systems to prevent excessive concentration of economic power. Our government issued IDs are coupled to our digital currency and everyone is the owner of their generated data through data co-operatives. We’re doing quite well.

But then disaster strikes: a pandemic. And right after that a famine.

The game offers us several options to choose from to battle the crises.

The conversations that happen are thoughtful and take into full account the different reality that we live in and rely upon the cooperative nature of the distrikt to weather these storms. Such as crowdfunding, introducing a socialist crypto-currency system, or creating a new food supply through insect farms.

Focusing on the right problems

What becomes clear throughout is that we should focus on what the actual problems are before anything else.

In case of a famine, are some people hoarding while other people suffer? In that case “we could implement a socialist crypto-currency to ensure equal distribution,” one participant says.

But, if the crisis is the result of a food production shortage, then the equal distribution of resources doesn’t hold.

“The crisis might be the result of some mistakes, we need to address both the economy and infrastructure. Something needs to change in the way things have been run since we don’t have enough production for food”.

Thinking about whether “it is an issue of not being able to pay for food,” and choosing the socialist crypto solution or if “there is no food available we should go for insect harvesting.”

When looking at how the crisis affected the Assembly, the game cards show that the famine only negatively affected the public opinion, not necessarily the economy, someone notes. “This means it affects not everybody at the same time, but there is inequality,” they argue. “We could focus on promoting the exchange between the people who have too much or weigh enough and the people who don’t.”

It doesn’t stop there. You need to build a shared, realistic understanding of how societal change actually could happen. And understand that, painfully, policy decisions take time. Especially in a place like The Assembly, where every voice is equal, it takes time “to discuss and barely come to some form of decision,” as one of the participants concludes towards the end of the event.

“I would focus on something that ensures the distribution of food rather than trading food,” a participant argues. They mention this because trade is based on what is valued, and “if someone is starving and they have nothing that other people necessarily value,” people could starve.

This is important to keep in mind when creating conditions for change. The participants talk about the ways in which certain policy decisions would affect the outcomes based on The Assembly’s value system.

“We are used to feeding our communities with in kind trading,” a participant says, “more of a sharing economy, and that might get us out of the immediate issue of the famine.”

Should we choose a long term solution that will benefit us in the long run but will hurt our society now? Or can you have both?

You need to “spend time to produce food, heal the sick from the pandemic,” someone says. And those trade offs can be very painful when you “design a decision making system that involves a lot of attention to every voice.”

Someone pleads that we need to focus on “longer term thinking,” and that immediate actions won’t end the crisis. “The only way to actually find a way out of this is through science.”

But others wonder that if we do so, will there even be a society in the long run: “if we don’t treat the health of our population, then you can rest assured there won’t be an economy.”

Technology or economy or both

Instead of immediately believing that “there’s an app for that”, participants sought to understand the economy, the values, and its infrastructure. Everything is interlinked.

The Assembly could be described as an “anarchistic leaning cooperative district.” And during the event, people instinctively chose solutions that are in line with the nature of the district, from crowdsourcing health care to introducing a socialist crypto currency to distribute wealth.

There was a “richness in the messiness” and “policy decisions take time, even when you don’t have it,” including a wide ranging discussion on whether to focus on long term solutions or taking immediate action.

And in the end, people actually decided to go for non-technological solutions.

“It strikes me that a pandemic is a kind of a moment where people can come out of their niches and help out in a more physical way with what would be needed.”

Background Reading about the Assembly of People