The Covenant: Having a ‘divine’ power to make changes 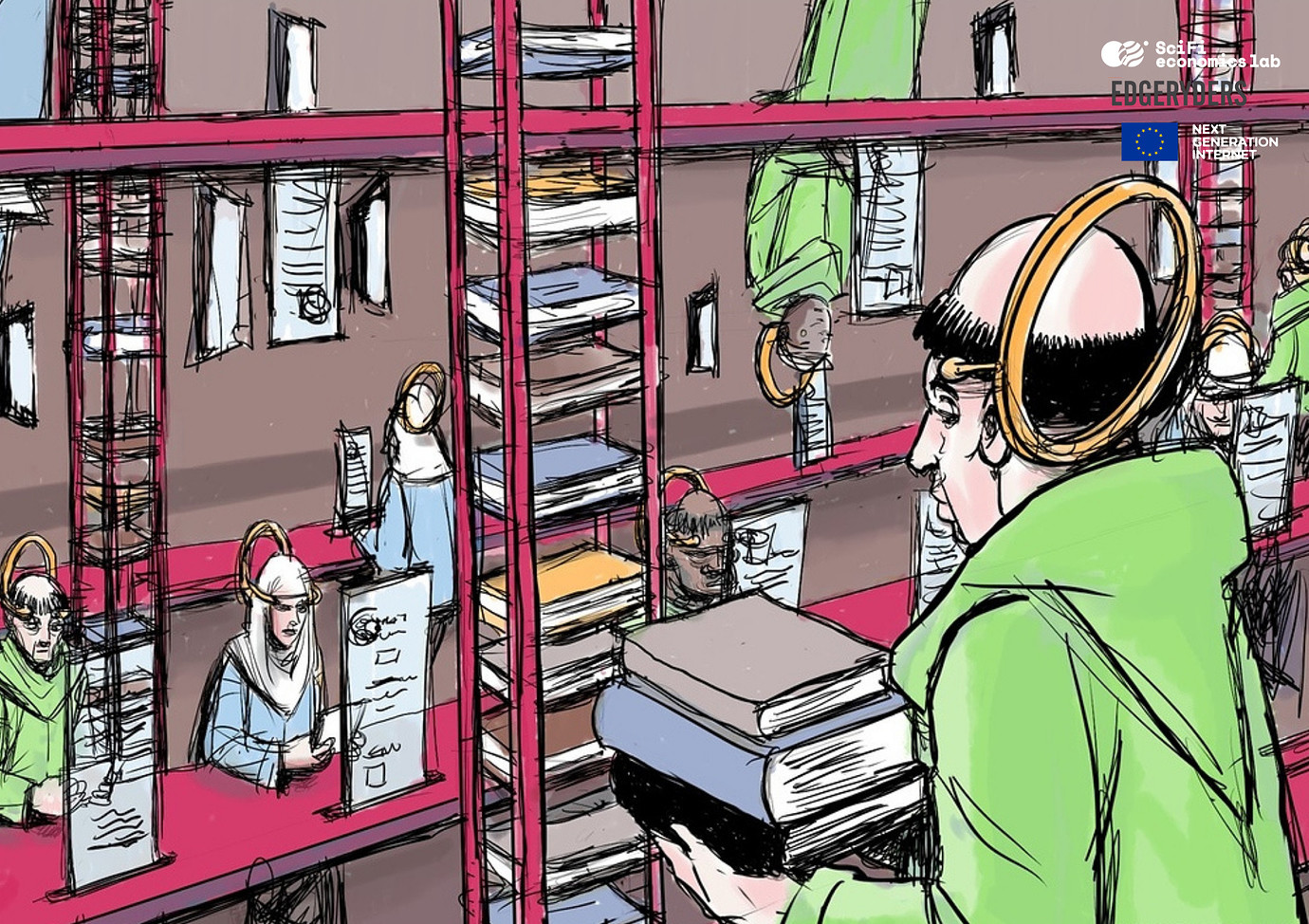 When a crisis hits, do you choose long term or short term fixes? And does it matter what kind of government structure you have?

Imagine this: it’s 30 years into the future and you’re living on an artificial island group in the middle of the Atlantic Ocean, all with their own specific government and economic systems. Yours is dual: both religious and secular authorities rule over the “distrikt”. Then, disaster strikes, a pandemic followed by famine. How would you deal with them?

This thought experiment is part of a game developed by Edgeryders incubated within our SciFi Economics Lab. On November 29th to conclude a three-year project, artists, technologists, policymakers and others came together online using this game to explore how we should build, monetise and regulate the Next Generation of Internet Technologies so that they contribute to the wellbeing of people and the planet.

In the Covenant, participants discussed how they would deal as a society with a pandemic and a famine. The distrikt, due to its religious institutions, tends to be more hierarchical, but also has very effective monastic production not burdened by supply and demand.

Thousands of years ago, monasteries were producing simple agricultural goods and craft products, such as honey or beer. But in the covenant, we are in a much higher developed technological age, which has resulted in monasteries becoming high tech manufacturers.

As a result, quite early on participants realised that long term solutions seem to be easier to implement, at the behest of a momentary decline in trust in the government. But how does technology play a role?

“Food shortages might come from climate fluctuations,” one participant argued when discussing policy solutions. In times of crises, participants realised, it’s important to focus on which issues to address to “fix” them. What is the actual challenge?

But before you come up with solutions, you should think about short term or long term solutions and their trade-offs. Should we demand people to self-isolate? Should we focus first on making sure everyone is sheltered, fed, that “their needs are met?” someone asked.

Or instead, “use our religious authority to lean on the wealthy individuals and the corporations of the covenant and ask them to alleviate the suffering of the people being hit by the pandemic.”

These solutions will help to relieve some of the immediate pressure, a participant argued, but don’t solve any long term effects.

“We do have the advantage of two production systems and one of them is not a capitalist production system, but the monastic one,” a participant noted. “This might give us some advantages of some manoeuvring space.” Another person added that “Monks tend to be quite resilient. We could shift a little bit of a load over to a monastic system as it doesn’t optimise, it’s not efficiency-driven.”

And not only that, another person said. They noted that The Covenant has “two superpowers so to speak” one of them is the dual economy, but the other is that The Covenant is a fairly hierarchical society and has a “very deep-seated respect for authority because authority is very close to religious authority.”

This means, they argued, that in The Covenant more is possible as opposed to non-religious and completely secular societies. “You pay a price because you are tampering with the natural balance in which society was already,” but you have the ability to make decisions that are not the most popular.

As a result, the participants expressed a marked preference for permanent effect policies, as opposed to quick fixes.

Although The Covenant has highly developed digital communication technologies, little was discussed about potential technological solutions. The Covenant has a dual internet - one that is open to anyone and the other only editable by religious figures - “a fact-checked internet” as someone called it. But with these specific crises, preference was given over economic solutions that did not necessarily include any specific technological approach.


Background Reading about The Covenant