The Edge of Funding - Sustainability and Financial Models

[Editor note: The following notes were made during the “The Edge of Funding - Sustainability and Financial Models”, of OpenVillage Festival (19th October 2017). Quotes are not verbatim but summarize what was said. If you feel something is mis-represented, please tell us in a comment or with the “Flag → Something Else” feature and a mod will fix it. – @anu] 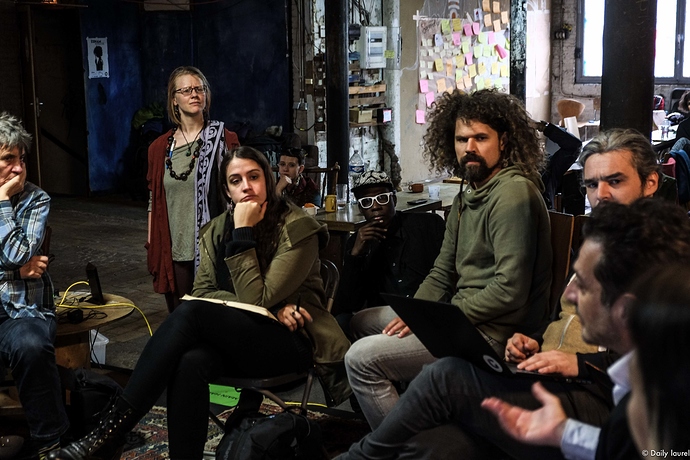 Active in the startup sphere. Mostly in technology companies. Invested in 15 companies. Most angel investors invest in what they know, eg. real estate.

Consider fellowships. Very analytical, structured way of approaching questions. Her work is looking at use of data in issues of social justice and criminal justice system. Used to work in Data For Justice: show inequalities in the criminal justice system. Lawyers, activists, advocates, … Gathered data and sued police department of Boston because they refused to open their data. Won the case. They were doing more stop and frisks in poor neighborhoods. The community was disproportionately targeted by the police department.

But she was a ‘one woman band’, and that’s not sustainable. How can we get people paid, involve more people eg. through foundations of universities. Paola has been funded for her work through applying for fellowships. One at Harvard, MIT, Mozilla. Little by little gaining more experience and data for strategies that can be applied in different contexts.

Has been active on the platform. He’s looking specifically at legal frameworks that open new ways to create assets and manage them. A government is an agreement, a company is an agreement. Instruments (eg. shares, debt, derivatives). Nuance between rules of the game and the ball. If you’ve got resources, why do you need money? What sort of agreement or accounting or means of keeping score to do what we need to do. Has been conducting an international review and a historical review. What was here before banks? Commons? No, made proprietary. How has it been enclosed? 75% of money in existence is based on land. Came about through banks lending money for mortgages. Nobody really knows how the system works. How can we use complementary means to get done what we need to do with as little need for the system as possible, bootstrapping.
###Group for the long term:

Money or money’s worth? We think of property as a thing. The development model in the UK is that you buy land, let it increase in value and sell it off. Land as a commodity. If you break down land, there are certain elements. First: rights of use (fishing, grow crops). Second: rights to fruits of use of land: who gets them. Mortgages: you’re giving the banks the fruits of the use of the land. Third: right to keep somebody out, exclusion. These three rights can constitute the sharing of surplus.

We can easily create agreements that . If you have a piece of land and you put things into it (work, fertilizer, …) and then you get stuff out of it and distribute it. The way that we have been scaling this has been through companies with shareholders. Everything is a cost for shareholders, they don’t share.

Imagine a club where, if you are part of the club, you get the right to live there. It’s going on in London. The club owns the land.

You go to a landlord and ask for the rights of use. They put in the land as an investment. And they get a return. You need to do it long term, so that you actually invest in the place (you won’t do that if you are only there for 6 months).

A trustee says what will happen, a custodian says what will not happen. Moral rights. Non-dominion: no dominant rights, nobody tells you what to do. It is the right to be able to say no.

A club is both open and closed. Anyone can become a member, but it only caters to its members.

With Paola, @Noemi and @Heba
Takeaway: ideally you find an angle which helps make some aspect of your work attractive to a funder. This validates the project and you, Once you got in the first time then its easier in the next times.

Paola: my theory is that collaboration is super expensive. Is should be paid because it is a lot of investment. We can convince foundations or orgs to pay people to collaborate.

Heba: When people have no idea how to make a product, how do you do it?

P: What inspired me is community organising. It happens for the sake of community. Same with collaboration.

The reason we do it is because we want to, not necessarily for an outcome.
You bring your own perspective: you ask questions, how tech and openness and care interact. First try to diagnose what collaboration is possible, we are creating a framework with which we can operate.

Q: What happens when an organisation like ACLU gets empowered through technology? (Data for Justice project). That was a question that starts it, You have the organisation and the community, so you promise to create a framework, That makes the funders to understand that they are creating a tool.

Its also a guide for how to design a project.

Heba: still starting her project, doesnt know how to write a proposal. Working in a hard context in Egypt where its hard for civil society to work. Shes working on her project and not getting paid, but she has a support community which she can rely.
Now collaborating with Hazem to write a concept not for the project to create a cycling infrastructure in Alexandria.

She wants to gather activists, see what they can do and put it out there to the community, then assess.

P: There are urban fellowships to create this. IE Women cyclists scene - your output would be normalizing the attitudes.
Friend who was a bicycle strategist in Mexico. The fundable project could also be: looking at how other cities did it.

Noemi: can you hop from project to project, while you are already giving most of your time to a core organisation, similar to a full time job?

Q: What do you think of the civic tech. Civic hacking scene?
Paola: worked with or for the Mexico Innovation lab, or Code for America. They try to substitute the government, but the gov doesnt work. So its practical, but its not long term. The gov gets away with problems they dont have to solve, because the hackers do it and do it for free.