The onset of open biotech

#The onset of open biotech

Some thoughts on my activities in open biotech in the past month. 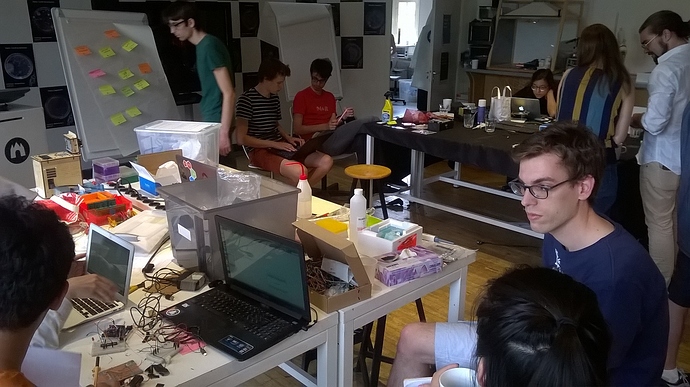 At the end of June, I attended a workshop by the EUIPO on strategies to educate youngsters about IP. About 60 people below 30 from all 28 countries were attending at the headquarters in Alicante. I had already attended the first workshop last summer.

The discussion fell largely into two categories: how to help vulnerable smaller or starting artists and how to help new entrepreneurs. Despite efforts by the organisation, open alternatives (CC, open source, public domain) were not part of the conversation so much. The generally prevailing mindset is protecting rather than sharing.

Though, the attendees were brimming with energy as they learned about IP and were making plans to set up awareness raising projects in their respective countries. If we can show youngsters to be conscious about the impact IP has on their daily lives, we’re already one step forward.

An advantage of outlier views is that people know the few proponents in their organisation - “Open Source? Go talk to that guy”. That’s how I got talking to Malcolm Bain, a lawyer, lector and advisor specialised in open source software. On a beach party in Alicante, of all places.

Malcolm seemed happy with how open source software has evolved into a fundamental, albeit relatively invisible, part of our digital lives. He cited how most software is built on top of open source digital infrastructure. And that companies like Microsoft, IBM and Google are big contributors to open source software, contrary to what people might think. Whatever those numbers may mean, this can make an optimist hopeful.

The first are the basic tools you need in order to do biotech. As it stands, there are ample open lab hardware projects around, as well as affordable basic instruments like the Bento Lab. Furthermore, the BioBricks Foundation is committed to growing a database of standard synthetic biology parts called ‘BioBricks’.

Are we at the point where enough people can easily get going? Probably not, although DIYbio labs are helping. Legislation on GMOs (which is not necessarily a bad thing) is another hurdle that prevents people to easily contribute to a project like Open Insulin, as the project revolves around engineering microorganisms. Our own struggles to find a certified lab in Belgium are a testimony of the extra barrier.

Second are people. A critical mass of contributors to biotech fundamentals is needed in order to make real progress, to make the efforts enjoyable and to keep going. A great example of a community driven effort in making biotech accessible is the annual iGem contest. And DIYbio labs are localised community hubs that play an important role as enablers and breeding grounds for open biology.

Lastly, Malcolm mentioned that you need to crowdsource or -fund all the effort being done to get rid of closed off knowledge. As an example, he referred to groups of lawyers systematically fighting patent by patent to open up knowledge for the public. This requires a degree of coordination.

The latter is where most projects are lacking, including Open Insulin. The Oakland group is organised well enough locally to progress, but it’s not resilient and the collaboration does not scale well, locally and internationally. Coordination is expensive in time and/or money. It is where I am investing most of my time at the moment.

A few months ago, when starting Open Insulin, I had predicted that the global collaboration would be autopilot mode due to the clear incentives of sharing information and experience across teams globally. The difficulty would mainly be to keep the local collaboration going. I referred to the overhead costs and energy that goes into putting people and resources together productively.

Reality so far has been the opposite: the international collaboration has proven more difficult than the local one. The main reason is an obstructed flow of information. One of the theoretical advantages of joining a project, rather than starting a new project, is that there is plenty of work to start from.

Yet, if the information is not curated, this can be a hindrance rather than an advantage. In an environment with limited organisation of information, only those involved from the beginning have a good enough overview (from legacy) to have access to all the right information. Anthony from Open Insulin in Oakland mentions in his OpenVillage session proposal that the latter is a local problem as well.

For us in Belgium, picking up where CCL was at, meant incomplete information and overlay in communication. These delays did have an effect on the morale in the team in Ghent. BioFoundry in Sydney decided to take a whole new approach from scratch, and they are now moving forward with research at a more rapid pace.

In search for solutions, I’ve looked into Aquarium, a lab automation tool in development at the University of Washington, and the Open Science Framework (OSF). On OSF, there are other open, large scale global collaborations such as the Reproducibility Project: Psychology and Reproducibility Project: Cancer Biology. They can serve as good examples of how to organise similar projects.

On 8 and 9 July, Waag Society & Digi.bio hosted the first Amsterdam biohackathon. It brought together biohackers from the Netherlands and surrounding countries like Belgium & Germany, but even Canada. All in all it was an international bunch, which made it a pleasant biohacking community gathering.

We were there with a Belgian delegation of 5 people, all involved with the Open Insulin project group in Ghent. We came to get to know and play around with the microfluidic chips developed by digi.bio. Microfluidic devices have the potential to accelerate the way biotechnology research is done, and the open source version makes it possible for communities such as biohackerspaces to reap the same benefits.

I was also planning to meet Tom, who is developing cell-free extracts. In essence, this extract allows people to do genetic engineering with the soup that’s inside a bacteria, without the actual living microorganism. Legally, this is big, as working with live microorganisms often means legal & financial barriers. Yet anyone can work legally and simply with cell-free extract.

For Open Insulin, and open source protein engineering in general, this technology offers opportunities. If we can somehow make the potential reality for the open source community, it’s a solid step towards democratization of scientific research. In other words: plenty to talk about at the hackathon.

When thinking of a collaboration on using cell-free extracts for Open Insulin, we quickly came to the known issue: how do we collaborate efficiently in open.citizen science projects?

We sat down with a few people to discuss & brainstorm. The group came up with a plan outline that we will try to implement over the next months in the hopes it boosts the Open Insulin collaboration. Hopefully, other citizen.open science projects can also benefit from the approach as we test it out.

On the train ride back from Amsterdam, I read this work on putting science in perspective. Then I read this captivating article on how large publishers rose to power. The system is not conducive of science done primarily for the greater good. It runs on other incentives: those of publishing, patenting and money. What we do as biohackers and with projects like Open Insulin is political, and needed.

In 2001, then Microsoft CEO Steve Ballmer called Linux “a cancer”. Today, as a mastodont company whose legacy is primarily built on proprietary software, Microsoft is embracing open source more and more. Let’s see where this biotech thing goes.

In the next weeks I continue to study open science collaborations, looking at success factors and guidelines to copy. I’m planning to visit Counter Culture Labs in Oakland, home of the original Open Insulin group, in September to help organise the collaboration.

This blogpost has been realised as part of the OpenCare Community Fellowship Program with the support of SCImPULSE Foundation.

I had managed to miss this post! It’s clearly an interesting point in the trajectory of open source wetware.

This decentralised stuff was never easy, for anyone. But biotech has an additional regulatory hurdle, which software hackers do not have. Hardware hackers do have it: Davide Gomba, an A-list Italian hardware hacker, once told me that regulation forbids people in the makerspace to touch the power tools, unless they are employees of the space itself! But you wetware guys are really in the regulator’s crosshairs.

Hopefully technologies like cell-free extracts will help with regulation, and microfluidics will help with cheap raw “experiment scalability”. But in the end, I think Malcolm is really really right: at the end of the day, open source hackers need to bite the bullet and redo the work from scratch, but this time with the right license. Stallman and Torvalds and the others, they had to redo what other had already done. GNU/Linux was, at the beginning, a poor relative of Unix: but it was open, so it could be improved.

And once that was done, you still had the problem of figuring what the hell was going on in the code that you were supposed to improve upon. Turns out hackers are better at getting code to run than at documenting it. Vast amounts of time are spent in trying to decipher code which is legally open, but hard to understand and therefore not really actionable. This is similar to your struggle with following up on the work already done in Oakland on insulin. Slowly, the toolkits emerged: in-code commenting practices, wikis, GitHub… there may be something to port to wet hacking there.

Moved the topic to OpenCare, so @amelia does not miss it. I added the blog tag, which is how we will implement our blog in the end.