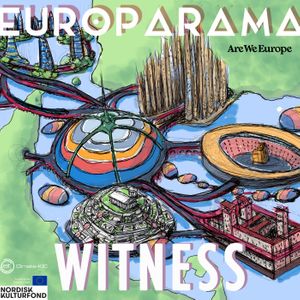 Hygge is the first Distrikt of Witness. It was initially meant to be the " nervous system of Witness." The political history of Hygge begins with the founding of Witness itself.

For this season, Europarama joins forces with Edgeryders and their Science Fiction Economics Lab as they had an incredible idea. Instead of writing academic papers, they decided to channel out-of-the box economic research by building the world of Witness.

Witness is a fictional city floating in a post-climate change Planet Earth, where people are organised by districts each experimenting a different social contract and a different economic model, but all of them connected by being constrained in that floating space.

In this episode we explore Hygge with co-hosts Giuseppe Porcaro, Alberto Cottica and Joriam Ramos - author, networks specialist, and proud owner of a sci-fi YouTube channel.

Hygge went through a tumultuous time after the Zero-Day Fracture set in motion a chain of events that would see Distrikts seceding and throwing aside the careful top-down planning engine that Hygge was designed to be.

Today, Hygge is a democratic socialist structure, with a military presence left over from the short but bloody history of the Marches and the Distrikts that broke off. It is still an emblem of power, the seat of many debates for representatives, and boasts perhaps the single largest peacekeeping presence in Witness. Outside of the the Library of St. Benedict in the Covenant, Hygge is the only Distrikt truly critical to the State Machine’s existence, as it houses key hardware, along with CIVICSMOD, a multi-distrikt team that operates the machine.

You are encouraged to contribute to its making or to freely use it for your artistic or research projects. Join in: https://scifieconomics.world/

This podcast is brought to you by Are We Europe, a border-breaking media trying to bridge the gaps in European culture and identity. You can become an Are We Europe member and connect with storytellers across the continent starting at €4 a month. Just go to areweeurope.com/member and help Are We Europe build a new media for a changing continent.

Get in touch with Giuseppe Porcaro on twitter @porcarorama