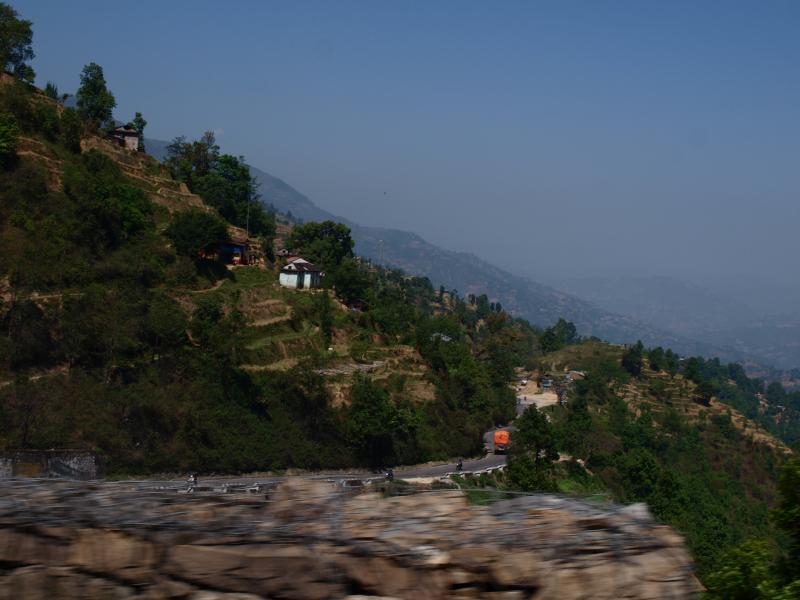 A week ago, me and Matthias went for a day-long trip to Dhading district with a small mission. It’s been a great lesson for us to see how the country looks like from outside-of-the-capital perspective. Kathmandu gives some taste of Nepal, with tiny mandirs located on each corner, where people worship the gods and godesses of their preference, with colorful flags decorating houses and streets, and plenty of small fast food places, where you can get national delights, such as momos or typical Nepali lunch set with dal, pickles, yoghurt and rice. You start getting used to people being extremely warm and open towards each other, saluting passers by and slowly diving into the complex social tissues of this nation, involving religious diversity, ethnic richness, 123 languages and countless dialects spoken around you, and cast/subcast relations. 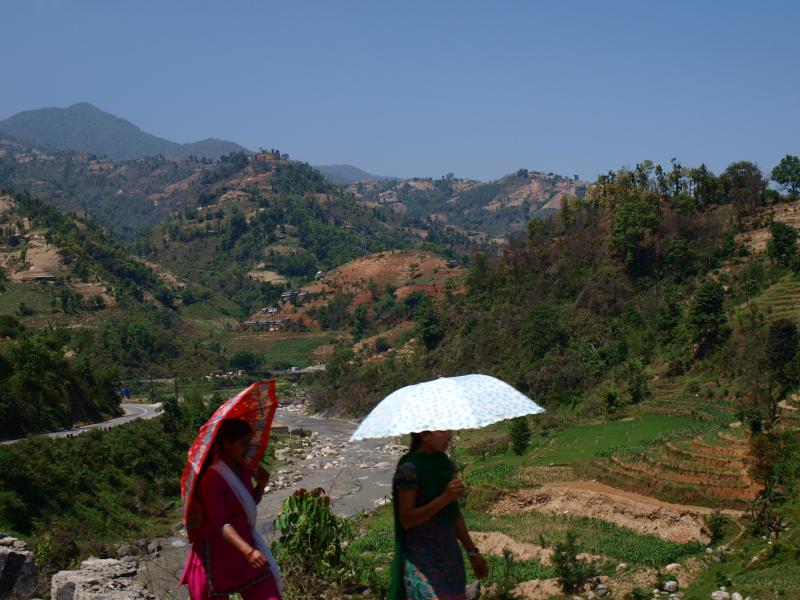 Kathmandu, inhabited most probably by 2.5 million people (although the right number seems to be impossible to obtain, so far each person gives a slightly different idea about the size of the city and it varies from 2 to 5 million citizens), is just a small portion of 28 million nation, of which 80% live in the villages. We had a chance to see a little bit of that reality during the trip 110 km inside the rural areas of the middle strip (hilly part), indeed quite evenly populated. The car passed by a whole range of small villages situated along the roads, consisting of small houses, quite often interestingly attached to the slope on which the road sits - so that the ground level cannot be seen from the street perspective, but once you take the steep stairs down, you end up on the riverside, in a bedroom, where the whole family of three, four, five, sleeps in the same room. The road-level of the houses is mostly devoted to small shops and restaurants with clay hearth fired with wood, on which milk tea is constantly boiling, and once you stop to have lunch there, they use it to cook their delicious, fresh food in a set of metal pots. We were fed by a lovely family who went down to bring some fresh pumpkin leaves which they fried in curry for us, and everything they prepared was just pure nature and savory. 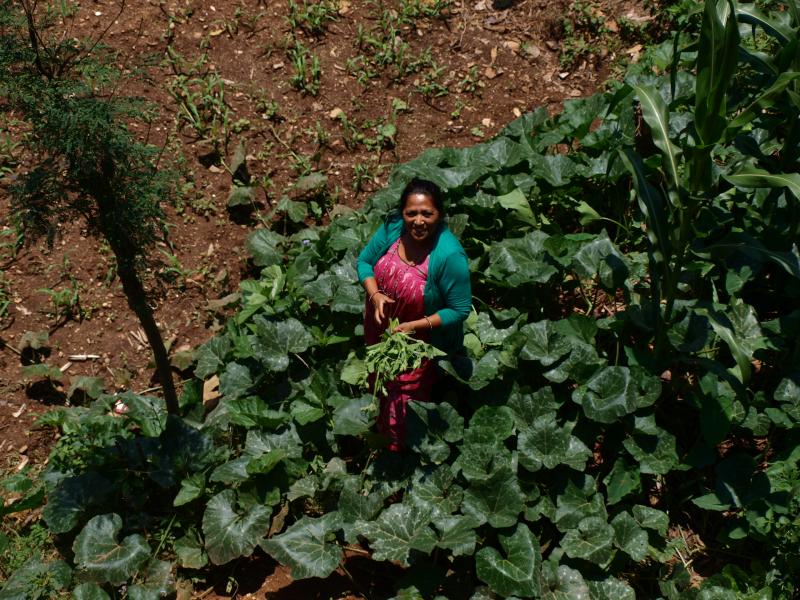 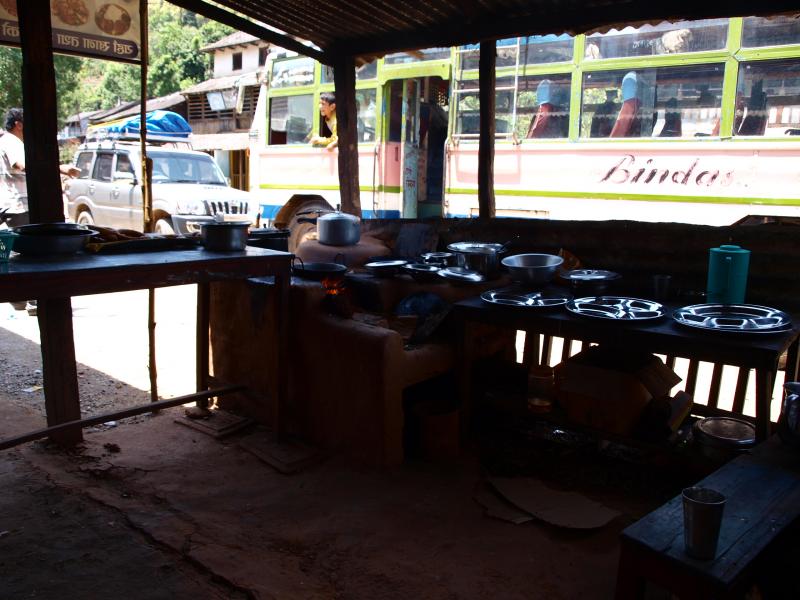 After we passed different landscapes, that varied from river bed surrounded by terraces on which crops grow, banana and mango trees, springs coming out of the rocks, to higher areas covered with forests, we finally went entered Dhading, one of the cities in Nepal, and headed off-road for 18 kilometers uphill. There the landscape changed fast into red soil and silver stones, big coniferous trees where little boys pastured goats. The bumpy road to Jyamrung took forever and was a great test to our outstanding Nepali driver - but the view from the top of the mountain paid off with a vengeance. 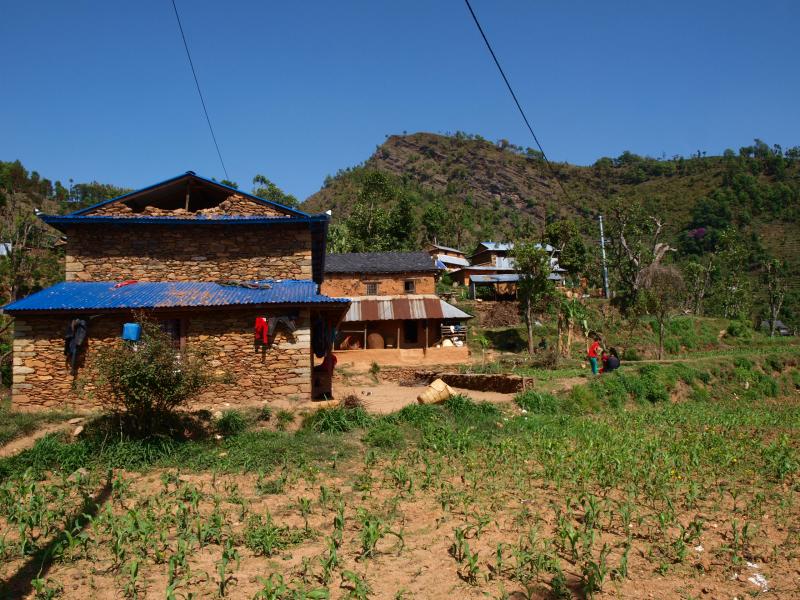 Kumai Jyamrung is a picturesque little settlement of red houses dispersed along the hill. You get the sense of how most of the Nepali lives at the moment - Matthias was pretty impressed by the fact that people here don’t use money on a daily basis, and as it is so difficult to reach them, in a way they practice sort of an organic anarchy out there. These extremely remote and distant from the rest of the world places are highly self-contained. All they eat grows on the hills around, the wood they need for fireplaces they find in the forests around, their demand for electricity seems to be reduced to one light bulb per house and probably a socket, and one radio per community, to which they all listen together in their free time. Kids play around, bring us fruits they picked up from the trees and try out their English with us. Women cook and chat in the shadow. Few men we had a chance to see are either too young or too old to migrate. These villages are to a high-extent run by women, whose husbands and adults sons left the country to find jobs in the Middle East or elsewhere.

Jyamrung was probably particularly lucky among other villages in Dhading - most of the houses were still standing. These lovely buildings, made of materials available around - red rocks, clay and wood - are all across the country constructed by families, in a traditional way, but without following any architectural guidance. No wonder - even in Kathmandu people build their houses without careful supervision and neglecting rules approved in 1994, after another disastrous earthquake. As a result, we pass by houses which walls are cracked or crumbled, and where people do not want to enter again. Ironically, the habit here is to store all the food upstairs, on a wooden floor - nobody dares to go there now to take the supplies down. 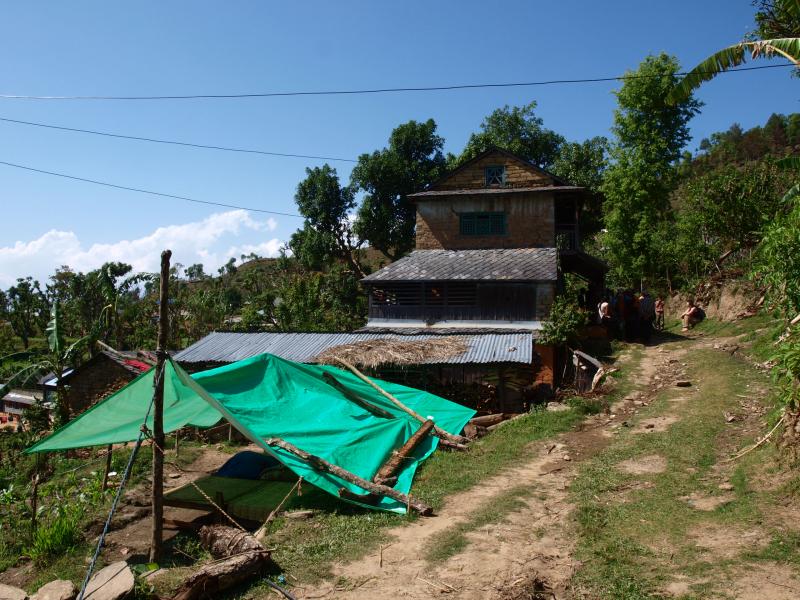 Despite the problems, life in the village seemed to go on as usual - on its own, slow pace, quite typical for such remote places. We talked with the people, handed out what we brought and headed back to dusty, crowded Kathmandu, not without a small regret that we can’t just stay out there for a little longer and disconnect from the world for a little while.

Later this week, we hosted first Edgeryders informal meeting in our garden - around 20 people showed up and chatted about politics, geeky stuff, travels and, surprise, earthquake. In a city where life ends with the sunset, it seems that these meetings might be one of the rare occasions to replicate the social night life of Europe - and I’m looking forward to the next ones.