We aim to exceed the borders of traditional and modern, young and old, serious and absurd, touristic, local, normal, bizarre! Every independent traveler is a superhero to us. So what’s it about?

It’s about USE-IT? The amazing, colorful printed maps and mobile applications that can be found in 43 European cities and that make traveling a completely different experience by introducing the city from the perspective of locals, young people and those who know the best spots and hottest up-to-date tips and stories.

And also about Tbilisi? The capital of Georgia which is full of amazing culture and rich history, endless hospitality, delicious cuisine and specific traditions. The city that is constantly buzzing with life, traffic and a sort of chaos that you just fall in love with.

The match of those two USE-IT and Tbilisi is exactly what we are aiming to create: The map that will help the visitors to cut the tourists’ blindfold, feel and act like locals, understand the local customs and discover the most interesting no non-sense places to see, shop, eat and drink, get inspired and relaxed. No commercials, just authentic tips from the locals.

But right now we need a bit of help to make it all happen. Check our crowdfunding: campaign https://www.indiegogo.com/projects/use-it-tbilisi-alternative-map-for-travelers/x/11443146#/story

Wanna become part of it?

Hello @Filip_Gabor, good to meet you. I know @KiraVde from Use-IT Brussels, and it seems a really great initiative. I am also a fan of Tbilisi, so I contributed a bit to your Indiegogo campaign. Good work!

I was stricken by a tweet I saw yesterday: https://twitter.com/SIAntiheroes/status/621277627811147777 . This is a map I would like to see: a map that maps great people, and their generous initiatives. I think @Inge would agree! Unfortunately it is not listed as a possible perk in your Indiegogo page…

Hey, @Alberto, nice to meet you too. The content of the map is mostly our responsibility and we are definitely trying to cover those you have mentioned. However, we are trying to connect them with actual places.

This means we will for example have a starting Vegan Café, which is in fact a hub of relatively growing community in Tbilisi, we are also thinking about puting a coworking café, we would love to focus on social entreprises. Food not Bombs also started in Tbilisi recently and we’ll try our best to connect the map users with these kinds of changemaking initiatives. Don’t worry, the things have mentioned will definitely have their place on the map! If you have any other questions, just contact me:)

Thank you very much for your contribution, every support means really lot to us:)

I see where you are coming from. But ultimately a lot of the beauty of traveling is about meeting interesting people, no? anyway, I am sure you will work out a way to put them and the cutting-edge stuff they are doing on your map.

How to put people into a map?

That’s the thing. I completely agree about meeting inspirational people and networking during the travels. Rather than focusing on particular individuals, our aim is to show the places WHERE you have greatest chance to encounter these people, regardless of your preferences. The range will be really wide – from alterative cafés to independent theatres and cultural centres to social enterprises. Hope that is satisfying, but if you have any ideas, I’ll be glad to hear about them:)

but mapping doesnt only have to be geographically linked, right? You can also visualize it in a different manner, for example based n clusters: click cfes and you get the social community cafes, click on environment and you get guerrilla gardening, green fist, etc. It would be great ifsomehow thiscould be linked to the - geographical map -  you are creating.

Great project by the way! If you’d like to brainstorm things (social projects, places, etc) in Tbilisi, I’d happily offer my knowledge and contacts!

the people at tblpod (via@Uli) may also already havesome things mapped out, but those are mostly expat living in tbilisi oriented.

Thanks I will definitely discuss the opportunities with our design team!

And yes, there is a nice opportunity to do this kind of mapping. We are creating only a paper map, but USE-IT network is working on iOS app at the moment (I am hoping for Android version, too) with huge database of all the places and I am really looking forward what would it look like at the end.

Are you in Tbilisi? If yes, we can definitely meet, if now, filip.gabor@gmail.com is accepting any useful contacts and ideas

Thanks for the good vibes!

I am! Though I will go to our summer house next week, but perhaps we can meet up monday afternoon? Or otherwise skype exists

fb group Mindmap and other input

The Tblpod Mindmap @Inge mentioned is this available as list  here http://tblpod.com/guide or jpg in several of the groups listed. Unfortunately a) they didn’t use the crowdsourced mindmap we had started, but did their own, in a different software - and lost the file, so they would have to start all over again to update it. I just switched another version of the mindmap from “shared” to “public” so you can see  - and edit, I think - it as you like: 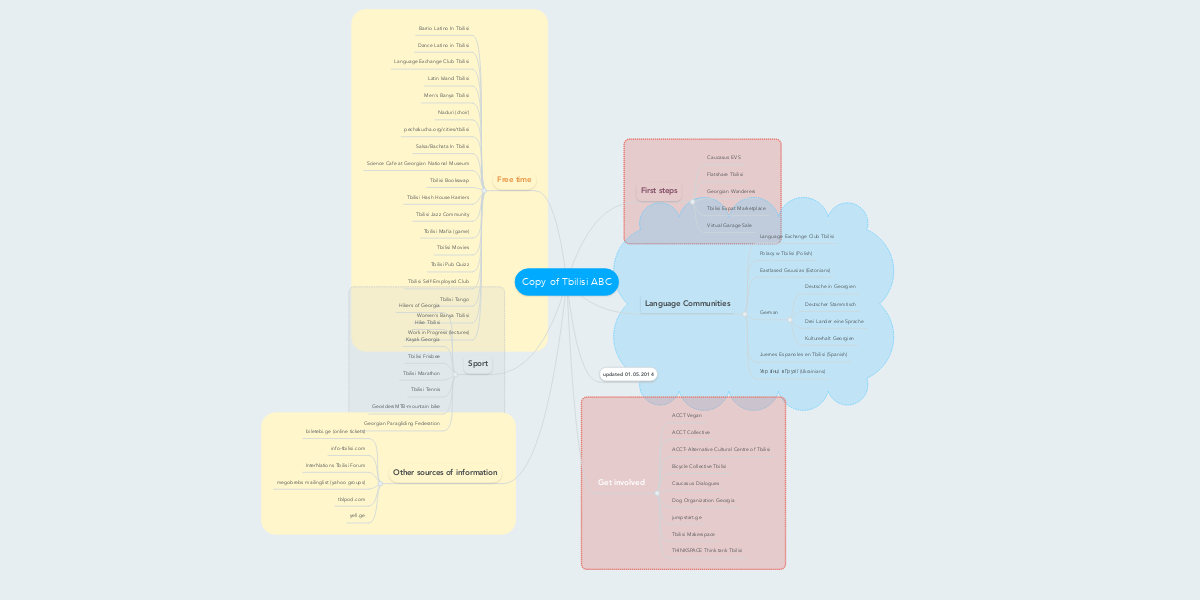 Public mind map by Uli Kindermann. Create your own collaborative mind maps for free at www.mindmeister.com

I had also discussed the idea of an “Tbilisi FAQ” with Tblpod, as many questions - where to find english-speaking doctors, gyms etc.  - kept on coming up agaian and again. I’m not happy with what they came up with, and it#s not updated fr a long time, but fyi   you can find their overview here: http://tblpod.com/database/

I’m pretty sure that Tiflis Hamkari mapped a walking tour of heritage sites, but their site hamkari.ge is down. You can find some infos on them at

You should really meet Daria, who works at GNTA (Georgian National Tourism Association), but is also an active blogger http://www.dariko.net/taste-of-charity-taste-for-charity/

I’m following crowdfunding campaigns in georgia ever since I arrived and and happy to witness a surge in campaigns this year, at least 10 or so on Indiegogo alone so far. BUT:  many of them are done poorly,  organizer just put up a campaign page and think#s that’s it, now they just have to wait for funds to pour in.

NO, wrong, that’s  when the work actually starts - because successful crowdfunding  campaigns don’t focus on funding -the successful ones focus on building a “crowd”. And that requires engaging the crowd, communicating with them, sending updates, etc.  The USE IT campaign hasn’t written a single update yet. If you don’t put an effort into your crowd, you shouldn’t expect the crwod to put an effort into you…

@Filip_Gabor, I think @Uli is offering here some very valuable advice. And I fully agree with him, how emerged is USE-IT tbilisi in the crowd it aims to cover? It was also my first time hearing from you via twitter (antiheroes).

But, that does not mean I don’t think there’s something interesting you’ve got.

I think if the mapping and crowdsourcing is at its start, a lot can be done to avoid these mistakes.

Why dont you become member of FB groups green georgia, social innovation hub (secret group, add me as friend on fb and I can add you), futurespotters: go to the events listed there and mingle. And come to the edgeryder meetings on a regular bases, you will find different people from different initiatives who would def willing to support an initiative as yours.

And of course go through the posts here on the platform where you will find many likeminded people. Take a look at @Alberto’s post on his recent visit.

I would specifically suggest to keep an eye and comment in these groups: Futuremakers, Case Study Adventures, Georgia Futurespotters.

And yes, perhaps if you want to meet up monday, @Uli can also join? I know @ericnbarrett unfortunately is on a holiday. Oh, and @remi, would you like to join as well? Maybe we can even meet up at co-spot?

@Inge,  I have to be in the office til 6 and already have a meeting with the Green Academy team on Monday 7pm http://ge.boell.org/en/2015/05/27/green-transformation-green-challenges-and-opportunities-south-caucasus    But I see a significant overlap of interests, so maybe we can have one meeting after the other, i.e. meet with you guys, plus Tako  and Malkhaz  from Green Acadamy, if they still have time, e.g. at 8pm? we’ll meet at Kiwi Cafe

@Inge and @Uli, thank you for really nice advices.

I definitely agree that we haven’t kept the campaign updated and I will hopefully update it today.

As to the crowd: I would say we are not working that bad on the promotion. So far, we got á 1500 fans on Facebook (we tried to use paid promotion also, but dind’t work for us that well and organic reach was much better) and I see Twitter as a complementary platform, which aims to slightly different target group.

Thank you for the Facebook groups – since it is quite difficult to cover all of them and I didn’t see these.

To our crowd and the communication then: we are mainly targeting to young travellers 20-30 yrs old, who might also be interested in Georgia or have been here before. I have been choosing the groups to post according to this and I definitely use lot of them. Then, we are getting lot of help from travel bloggers and related organisations, who are promoting us through their pages. Also, I launched a direct emailing campaign, since I have emails of around 250 young travelers, mainly Slovakia and Czech Republic, who I have cooperated with.

We are also asking for contributions personally – aiming this approach mainly to owners/managers of the places which will be included.

I definitely vote for a meetup, would love to get to know you guys

@Filip  , 1500 facebook fans is misleading - compare that to 45 supporters to the campaign. You need to use the indiegogo communication as well, send updates THERE, get supporters to join THERE, and then  have them share the Indiegogo link on their walls, or as mails - not the fb link, that only gets you likes, but no support. Trust me on this, I’ve seen enough campaigns with thousands of fb fans and still unsuccessful - becuaee likes only don’t get you a crowd

Cant we somehow include these guys into the conversation as well? Does anyone know them? I can try to get their contact? 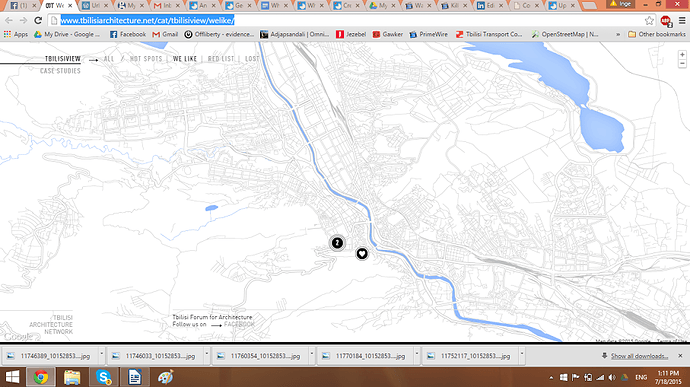