What we learned at Brutopia 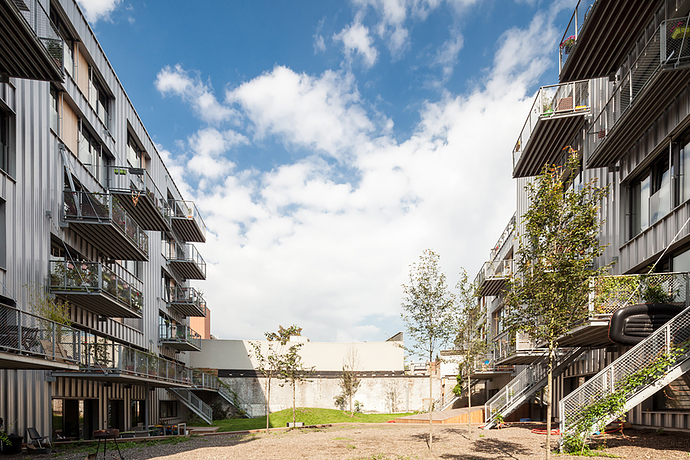 This post is now a wiki, edit at will if you remember something I forgot to put in.

Yesterday, a Reef delegation with @Sabine_B_Frank, @Lee and myself visited Brutopia, in Forest. We had a two hour chat with Mark Van Den Dries, a resident who was also the de facto leader of the group that colonized Brutopia. We were inspired by the space and its story. Lie looked at me and said “Now there is no going back”.

Brutopia’s main thrust was to foster diversity. By “diversity” they mean “attractive for the well-off, but affordable to the less solvent”. This was done by building, in the same co-housing, units with different prices per square meter. At the time of building (2015?), the evaluation per square meter ranged from 1,060 EUR (first-floor apartments, rue de Mérode side) to 2,200 EUR (fifth floor, overlooking the Marais Wiels). These are CASCO prices, so without the finishing. The full price is still 500-850 EUR per square meter higher than that, depending on finishing.

The building is passive. Modern passive buildings allow for large, floor-to-ceiling windows. However, they require building in a compact way. So, Brutopia’s corridors are all external, and most of them face the roads rather than the garden, which is more reserved for balconies (you see them in the photo). These corridors become social spaces in the summer, as people drag tiny tables onto them to have coffee in the sun, and meet their neighbors walking by to and from their own units.

Unfiltered for now by critical appraisal.

Their process in steps

Is this a reasonable synthesis, ladies?

off-topic: architecture-wise the picture(s) reminded me immediately of Mascobado, Montpellier, but steel and less need for air throughput.