What we learned at De Okelaar 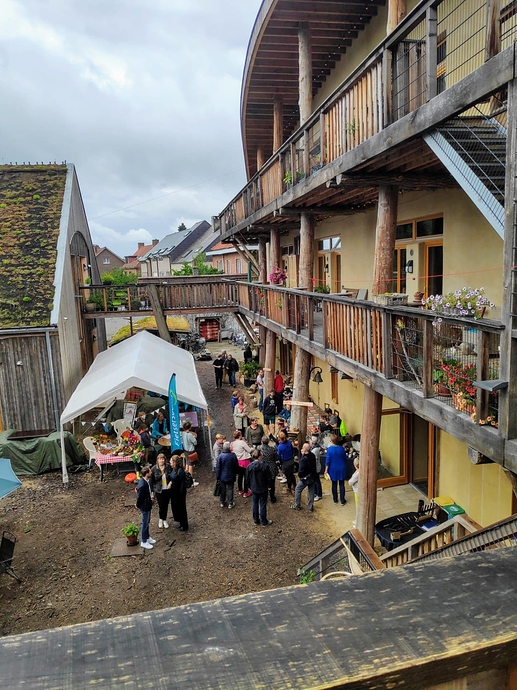 Notes made into a wiki as people will surely remember important facts that I have overlooked.

Last Saturday we went to visit De Okelaar in Wolvertem. It has 23 units and common spaces, more abundant and varied than at Brutopia: garden, common kitchen, common washing room (which also Brutopia has), but additionally a shared office, a yoga/dance gym and a large common dining room with professional kitchen. Common spaces occupy the entire ground floor of the main building. The look and feel is Middle-Earth-ey: roofs covered in moss, tree trunks used in lieu of poles, etc. Overall, aesthetically striking, and everyone in the group loved it.

De Okelaar is quite different in ambition and thrust from Brutopia. It aims at being not only a co-housing, but a place of production too. Its ideal is to be autonomous, though its inhabitants do not expect to achieve it completely. So, it is incorporated according to a complex model, a key part of which is a social cooperative. For now, they run a service of renting a space for activities like yoga and dance, and a dining room + professional kitchen for parties. They are also trying to start a wascafé and a shop for organic food, but it is slow going – and COVID did not help.

The approach to constructing the space was also different from that of Brutopia. De Okelaar started not from a brown field, but from three existing buildings surrounding a courtyard and belonging to the same owner (the parish): a nunnery and two schools. They chose to keep the existing volumes (actually reducing them a bit), but renovated in depth everything within.

Another major difference is the suburban setting. Whereas Brutopia is on tram lines and a 20 mins walk from Gare du Midi, De Okelaar is out in Flemish Brabant, along the A12. If you cycle or drive, that’s about 16 km to Midi. There are DeLijn buses direct to Rogier, but only one per hour. The other way to town by public transport is to take a DeLijn bus to Vilvoorde, then a train.

What did I forget, @reeflings?

Thank you for the debrief alberto. They also host international travellers for periods of 3 month: they stay for free but they have to put some work in the project.

One addition: I was struck about how open our host was about conflict in the group - and that he still felt the trouble was outweighed by the benefits of co-housing/community living. For example, @manuelpueyo, some cohabitants contest decisions taken at meetings during which they weren’t present! Also, regular attendance at weekly meetings is quite limited - quite a few do not necessarily care about making their voice heard. Moreover, the community functions by the “to everybody according to their needs, from everybody according to their desire” principle, leading in fact to very unequal labour contributions to their commons (e.g on ‘chores day’). A further point was that ‘stronger’ and ‘weaker’ people in the community need to be in balance.

Ouups, now that became more than one addition!