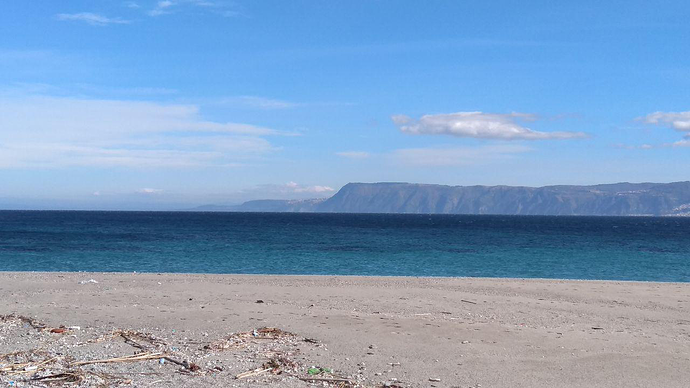 Mainland Italy as see from the headquarters of Fondazione Horcynus Orca

I am just back from a seminar on technology policies to improve social justice and reduce inequalities. The organizers, Forum Disuguaglianze e Diversità, invited me when they heard of the POPREBEL project, as they think that inequalities are a major driver of populist politics. The seminar took place in Messina, on the northeast tip of Sicily: mainland Italy was just three kilometers away, looming across the strait. It was interesting in and of itself, and it ties back nicely onto our work on the Next Generation Internet, which is just starting now. But what was most interesting was the place that hosted us, Fondazione Horcynus Orca. The place felt… utopian. Built around the ruins of a 1st-century BCE Roman watchtower/temple, maintained by ex-inmates of the local mental asylum, meeting place of people in several businesses, from a local energy company to a beer manufacturer. Something was going on. So I asked.

It turns out Messina hosts an “advanced social district” (distretto sociale avanzato). In Italian, “district” carries the idea of production; a tightly integrated network of independent companies, competing on some arenas, cooperating in others (industrial district), of which Horcynus Orca is only a piece, specializing in the arts. As I spoke to Gaetano Giunta, a physicist and member of the small group of friends who quit their jobs to start it all in the late 1990s, I heard him mention values similar to Edgeryders’s own: freedom, happiness, beauty. Business and commerce are the weapon of choice, the main path that leads to being able to uphold them sustainably.

I am only starting to study the district’s fascinating history and organizational architecture, so I will not talk about this now. But I do want to note an investment model mentioned by Gaetano that struck me as super-clever.

In 2010, activity in Messina had reached critical mass. Gaetano and his group were able to attract a largish investment, that went into the startup capital of an Italian social economy vehicle called a community foundation (fondazione di comunità). At that point, they had the problem of investing the money so that this capital would result in a revenue stream for the new foundation to do its job. They did not want to invest in financial assets, as they thought this would betray their mission of developing the local social economy. What could they do?

As they studied the problem, they realized that Italy had launched a plan of incentives to build up capacity in renewable energy generation. This was, in fact, the Italian implementation of a EU program called feed-in tariffs. Such program promised a long-term (20 years) subsidy to anyone installing solar panels or wind turbines.

So, they reached out to the community, and offered to partner up with basically everybody who asked: schools, hospitals, companies, small coops of households. Each partner would receive and steward a cluster of solar panels. The Foundation paid for the installation, and even let the partners keep the energy, to use or sell back to the grid. The Foundation itself gets to keep the subsidy. They ended up installing 2 MW of capacity. For doing all this, they spun off what they call an ESCO (Energy Social Company) called Solidarity and Energy. The ESCO then proceeded to use the foothold gained in renewables to further green the local economy, by pushing for increasing the energy efficiency of the housing stocks, and even inventing solar panels based on organic materials, like discarded oranges (!). They are low-efficiency, but super-cheap, and they come in colors (oranges pulp is bright red in Sicily!), so they have a lot of potential whenever designers are involved.

Now, this is a very elegant move. In one go, they greened the economy; created a new local player who would further green it long-term; provided a tangible benefit for the local community; bought themselves a lot of goodwill; and turned a lump of “dead” money into a 20-years guaranteed revenue stream. Finance, as it should be!

My intention is now to spend a week or so in Messina, and really understand how they do it, also as inspiration for the future Reef. I would love to share this experience with @noemi, @nadia, @matthias, @patrick_andrews, @lasindias, @richdecibels, @phoebe… who else?

I think I can swing hospitality for a few people, if I ask nicely and if we are ready to give back, for example organizing a small event on new co-operativism and post-capitalist enterprise. Also, they eat like gods

9 Likes
How to build a world: a webinar with the Worldbuilding Academy's core team
:orange_book: Networking for Green and Communal Living
Next content curation call happens Tuesday 9/7, 16.30 CET
Weekly Update: Please update this list of content to promote for the coming week
What can we learn from Messina’s economic model?
digiogi February 3, 2019, 10:10am #2

How amazing to discover a working example of a genuinely innovative model for developing local economies! I’ve just completed an MRes (nominally in Architecture) in which my actual research went into developing a way of mapping and designing local economies to better understand productive v extractive models, addressing a specific current ‘regeneration’ scheme in my neighbourhood (in South London) as a real-world case-study. Currently researching the best place to undertake a PhD on ‘post-entrepreneurial innovation’ at local/city/regional scale. Like the idea of contributing to an event. And love food! I can be reached at steve@studiostevetaylor.com or Twitter @digiogi.

Noted, @digiogi. Can you say a bit more about your work? Any link anywhere?

And for the logistics, stay tuned, I will be sharing news here as they come.

"In the early 90’s, after the mafia murders of the most important Italian anti-mafia judges and a long period of killing, in Sicily we thought we could change the world only with the enthusiasm of our activism"
noemi February 3, 2019, 10:41am #4

Wow, thanks for sharing this, it adds so nicely to our great case studies to look up to!

I have many questions - but one is: how does founding this new market and company (Solidarity and Energy) map onto what people in the crowd were already doing, the skills they had, their aspirations?

It’s one thing to dream a way to contribute to the community and launch new socially minded activities, and it’s another one to converge from what is possible (market gap, funding ops etc) towards what we as a group want/can pursue. This is what I feel we dont have yet: ER atm is research and community building on x,y,z. We are missing the conceptual partner who wants to do one thing well - which is essentially another company i.e. “greening”, with mobilizing all knowledge and people towards just that.
The dreamer and the expert/doer. This will be interesting because it means forking as a company? Nothing new in this, but I wonder if that is the gap which we still need to fill in the conceptual phase already.

Of course, sign me up for a Messina scouting trip!!

of which Horcynus Orca is only a piece, specializing in the arts.

Very interested in this! Will look forward to hearing results of your future research and reflection.

Very interesting. When were you imagining for a group visit? And thanks for the tag!

Nice one, thanks for the ping @alberto – if you’re thinking mid-March perhaps we could swing it as Nati and I land in Modena on March 5th for a CivicWise gathering.

When were you imagining for a group visit?

Not sure… I have written to Gaetano today. Late March? April? But a lot depends on them.

So interesting! Willing to collaborate on this @alberto

One prominent product of the intersection of post-neoliberal economics and urbanism is a renewed focus on local economies, a development that spans theory, practical projects and alternative government policy. Yet it is almost impossible to find a satisfactory definition of what a local economy is; how it is defined or delineated; or how it might be modelled. Much of the discourse that exists turns out, on examination, to be not ‘economic’ at all, but a proxy for other concepts such as community, a process that weakens and distracts attention from the actual understanding and planning of robust, sustainable local economies. This dissertation adapts a model for mapping capital flows from the work of the critical geographer David Harvey and applies it to the highly contested plan for ‘redeveloping’ the Elephant and Castle Shopping Centre in south London. Mapping the developers’ proposals in this way demonstrates the almost wholly extractive nature of the local economy that the scheme would produce. The paper then uses the same technique to design an alternative scheme that potentially creates a genuinely ‘local’ economy. Whilst - taken as a whole - this option is admittedly utopian, it is nevertheless constructed from a number of actually existing alternative models of ownership, collaborative and cooperative enterprise, re-municipalisation and so forth that are already happening across a range of cities and towns in the UK, Europe and beyond.

and the full dissertation (if you have the time to read 10K words?) is here: https://drive.google.com/file/d/12rwDFKxhhMglXvqajjiXZbNy4eC1GPti/view?usp=sharing

Thanks @alberto Yes, definite interest from me too. Subject of course to timing (I could not make early April).

Update to all: I received an email from Gorka Espiau, a guy I know who is working in the Mondragon space. They are considering supporting a gathering of post-capitalist enterprises, probably in Bilbao, probably in June-July 2019. If interested, stay tuned.

Gaetano is also very positive towards the trip to Messina. I am looking at May or June right now, which is a great time of the year to be in Sicily!

Yesterday our mail contained an advertisement for a company called Brusol, that seems to have exactly the same financing model of the Messina crowd.

It has an additional precious info:

So, this is a kind of impact bond. The region will have to pay up if it does not meet its goals. By giving away energy for free, it is still making a gain as long as the cost of the free energy is lower than the fine. This is a mechanism we can exploit for the new Reef.

After 6th June works much better for me… Sometime mid month. Fingers crossed.

I think we are all interested in this one!

Moved from #campfire to #earthos:the-reef.