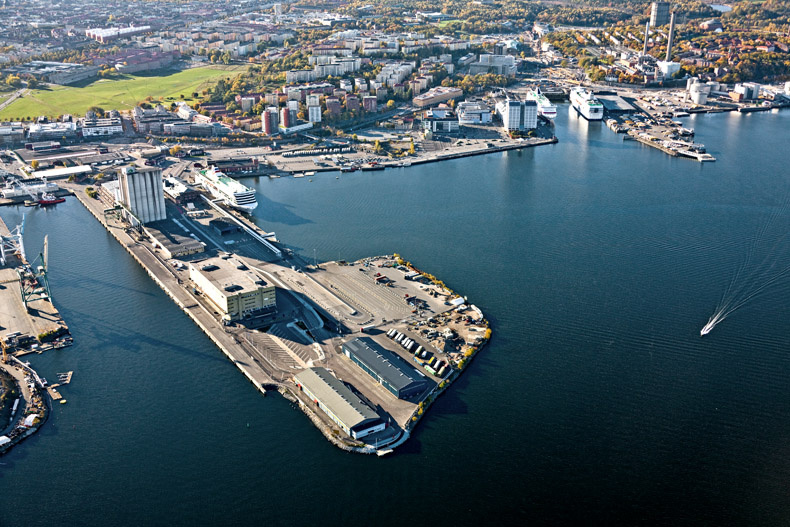 In December, I will represent Blivande and the perspective of creative communities in maritime hubs at Deep Dive in Valencia. It’s an event that focuses on accelerating learning between a broad range of participants who are driving environmental change in their own community , both in ports and other industries and creative hubs where innovation happens.

Frihamnen, the port in which we are located, has been the main container terminal in Stockholm. In 2020 it will be replaced by Stockholm Norvik Port, while Frihamnen will keep receiving ferries to Finland and the Baltics, as well as larger cruise ships. In the next decade, the development of a new residential area will commence. Blivande is one of the very first new creative communities that move into Frihamnen.

Blivande at the Ports of Stockholm 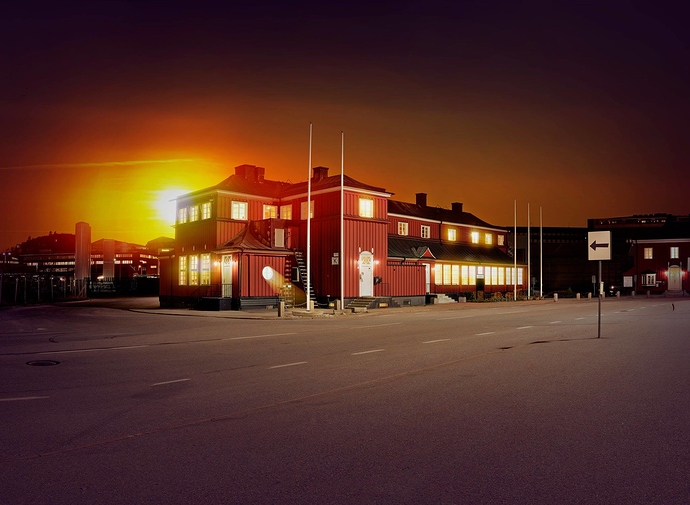 What can creative communities contribute to innovation in maritime hubs? Our community organization Blivande is working with the Ports of Stockholm to answer that question. In November last year, we got the keys to a 1000 square meter house in one of the harbors of Stockholm.

This house is now home to a growing ecosystem of initiatives and organizations. Over 300 people have some affiliation with Blivande and make a monthly financial contribution. Most are monthly donors of 10 EUR per month and participate in daily community events, but some have moved their art practice or business to Blivande. Blivande houses a workshop for makers, artists and professionals craftspeople. We have a beautiful co-working space with a creative and familiar vibe.

Blivande is an especially good fit for entrepreneurs who need access to both beautiful offices and light machinery and equipment for prototyping. Having space for entrepreneurs that create something material or do contract work sets us aside from other co-working spaces. We are not an incubator trying to foster the next killer app, we are first and foremost a community and an ecosystem where people benefit from each other’s skills and services. Businesses at Blivande include a welder, a plumber, a simulation expert who builds his own sensors, two architects, a robotics expert, a YouTuber, multiple programmers, an industrial designer, two photographers and artists in a wide range of disciplines.

In UNESCOs Recommendation on the Historic Urban Landscape, Urban Heritage is roughly taken to mean that a place contains traces of past generations. Keeping traces of what came before creates continuity and identity in a city. For us at Blivande, this means that when the freight containers disappear from Frihamnen, we would like to keep some of them behind. This is exactly what creative communities are often good at doing in industrial and post-industrial environments.

Frihamnen just celebrated its 100th anniversary. In honor of its history, we collaborated with the Ports of Stockholm to build the first phase of a creative hub with containers. We built a colorful container village full of art and activities as a backdrop for their celebrations, which now gets to stay for at least one year, and hopefully longer. 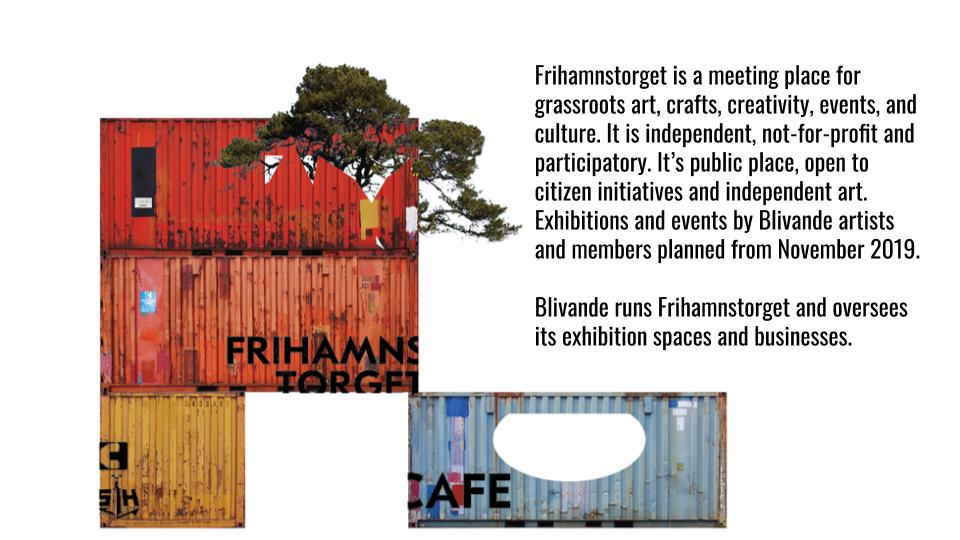 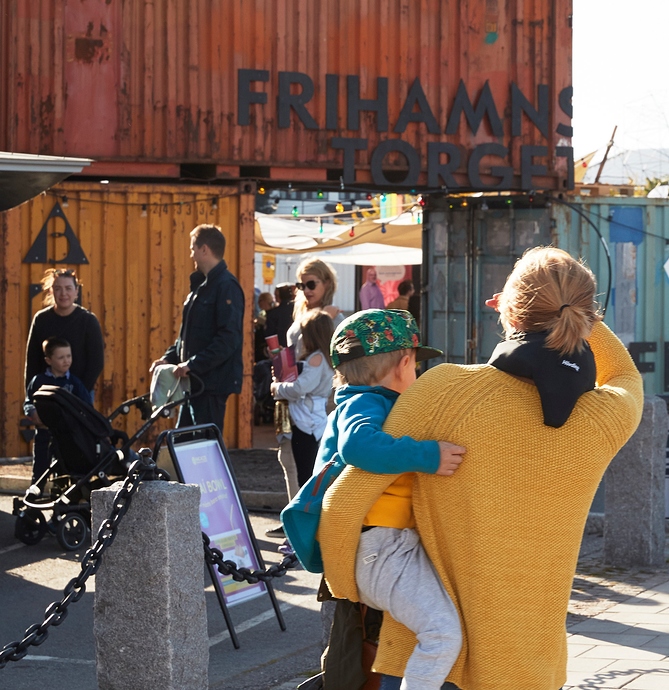 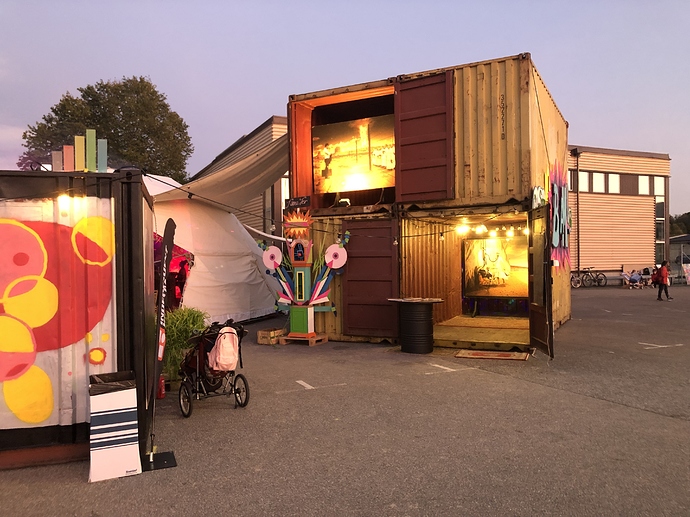 Our colorful container village allows us to:

Frihamnstorget should be a true “third place”. It is not just a place for culture and art but is itself a beautiful and exciting work of art. Frihamnstoget questions established principles of city planning and placemaking in Sweden today, and we are tilling the earth for the creativity of its members.

Frihamnstorget is a work of art with no single vision. It is co-created by the initiatives and creativity of the different people and organizations involved. This process of co-creating a public place through citizen initiative is itself a work of art and an experiment in democracy and creativity. It should feel like a tiny container village, full of art and culture, but also workshops for craftspeople, creative businesses, food, and drink.

Frihamnstorget and Blivande should also be a foundation for community-run and community-owned businesses, creating an opportunity for people to create good lives for themselves and others.

As we all know, nothing lasts forever. Eventually, our containers will have to be moved. However, some buildings live longer lives than others. For example, we are hoping to stay in the house for at least 10 years. Other structures we occupy or build might have shorter lifespans. You might call it a philosophy of temporary permanence. We are learning a lot on how to build a community in these conditions from the creative communities of Aarus. One of them is Institute for (X), perhaps our biggest inspiration for Frihamnstorget. 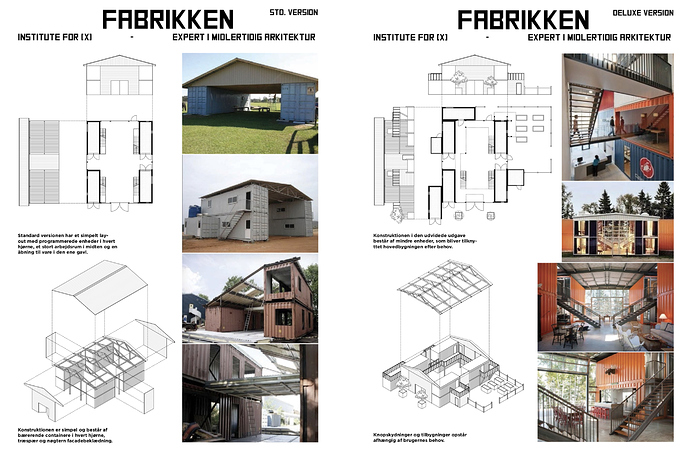 Integrating these sorts of structures into industrial or post industrial spaces can mean that areas that would otherwise be devoid of human activity and culture suddenly come to life. Institute for (X) have referred to this as moving from a model of instant reconstruction which leaves big open wounds in a cityscape for years. 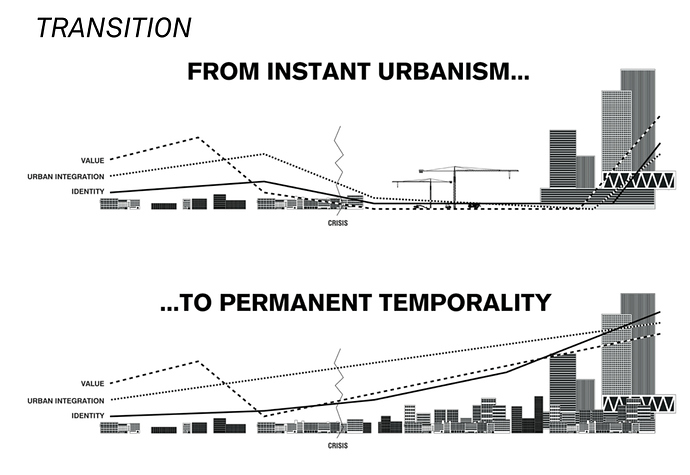 An important part of becoming more sustainable and energy-efficient is to switch to more modern technology. New technology often requires new buildings and infrastructure. One example of this is how container freight shipping makes warehouses in ports largely redundant.

According to the World Green Building Council, 11% of worldwide carbon emissions come from construction. This means that the embodied carbon footprint of a building is immensely important. If a building is in use for longer, more value is extracted from that embodied carbon. Putting these buildings to use instead of tearing them down might be among the most efficient sustainability actions one can undertake.

Of course, old buildings have other problems. They are badly insulated and air-conditioning or heating them is often very inefficient. This causes problems if you rebuild them into hotels, traditional apartments or high-end offices. Creative communities often solve these things differently as they are often looking to minimize costs. Expensive air-conditioning often isn’t an option. A music venue, a photo studio, an art workshop or a gallery space does not have to be temperature controlled in the way an office does. Creative communities also often find innovative ways around these challenges, like building custom insulated parts inside buildings.

It’s also the case that a high concentration of creative communities is likely to foster experiments in urban greening. It’s hard to imagine that the wildly successful High Line Park would have become a reality without the creative communities of New York pushing for it. A bridge with a huge embodied carbon footprint became a green oasis.

I’m really looking forward to the discussions we will have at Deep Dive. Involving and nurturing creative communities is only one aspect of developing sustainable maritime hubs, but I think that the case for creative communities being a way to extend the life of buildings and infrastructure and lowering the impact of the embodied carbon footprint could be an especially interesting topic to explore.

This is lovely, thanks @hugi and looking forward to hear the story live, in Valencia!

I was at a Trans Europe Halles camp last week, and Institute for X were around, I think @marina talked to them a bit? They looked like they are doing great things. They recently lost 60% of their space and the story was that this shrinking in infrastructure actually made their organisation stronger, or more cohesive. They learned a lot.

Yes, I had a conversation with an architect Thor Vingolf Nielsen, mostly about how our platform works, he was interested to join the conversations and share what they do, hope to see him here

Welcome to Edgeryders dear, don’t hesitate to introduce yourself here in a comment!

Those were some awesome discussions we had and it was super nice meeting you in person @hugi!

I’m very much looking forward to going through our notes an d nnulling over what kind of MVPs one could really push for without too much coordination.

@hugi on a pretty unrelated note:
Here’s a rough “iin mmememedias res” glimpse of the mp3 thing (strictly speaking an untypical one)

As discussed we’d be happy to write it up in detail and drop an article or two in the nordic section if you can imagine any sort of fit.

I’m very much looking forward to going through our notes an d nnulling over what kind of MVPs one could really push for without too much coordination.

Yes, indeed! I think there was quite a lot of valuable stuff there to act on. I had a great time in our conversations, looking forward to more collaboration!