Call for feedback: What did you think of the Harmonious Hackathon at #lote4? 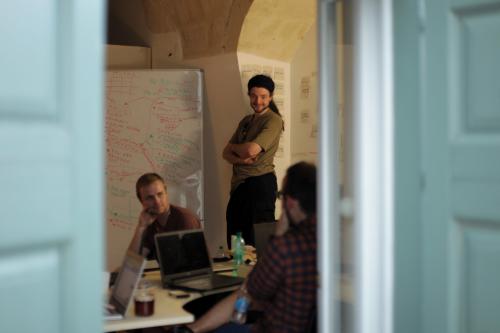 During the community meeting the day after lote the consensus was that it makes sense to keep doing them. But more often than just once a year, more as a recurring thing that runs on a regular basis as a p2p support infrastructure.

So we would like to build on what we learned and keep developing the format and turn it into a fun, useful and economically viable line of activity for everyone involved. I have committed to do business development, fundraising and outreach for a series of Harmonious Hackathons next year and welcome 1-2 more people  to join the core team. I would especially welcome help with the tech coordination (especially the requirements engineering bits).

I believe it makes sense to start by learning from the experience: If you can answer three questions that would be very helpful.

yes. no particular time of year. place anywhere reachable from Berlin – I guess that includes most of europe!

[this is the website strand; I think kiderwind went somewhat differently]

I’d love to take part in a hackathon around writing something – book sprints would be an inspiration here. It can involve a lot more people than a purely technical hackathon, and can break down well into small tasks. e.g. imagine if edgeryders got a gig preparing some report, and we (at least partly) wrote it through hackathon-style collaboration.

For more technical hackathons: I’ve also proposed hack necromancy as a theme. I’d also be interested in anything else, provided it has a well-specified and plausible objective. I’m much more interested in hackathons to continue an ongoing project, rather than always trying to build something new.

Thank you and next steps

thanks @danohu. I synthesised it into a new wiki where we are co-designing/building the next Harmonious Hackathon. I’ll try to ping the others so we get more feedback from more people who were there for the first one…Im also having a chat with Annemarie about this on thursday in case you’re interested in joining us mail me nadia@edgeryders.eu

Some feedback from my side (participating in the website track of the hackathon):

feedback from a “non-technical” side

for the 1st question : generally am up for another hacking. it depends if I can be more useful as a non programmer. For the place and time , since I am not in Europe now , I am up to help organize something here in Egypt to hack in parallel with you. It could be also good to have different spots in Europe- if it is feasible in terms of workload , coordination and so on -

hack4gaza that was co-organized by @elf_Pavlik was kinda successful in this as it happened in Algeria and Berlin at the same time , couldn’t happen in Egypt due to political reasons , All physical spaces were uploading their projects here.

for the 2nd question  : here is my feedback as non programmer.

as @Matthias mentioned either you learn durpal or work with something you know in the 2 days span, so for me it was like a crash course in Durpal , which was really helpful as I wouldn’t have learned how to be familiar with it except for this way and now I am trying to learn more without thinking that it is very complicated ,

before starting the hacking I was expecting that I would help with some visuals and text and it turned out much more better as I wasn’t excluded from the process as a non technical person.

It would have been better if we knew in advance the task and skills of the participants. for example @Matthias was overloaded with work as he was the only one who can do this work so if only there was someone who can help him things could have been much faster and easier.

Also I agree we needed an ending.

another thing which emphasis the harmonies issue , it was really nice to see @Björn_Ekblom 's findings in the hackathon in a session during lote, and wished to know more about the kiderwind in a session , may be I missed it ,

for the 3rd question :

as “follow up is everything” , we need to follow up and continue working on this durpal platform. but generally I prefer more kiderwind-like projects. I am trying to "hack the tape " but searching for more “technical” people here, could be easily integrated  as a track in the next hackathon.

My feedback and closing

What happens to our feedback now?

Hi guys, sorry it took so long to get back!

I am incorporating them into a the call for action for a harmonious hackathon to take place somewhere in Brussels in connection with the Open Source Circular Economy Days. I was just waiting for the right context which it made sense to refine the format based on what we learned, and put it to the test in service of projects we want to support. Without having to build a whole lote scale activity.