Deadline April 8: Up to £800k for feasibility studies into Circular Economy business cases up for grabs

Thank you @CommonFutures for alerting us about an interesting opportunity for people running Circular Economy initiatives.

"Innovate UK is to invest up to £800k in feasibility studies into the business case for retaining value in durable goods through reuse, remanufacture or leasing/maintenance.

We are seeking projects that explore commercial models for a circular economy of goods in which resources are kept in productive use for longer following primary production – ideally at the same value/use. Projects will be expected to design a pilot to demonstrate how the model could become part of normal business.

Feasibility studies (mainly pre-industrial research projects) must be collaborative and business-led. Projects are open to companies of any size. Consortia should include a business that has a relationship with the final customer and can enable the return of products.

The amount of funding you can receive varies according to the type of organisation and type of research being undertaken. Funding levels for feasibility study research will change for competitions opening from 1 January 2015. For further information please refer to http://interact.innovateuk.org/funding-rules

We expect projects to last 6 months and to range in size from total costs of £25k to £50k.

Im up for submitting an application

I would like to run an experiment on Makerfox in the context of organising, the OSCE Days, and their aftermath. It would be great to do a moneyless crowdfunding campaign to build the event and the incubation idea you mentioned in this comment, what do you think? If anyone wants to join me in putting this together, leave a comment to my comment

I have successfully bid to the precursor competition to this

To do a remanufacturing/service design project with some industrial partner. So I know what a successful bid looks like. Myself and Erica have already won sponsorship from Innovate UK for the London OSCEdays. We know the people there, some better than others.

Are you suggesting submitting the ‘experiment’ as the proposal? And which part of Matthias’s comment are you referring to?

They are looking for something commercially viable, that can demonstrate clear environmental impact reduction.

after a beer and a long day: The amount of time and resources  that go down the drain due to lack of open access to information, interoperability and efficient coordination between smaller actors is not something I have data about. But looking at failure rate of startups and you start to get an idea.Also, lack of liquidity means that many possible business innovations/improvements never see light of day.  Is it possible to develop a global marketplace for circular economy goods and services? Could OSCE days function as a prototype of how such an incubator/marketplace could be built? We have the novel markertplace (Makerfox), practice in distributed coordination/collaboration at scale (Edgeryders) and context (OSCE Days).

As I understand Sharmarval, this funding is for commercially viable business models, so proposing a circular economy incubator or something else that is meta-business does not really fit. They (the funding programme) understand themselves as The Incubator in this case, so we would not want to touch their territory I guess

But. A sustainable marketplace is a possible thing to apply with imho. The pilot could be operated within the OSCE context, but ultimately the actors on it are exchangeable. The novelty is that, when using the Makerfox tech for this, it is a marketplace that allows to exchange items that nobody sells for money in affluent societies.

Most used items simply get trashed when no longer wanted, some get donated, some break, but even broken ones consist of usable parts. But then, the problem is the wide variety of parts, unsuitable as raw material for production. Very suitable for hackerspaces though. Hackerspace people like to repair things. All repairs are shallow with many parts. For real. Like: look through the Internet for two hours to find a compatible spare part for a 10 yrs old jigsaw, hope it is compatible, order it, get it, of course it doesn’t fit, set out to create your own part on a lathe, then find a compatible part around in boxes of stuff (from a broken jigsaw that left a few parts over). Happened to me last week. If people would offer these kinds of parts or broken machines in large numbers, all repairs would be easy rather than always being about trying ones luck again like now. They don’t, because you don’t get a reasonable amount of compensation currently: 5 EUR for a broken jigsaw on eBay, c’m’ on, 97% of people don’t offer it for that price. But if they can get repair services for their other broken items in return (which they’d normally also trash because service centers charge more for repairs than shops for the next gen of products), the situation changes. If you look at it, nothing is really broken. (My one-off biggest personal success was repairing a video projector with a part of a street lantern, a Super8 switch, parts of neon tubes and a Tupper box. And two months ago I found THIS long document on repairing AC adapters. Totally above my level of electronics, and a nice demonstration of what skilled people can do.)

The reason all this stuff does not get repaired is because “it’s not worth it” when using standard labor and manufacturer-supplied spare parts. But when matching ten 90% non-broken things into nine 100% working things, it’s different. So, we have this possible template for typical network barter deals on a sustainable marketplace: 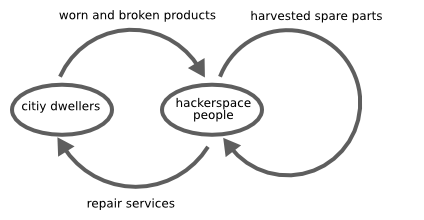 So, a matching space for spare parts, broken things and repair skills, using a metro area like a giant distributed warehouse (would have to start locally, as there’s little meaning to ship stuff worth 2 EUR in money). I guess with this, hackerspace and repair cafe people will get all their stuff for free, plus food and accommodation and more stuff that they repair for themselves and can sell for real money. Whether hackers make a business out of this or do it on a private basis, repair cafe style, is up to them. The marketplace is unaffected by that, earning a commission in barter value on its own.

Sorry, just raw thoughts here from a tired mind. “Could be creative, could be real nonsense.” You just don’t know by yourself when you’re tired

On a UK level, there’s a list of org’s here.

On a London-based local level, there’s the Restart project.

From a design-for-reuse-repair-recycle point-of-view, there’s the OpenStructures project. Creating standard parts, and building things that are based on those parts, would be two other potential businesses, that could tie in nicely with the other work we’re already doing on our own infrastructure…

From a personally-practical point-of-view, look at the standards relating to bicycles. I turned 4 damaged / disfunctional bike wheels, into 3 fully functioning bike wheels, a spare hub unit,a stock of bike spokes, and some scrap aluminium for metal-casting.

The metal-casting was part of fabricating parts for a lathe, because it was quicker, cheaper, and more interesting than waiting 6 weeks for the delivery from China.

Let’s see what they think?

hi @janetgunter, perhaps you guys may be interested in this discussion in the context of Open Source Circular Economy Days? Annemarie shared the call above, and we’re exploring possibilities for generating resources for the coordination work in ways that set foundations for more long term impact.

To the others, Restart project visited unMonastery Matera a while back (see the writeup Kei posted for more info).

Ugo Vallauri, Restart’s co-founder, is Italian and was one of my students at a Summer School. I greatly admire what he does (and was doing already at the time). We stayed in each other’s line of sight, and that was the background of Janet’s visit to Matera. You guys all seem to be well connected, but in case you need me to I will be more than happy to reach out to Ugo.

That would be great!

“Like: look through the Internet for two hours to find a compatible spare part for a 10 yrs old jigsaw, hope it is compatible, order it, get it, of course it doesn’t fit, set out to create your own part on a lathe, then find a compatible part around in boxes of stuff (from a broken jigsaw that left a few parts over). Happened to me last week.”

Oh, Matthias. You are the very definition of positive deviation.

You even came up with a money quote: “If you look at it, nothing’s really broken.” Brilliant!

Ok, to business. I think your idea makes sense, but it could be difficult to fund, because:

To me this sounds more like a community innovation project that could be suited to a Nesta/WRAP bid. When they speak about business model innovation they are typically talking about scalable, innovation-led, commercially viable business models that disrupt existing routes to market, extend product life times in as good as new state, and increase access to goods (first life)…quite specific with a clear return on investment. Though this is feasibility…so could be more flexible. Perhaps, it is worth speaking to them.

@Billy Smith I’m loosely involved in setting up a new maker space through Meanwhile Space and Action Now. There is also The Remakery and The Goldfinger Factory who are processing products/parts and materials to some degree.

The Remakery is in flux right now…

They’ve been setting up and refurbishing the space they’re got.

What about getting a unit’s worth of their workshop space, and using that for a dedicated project?

It would help act as the infrastructure supply for the rest of the space, so they themselves would benefit.

Meanwhile spaces are great for pop-up events, and mobile makerspaces, but you can get a lot of places on a longer-term leases.

There were two Olympic legacy projects, The Caravanserai, and Core Landscapes, which were able to get two-year rolling leases, so they were able to build more long-term plans.

When you can guarantee being able to have the space you can afford to spread the cost over a longer period, so you build with that length of time in mind.

Those projects got access to some land that was due to be part of the Crossrail extension project, so they’ve got definite limits on how they operate, but it’s longer than the average pop-up site.